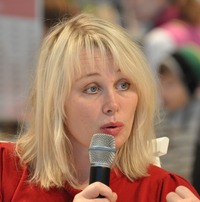 Ann Heberlein is the author of the new book On Love and Tyranny: The Life and Politics of Hannah Arendt. The book is translated from Swedish by Alice Menzies. Heberlein is based in Sweden.

Q: Why did you decide to write this biography of Hannah Arendt, and what impact has her work had on you?

A: Hannah has been a companion, some kind of good friend, one might say, for many years now - I got to know her philosophy as an undergraduate student and have since then read her with increasing interest.

During my doctoral studies, I stumbled upon a copy of her correspondence with Martin Heidegger and was fascinated that this seemingly sensible and wise woman allowed herself to be swept along in a passion that to a certain extent was fundamentally irrational.

The discrepancy between the philosopher Arendt and the woman Hannah caught my interest. Perhaps I also recognized that kind of paradox in myself and my own life.

Every now and then the idea arose to write a biography of Hannah Arendt. I wanted to investigate how her life and experiences affected her thinking and writing.

In 2018, I finally found time and opportunity to fulfil the project. At that time, I was well acquainted with Hannah Arendt's philosophy and the external circumstances in which she lived.

I was not yet so familiar with her private life. I had read a lot about her passionate relationship with Heidegger, but knew much less about her warm and trusting love for Heinrich Blücher, her wedded husband.

Hannah Arendt's thoughts on forgiveness play a crucial role in my doctoral dissertation, and since then I have returned to Arendt's philosophy in all of my books.

I have written about responsibility, about guilt, about evil and about goodness and Hannah Arendt's thoughts on these central existential and moral problems have been very important in how I have come to treat these problems myself.

At the same time, as I read Hannah Arendt’s philosophy, I became interested in her life and the historical context which she occupied. It was clear to me that her philosophy is intimately associated with her personal experiences.

I wanted to confer the following to my readers: Hannah Arendt is as far from an "armchair philosopher" as you can get. She makes philosophy out of her life, she never refrains to pose the really difficult questions, she really wants to understand - also what seems hard to understand, like evil, which to a certain extent is defined by its very “incomprehensibility.” 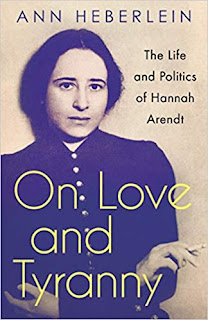 Q: What would you say are some of the most common perceptions and misconceptions about Hannah Arendt?

A: Hannah Arendt undoubtedly belongs to the exclusive group of intellectuals whose theories have become some kind of public property.

Arendt's concept of "the banality of evil" is known far beyond academic and intellectual circles, and her reasoning about man and his responsibility has made an impression on the public at large.

This phenomenon - being an intellectual superstar - inevitably means that a lot of people will enjoy a lot of preconceived opinions on who you are and what you think.

One of the more recurring misconceptions is that Hannah would have been "left" or "right" in a narrow ideological sense. I personally have a strong feeling that she would not like to be labelled in the banal way.

Although Hannah defined herself as a political thinker and theorist and wrote and discussed politics throughout her adult life, it is almost impossible to put these kinds of labels on her.

She does not fit into any of the traditional categories, right/left, conservative/liberal, nor did she want to make any such position clear. She was undoubtedly a political animal, but a political animal without a particular colour code.

My view is that we, who read her today and who are impressed by her thoughts, have to respect that. No one owns Hannah Arendt.

Hannah Arendt may sometimes come across as demanding, or even harsh, in her moral stance, but she does not demand more of others than she demands of herself. It becomes clear when you immerse yourself in her life that she places very high demands on herself: Every human being has a responsibility for how she handles her life.

"I don´t fit," Hannah Arendt once said about herself. And just as it is hard to give her an ideological label, it is equally difficult to pin her down philosophically.

In her many texts, she manages to touch on topics of importance to most people, in a way that speaks in an almost popular fashion, without sacrificing her integrity as a researcher.

Arendt wrote essays for newspapers as well as academic monographs and showed that it is possible to combine a large and glowing community involvement with academic zeal and credibility.

Q: You write, "What can we learn from Hannah? That we should love the world so much that we believe that change is possible, and that we should never give up." How would you like to see this realized in today´s world?

A: Love is in and by itself demanding. It calls for action, for defence, for responsibility. In Hannah's “philosophical diary,” her Denktagebuch, there is a reflection on love and evil.

The love Hannah discusses in relation to the world is not love in the conventional sense. To love the world means to understand and be reconciled with the world as it is, in all its imperfection and frailty - and reconciliation is necessary for its continued existence.

For Hannah, it was about "understanding and accepting what really happened." How can we love the world after the Holocaust?

Hannah connects the love of the world, Amor mundi, to responsibility, reflection and judgment. To love the world means to take responsibility for the world, to reflect on one's own actions and understand how they affect the world.

In her reasoning about love of the world, there are parallels to her thinking about evil. Hannah believes that indifference can be a breeding ground for evil - and the opposite of indifference is reflection.

To love the world, and by that also life itself, is a kind of hope, a spell if you will: To love the world is not to give up your hope that change for the better is possible. What we can learn from Hannah is perhaps to never give up that kind of hope.

I believe that it is important to remember this – in particular at a time when humanity is facing several different challenges that seems to require rather imminent solutions.

The optimism that characterized modernism has in many ways been transformed into equal parts of hopelessness and anger. Our hope for a peaceful and civilized world, the world as a safe and friendly place, have come to naught.

We thought that we could defeat hatred, racism and war, find cures for plagues and pandemics, we thought we could create security and dignified lives for everyone.

Now we stand with shattered hopes, disappointed and shaken. Everything we thought belonged to man's darker history suddenly seems possible again. One of the lessons that Covid 19 has taught us, is that anything can happen.

We must not let hopelessness or anger take over. Hope and responsibility, cooperation and hard work are still very helpful tools that may save both humanity and the world.

Q: How did you research the book, and did you learn anything that especially surprised or intrigued you?

A: I have had a great help in the very fact that so much of Hannah Arendt’s correspondence is preserved and available. This gave me invaluable information about events in Hannah's life, but also regarding Hannah as a woman. She was an incredibly friendly, loyal and caring person, with a strike of dark, often mischievous sense of humour. Add to that her passion and stubbornness.

Through Hannah, I also came to know a wide circle of intellectuals who were active at the same time as her. She had many friends, colleagues and acquaintances, and I was in particular fascinated by her close and deep friendships with Mary McCarthy, Gershom Scholem, Hans Jonas and Karl Jaspers, to name a few.

An acquaintance I greatly appreciated is Walter Benjamin. His tragic fate is a story inside the story of Hannah. Walter Benjamin's suicide, on the verge of freedom, shook Hannah and became a fundamental experience in her life.

A: I have just completed a project of a more autobiographical nature that will be published this autumn.

Otherwise, I am sketching on another philosophical biography about a woman who, in her particular ways, violated boundaries and challenged norms, namely Ayn Rand, the film student who fled the oppression of the Soviet Union in order to live in what she perceived as the promised land of freedom, America.

There are parallels between the lives of Ayn Rand and Hannah Arendt and both have had great but different impacts on our way of looking at both the world and man. Hannah Arendt was preoccupied with love, evil, and tyranny. Ayn Rand's thinking revolved around freedom and oppression.

The big challenge when it comes to write about Ayn Rand is that she is patently a very much less likeable person than Hannah Arendt, to say the least. I immediately fell in love with Hannah Arendt. I have more mixed feelings about Ayn Rand, but she is nevertheless fascinating, both as a thinker and as a person.

Here I want to explore what was vulnerable, in a woman who construed herself as strong and independent. Let us see if I succeed in that endeavour.