Ana Lal Din is the author of the new young adult novel The Descent of the Drowned. A Danish-Pakistani writer, she is based in England.

Q: How did you come up with the idea for The Descent of the Drowned, and for your characters Roma and Leviathan?

A: Initially, I wanted to write a story that explored the perception of women through time. So, I read about Eve in Judeo-Christianity and Hawa in Islam, and I read about female archetypes in Western and Eastern cultures.

However, I was preoccupied by how women were perceived in my own culture because we still see our daughters as burdens, still raise them to be inferior to their brothers, husbands and sons.

At this time, I was also following independent media outlets reporting on things that the mainstream media was largely mum about, such as the persecution of the Rohingya People, and I was feeling powerless.

I chose to channel that powerlessness in a productive, meaningful way by penning a story through which I could represent critical issues and bring marginalised voices into the centre, including the voices of underrepresented South Asian women.

With Roma and Leviathan, I wanted to write humans that lived through brutal experiences and were mentally, emotionally, and physically trapped by their social and cultural heritage. 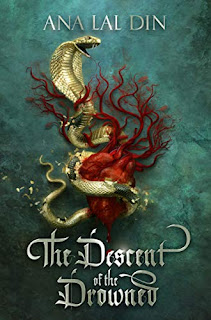 Roma is a sacred prostitute and rape survivor who questions the toxic belief system wherein she has been raised, while Leviathan is a morally grey prince and soldier with a personality disorder who is considered casteless in a society where one’s caste determines one’s worth.

Both protagonists want to break free of their sociocultural bonds to ultimately rebuild their fractured identities.

A: I knew. But I also made changes along the way because I allowed the characters to guide me and, at times, they led me down a different path than what I had planned for them.

Q: Your website says, "Passionate about culture, language, religion, and social justice issues, Ana's story worlds are usually full of all four." How do the four fit together for you in your writing?

A: For me, as an #ownvoices writer from a multicultural background (as well as a human being), all four elements are intricately connected.

Temple prostitution is being masked as a religious service; honour rape is being used to punish lower castes, especially women; and ethnic groups are demonised and massacred because they have a different ethnicity and religion.

Moreover, all these issues exist within the same world. Understanding the complexity of our world, it’s not possible for me to write about one element without the other.

A: I hope readers experience strong emotions when they read it, and I hope that the content provokes thought and spreads awareness.

I have attempted to challenge the YA fantasy genre with a character-driven story that doesn’t quite follow the expected YA fantasy hit formula for a fast-paced, plot-driven novel.

It’s a risk I have taken because I want to push the boundaries of the genre and hopefully carve out a place for “niche” stories in the YA fantasy mainstream market.

A: Right now, I’m revising the sequel to The Descent of the Drowned and working on a different YA fantasy also set in an Indo-Persian world.

A: Thank you so much for featuring me on your blog, Deborah!