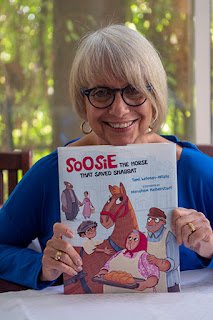 Tami Lehman-Wilzig is the author of the new children's picture book Soosie: The Horse That Saved Shabbat. Her many other books include Stork's Landing. She lives in Israel.

Q: How did you come up with the idea for Soosie: The Horse That Saved Shabbat?

A: Years ago, when I was an advertising copywriter, operating a busy, deadline driven business for Israeli exporters, I read an article on Angel Bakery – Israel’s leading commercial bakery.

The article provided a history of Angel, which goes back to 1927, and noted that it began as a flour distributor using a horse and wagon for deliveries. One day the driver was sick and didn’t come in. What would be with the day’s deliveries?

The owner came up with a brilliant solution: The horse knew the way. It would make the deliveries on its own. I read that sentence and said to myself, “That’s a children’s story.”

So I clipped the article and filed it, returning to my advertising work. Deadlines came and went but I never forgot that line. Ten years later I created an original folktale around it.

Q: What do you think Menahem Halberstadt's illustrations add to the book? 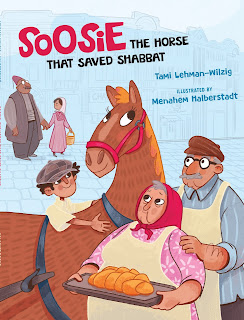 A: I think that one of the most exciting aspects of being a children’s book author is watching an illustrator bring your characters and story to life. I always look forward to the pictorial interpretation and I can honestly say that I am in love with Soosie.

Menahem is extraordinarily talented and the perfect illustrator for this story. Soosie comes across as a playful, loving, empathetic horse. Ezra and Esther? They are so warm and tender, I just want to sit in their laps and have them hug me.

Every one of the characters has a distinct personality, while at the same time, blend together. And the scenes of Jerusalem with its diverse population? Perfect!!!

A: I think there’s a lot to take away from this tale. To begin with, I’m a Shabbat freak, so first and foremost I hope it will reinforce a love for this special day.

Then there’s the relationship between Soosie, Jacob, Ezra, and Esther. They love Soosie and treat this horse as a family member. Like them, Soosie deserves a day of rest as well. This highlights the Jewish value of kindness to animals.

Finally, another Jewish value is seamlessly intertwined, and that’s respect for your elders. Jacob wants to do the deliveries despite his ill health because he knows that Ezra and Esther are elderly and can’t step in for him.

Also, my aim is to show that Israel is a warm, loving place to live. When I grew up in the States Israel was of paramount importance to all American Jews. That’s not the case today and I worry about that. I want American Jewish children to know that there is a Jewish State, a place they can visit, feel right at home and say, “This is mine.”

I love my Jewish heritage and view Judaism as the full package: it’s a religion, a lifestyle, and a culture. I want to convey this love through my books. That’s what’s important to me, especially in view of the high interfaith marriage rate. I don’t want the Jewish heritage to get lost in translation. If my books can make the tiniest bit of difference in a child’s life, then I’m happy.

Q: How did you first get interested in writing children's books?

A: It goes back to when I was a little girl and my parents’ love for stories.

My father had a wonderful imagination and was quite a raconteur. He verbally created a story series called “The Adventures of Pierre & Paul” and tucked me into bed every night with a new episode. My mother was a wannabe actress who knew how to read stories and bring them to life. Can you beat a combination like that?

By the time I was in third grade I wrote my first story. Somehow writing for children just stuck.

A: My hyperactive mind is going in several directions. I recently finished writing a fun story inspired by our granddaughter, on a little girl who doesn’t know how to listen because she talks…and talks… and talks.

Believe it or not, despite (or because of?) the argumentative nature of Jews, learning how to listen is part of the Jewish culture.

I’m also fascinated with Rembrandt and his wide use of Jewish models. I have spent numerous months ping-ponging ideas in my mind, writing and rewriting. Finally, I’m also brewing a Spanish Inquisition story.

A: Whew…I think that’s enough! BUT…for those who don’t know, I’m an American-Israeli author. We moved to Israel over 43 years ago and have never looked back. Over the past 17 years I’ve been writing children’s books for the North American market.