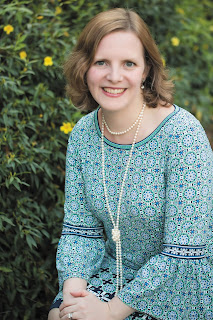 Lauren Willig is the author of the new historical novel Band of Sisters, which focuses on a group of Smith College graduates during World War I. Her many other books include The Summer Country. She lives in New York City.

Q: What first intrigued you about the Smith College Relief Unit, and at what point did you decide it would be a good basis for a novel?

A: I stumbled on the Smith College Relief Unit by accident while I was researching Christmas customs in Picardy in World War I for a book I was co-writing with Beatriz Williams and Karen White. Up popped a memoir by a Smith alum, talking about throwing Christmas parties for French villagers right behind the front lines.

My immediate reaction was, “This can’t be right!” What were a group of Smithies doing in Somme, dressing up as Father Christmas and attaching toys to fishhooks for a Christmas present draw? It sounded deeply improbable.

So, of course, I did what every good procrastinating author does. I dropped everything and immediately read the whole memoir.

It turned out that not only was this group of Smith alumnae there in the Somme in the winter of 1917, they were doing far more than throwing Christmas parties…. They were teaching classes to children, rebuilding villages, and, when the Germans started marching their way, heroically dashing into the action to save the lives of their villagers.

I knew, right then and there, that this was a story that just had to be told.

Q: What did you see as the right mix between history and fiction as you wrote the book? 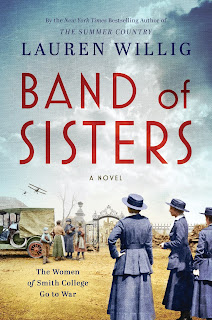 A: I have never had as rich a base of primary source material as I had for Band of Sisters. Usually, when I write, I’m triangulating around missing pieces, patching bits together from different sources.

In this case, the letters written home by the Smithies from the Somme were so detailed that I could pretty much tell you what they had for lunch on any given Tuesday! (And the pattern of the china that lunch was served on.)

So in the case of Band of Sisters, the balance between history and fiction weighed heavily towards history. The real material was just too good not to use.

Where I did depart from the real material, though, was the characters themselves. I didn’t feel comfortable laying the emotions and thoughts of the real members of the Smith College Relief Unit bare to public view.

I got around that by putting my own imaginary people in the place of the real ones, giving me free rein to play with their emotions.

In some cases, as with the two heroines of the book, my characters were entirely the product of my own imagination. In others, my fictional characters are very closely inspired by real people: for example, my fictional Mrs. Rutherford is a very thinly veiled stand in for Harriet Boyd Hawes, the real founder of the Smith College Relief Unit.

But if something happened in the book, you can be pretty sure that it happened to the real members of the Smith College Relief Unit!

Q: What do you think these women's experiences say about the roles women took on during World War I?

A: That’s a wonderful question. World War I was a time of rapidly expanding opportunities for women, building on the momentum already attained by the “New Woman” of the late 19th century and the Women’s Suffrage Movement.

Even in France, where gender roles were notoriously strict, women took up all sorts of traditionally male jobs in factories, as bus drivers, and street cleaners (although the government insisted they look feminine while doing it!).

One of the explicit goals of the Smith College Relief Unit—in addition to rebuilding villages and saving lives!—was to show the world what the American college woman could do.

Their founder, Harriet Boyd Hawes, a pioneering archaeologist and groundbreaker for women in her own field, was very clear about that in her pitch to create the Unit in April of 1917.

Yes, there was a hideous humanitarian crisis that needed immediate action—but that crisis was also a potential boon for American women, who could prove their ingenuity and drive to the world.

One of the first things Hawes did on arriving in Paris was to begin a press blitz for the Unit, whom she presented to the French papers as “Les Collegiennes Americaines,” writing home that a clear title in French was essential for getting the word out.

The Smith College Relief Unit weren’t the only women engaged in relief work.

Anne Morgan, daughter of the famous financier, had set herself up in the Chateau de Blerancourt (the Smithies, housed in army barracks on the grounds of a ruined chateau, really roughing it, wrote enviously home about Morgan’s intact accomodations!); Helen Frick, daughter of Henry Clay Frick, also got together a relief Unit.

One of the things that fascinated me in researching this book is how thoroughly these efforts seem to have been forgotten. When we think of women in World War I, the universal image is of nurses, in their long white pinnies and white headdress, tirelessly moving from stretcher to stretcher.

But there were, in fact, all sorts of female-led, female-staffed expeditions to bring relief to the suffering in the Somme, and bringing those back to light tells us a great deal about the mood of enthusiasm for women’s work, the sense of opportunities opening.

While the Smithies were in the Somme, they got word that New York had passed suffrage for women. “Hurrah for Suffrage!” one of the members wrote home, commenting that the women from New York and California were ribbing the others from more backwards states.

But for me, that encapsulated the general feeling in the Unit about women’s roles in the world; the world was opening up to women and they were part of that.

A: The triumph of hope over hopelessness. What touched me the most reading their letters and memoirs was how these women, from different backgrounds, with different skills, plunged into an unspeakable situation filled with suffering beyond any they could have imagined—and after a few moments of disbelief and doubt, they rolled up their sleeves and did whatever had to be done.

At times, it must have felt like emptying a lake with a teaspoon, but they kept at it, buying cows to obtain milk for starving children, wrangling school supplies, figuring out how to fix trucks in all weathers.

Whatever was needed, they did, learning to adapt and adapt rapidly—when the Germans invaded and they found themselves ousted from their headquarters, they evacuated villagers, set up pop-up food kitchens along the evacuation route, and even wound up directing traffic for the British army!

That’s what impressed me, and what I hope readers will remember—what women can do, working together. And how while good deeds may seem small or simple or silly, when you put enough of them together, they make a real difference.

A: Remember how I mentioned the real founder of the Smith Unit, Harriet Boyd Hawes? I became fascinated by her as I was researching and writing Band of Sisters.

Hawes was a brilliant, eccentric, divisive figure with a tangled past: after graduating Smith, she went off to the American School of Classical Studies in Athens in 1896, where she scandalized the locals by bicycling around the city in bloomers and scandalized her teachers by demanding to be allowed to excavate (women were expected to confine themselves to less energetic classical studies; it was suggested that Hawes become a librarian).

Along the way, she was swept up in the Greco-Turkish War, and was decorated by the Queen of Greece for her nursing during the war. And here’s where I really started to wonder…. Hawes is famous for excavating Crete. But. Before returning to her studies, she hared off to the States to join the Red Cross and nurse in the Spanish-American War. Then she went off to Crete and made her name.

What happened? Why the Spanish American War interlude? I couldn’t stop wondering about it, and as I wrote my own fictional version of Hawes, Betsy Hayes Rutherford, little hints about her past kept cropping up.

So that’s what I’m writing now! It’s the story of Betsy Hayes, a Smith grad who wants to be an archaeologist but whose life is changed forever by her experiences during the Greco-Turkish War and who redeems herself and discovers the woman she’s meant to be in the jungles of Cuba.

It’s a coming of age story, a war story, and a story about what women can do. While researching this, I discovered some amazing—now forgotten!—stories about the heroic women who nursed with the Red Cross in Cuba and I’m so excited to bring their stories back to life in this book. Smith II, the ReSmithening, will hit shelves in March of 2023—at which point it should have an actual title!

A: For those who want to know more about the real life Smith Unit, just head over to my website, www.laurenwillig.com, where you’ll find a Reading Group Guide with photographs, maps, recipes, Q&As, and links to further reading,

Thanks so much for having me here to talk about Band of Sisters and the remarkable women of the Smith College Relief Unit!