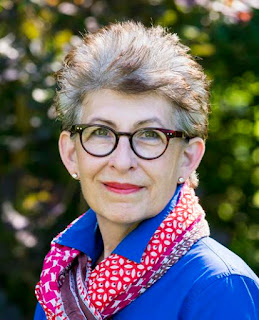 Marlene Trestman is the author of the biography Fair Labor Lawyer: The Remarkable Life of New Deal Attorney and Supreme Court Advocate Bessie Margolin. An attorney, she lives in Baltimore.

Q: How did you first get to know Bessie Margolin, and at what point did you decide to write her biography?

A: Meeting Bessie Margolin takes me back to the fall of 1974, my freshman year at Goucher College in Baltimore. My high school guidance counselor from Isidore Newman School in New Orleans, had written Margolin, a distinguished alumna from the class of 1925, a letter of introduction about me.

During my first month at Goucher, Margolin, who two years earlier had retired as Associate Solicitor of Labor, graciously invited me to spend a weekend with her in Washington, D.C. That visit sparked a relationship that lasted throughout my time in college, law school, and into my own legal career.

She was the first female lawyer (and the most worldly and elegant woman) I had ever met, and we were connected by common childhood experiences. Bessie and I were wards of the same welfare agency which educated both of us at Newman School — a half century apart.

Orphaned at age 11, my care was entrusted to the Jewish Children’s Regional Service, which oversaw my foster care. Only two decades earlier, the same agency ran the orphanage in which I surely would have lived - just like Bessie Margolin - had it not closed.

Q: What do Margolin's experiences say about the role of women in the legal field at the time?

A: Bessie Margolin, who was born a decade before women could vote and who had no female lawyer as a role model when she was little, simply defied the gender norms of her time. 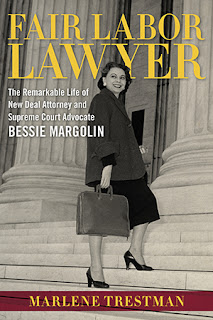 When she audaciously decided to enter Tulane law school in 1927, something no other girl from the Jewish Orphans’ Home had ever done, she was the only woman in her class. She was the first woman to receive Yale’s Sterling Fellowship, which she used to obtain her doctorate in law. And yet, the best offer she received from private law firms was to work in one's library.

She started her legal career in the 1930s when only 2 percent of the nation’s lawyers were women. She was the only woman on the brilliant legal team that defended FDR’s New Deal, and she got that job only after her male Yale mentor assured the Tennessee Valley Authority that she was intent on a legal career “as a primary objective from which she would not be deflected by consideration of marriage."

She thus began her federal government career with a pledge that she would be married to her job instead of a man.  When she argued for the first time at the United States Supreme Court in 1945 (when Sandra Day and Ruth Bader were young teens), only 24 women had argued there before her.

We know how Bessie would have answered this question.

In 1938 she shared her thoughts in her college sorority’s magazine. "Law is still too greatly restricted for women with considerable prejudice against them," she wrote, and offered this no-nonsense advice: "A woman attorney must manage to be accepted and treated as another man and must be willing to take responsibility, criticism, and hard work in the same spirit as do the men attorneys.  She must aim to become one of the men without, however, becoming masculine or overly aggressive in her approach."

Bessie practiced what she preached throughout her career.

A: Because the goal of my book was to write an overlooked woman back into history, my research largely consisted of finding her needles in famous people’s archival haystacks.

At the Library of Congress, in the papers of Associate Justice William O. Douglas, for example, who was Bessie’s thesis advisor at Yale and before whom she appeared for all 24 of her arguments, there was no file labeled “Bessie Margolin.” Instead, I found pieces of her important story buried in folders labeled “Correspondence - M.”

Bessie’s own papers, lovingly preserved by her nephew, largely were a hodgepodge of work files and her impressive legal briefs, leaving this biographer to scour archives across the country, and interview every person I could find who really knew her.

The surprise came, after I completed the first draft of the manuscript, when Bessie’s nephew located one more small bundle of letters and photos in the back of his ex-wife’s garage.

This was what I had been hoping for. These personal letters — some signed with only nicknames, others with return addresses torn away, to obscure the sender — finally gave me the insight to put heart and soul into her biography.

Q: What do you see as Margolin's legacy today, and what do you hope readers take away from the book?

A: Bessie, and a few other pioneering female Supreme Court advocates, opened courtroom doors for countless women and paved the way for the appointment of women justices.

Bessie also personally mentored and championed the careers of many other women and men, lawyers and support staff. She groomed one brilliant lawyer to become to the first female Solicitor of Labor, and she certainly influenced my career.

But the lessons she teaches us are even broader.

First, women and minorities need champions — more than mentors — who will stick out their necks to provide jobs, peach assignments, and other career advancing opportunities.

Bessie was fortunate to have those champions in her life, such as Solicitor General Charles Fahy who assigned Bessie her first Supreme Court argument. And we all need to be champions for other people as well, as she was.

Second, having served in non-political positions in government throughout her remarkable career, Bessie reminds us of the dignity and power of public service, especially now when confidence in our public institutions have been badly battered.

Finally, as a founder of NOW and the nation’s top fighter for equal pay for women, despite naively describing herself as a “reluctant feminist,” Bessie Margolin reminds us that we can all change history; we just have to be prepared, show up, and speak up.

A: I am currently finishing the manuscript for my second book, Most Fortunate Unfortunates: New Orleans’s Jewish Orphans’ Home, 1855-1946, under contract with LSU Press.

While researching Bessie’s childhood in the orphanage, I was intrigued by the institution where she grew up and where I would have lived had it not closed. After writing Bessie Margolin back into history, telling the Home’s story is the second (and last!) book I feel obligated - and uniquely qualified - to write.

A: Of all the generous reviews written about Fair Labor Lawyer, none pleases me more than the unpublished and handwritten note I received from the late Justice Ginsburg: “As daunting as the undertaking must have been, you have accomplished an important mission in bringing the work and days of a remarkable woman vividly to light. Although Bessie’s path and mine never crossed, I had heard much about her. Thank you for enabling me and legions of other lawyers to appreciate what a front runner she was. Cheers. Ruth Bader Ginsburg.”

--Interview with Deborah Kalb. Marlene Trestman will be participating in a discussion at the Bender JCC of Greater Washington on March 8.