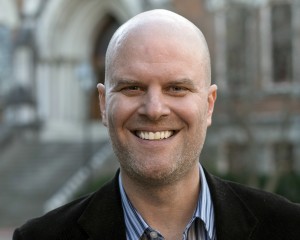 Andrew Maraniss is the author of the new young adult book Singled Out: The True Story of Glenn Burke, the First Openly Gay MLB Player and Inventor of the High Five. His other books include Strong Inside. He is a visiting author at the Vanderbilt University Athletic Department.

Q: You note that your agent suggested Glenn Burke as the subject of your new book. What intrigued you about him and his life story?

A: My niche is writing sports-related narrative nonfiction with a social justice bent for teens and adults.

My first book, Strong Inside, was a biography of Perry Wallace, the first Black basketball player in the Southeastern Conference. That book is as much about the civil rights movement, racism and the physical and mental toll of pioneering as it is about basketball.

My second book, Games of Deception, is the story of the first U.S. Olympic basketball team at the 1936 Olympics in Nazi Germany. It’s as much about fascism, antisemitism, and propaganda as it is about basketball.

With this biography of Glenn Burke, I knew that I’d have a chance to write about my favorite sport, baseball, in a decade from my childhood when I first became a fan, the 1970s, while placing the story in the context of the gay rights movement of the ‘70s.

That was apparent from the moment Alec brought up Glenn’s name, so I knew right away I wanted to write this book.

A: I went into this project knowing very little about Glenn Burke other than he was the first openly gay Major League player and inventor of the high-five.

I knew nothing beneath the surface, so everything I discovered during the research for the book was a surprise. 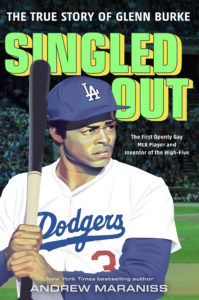 He sang on a live folk album as a kid. He was one of the first professional baseball players also to play college basketball at the same time. He was the first Major League player to wear Nikes in a game. He was close friends with a Levi Strauss heir.

He was a star player on the gay softball circuit after his professional days, and won gold medals in the first two Gay Games. He experienced homelessness, served time in San Quentin, was hit by a car and badly injured. I knew none of this.

I researched this book by interviewing family members, high school classmates, Minor League and Major league teammates, sportswriters, friends from the Castro in San Francisco, social workers and doctors who served people with HIV, even a frozen malt salesman at Dodger Stadium who went on to become one of the top executives at Nike.

I read old newspaper articles, books about the Dodgers and baseball in general in the 1970s, and educated myself on the gay rights movement of the 70s, the backlash to that movement, and the onset of HIV.

Q: What do you see looking ahead for gay players in major league sports?

A: We’ve already seen a lot of progress in women’s sports, where lesbian athletes have come out and are visible, powerful forces in their leagues and in social justice movements.

Progress has been slower in men’s sports, at least in terms of gay athletes coming out while they are in the prime of their careers. As he was dying in 1995, Glenn Burke said that he hoped that his experience would open doors and make things easier for gay athletes of another generation. We really haven’t seen many men walk through those doors.

On the one hand, it’s not hard to understand why. While there has been great progress on LGBTQ rights since Glenn’s time, we still see tremendous homophobia in some segments of society, with anti-gay legislation pushed by conservative politicians at every level of government. Transgender athletes are subject to particular persecution.

It’s not exactly an apples-to-apples comparison, but you can look at the vitriol directed at Colin Kaepernick and other athletes at the high school, college and professional levels to see that athletes who take a stand on social issues risk harassment from bigots at a minimum and possibly the loss of their career.

Pro athletes only have a short window to live out their dreams and make a lot of money. Is coming out while they’re still playing worth it given the risks?

All that said, I don’t think there is the same level of homophobia in most pro locker rooms than there has been in the past, just based on the way many athletes have reacted to recent homophobic comments and incidents.

The quick condemnation of Reds’ broadcaster Thom Brennaman’s homophobic remarks by many MLB players was a great example.

A: His legacy is alive all over the world whenever anyone celebrates the success of another person by offering a high five. That’s a pretty incredible legacy when you stop and think about it. Who wouldn’t want to be remembered for something associated with pure joy?

On the other extreme, we can look at the way Glenn was run out of baseball and the downward spiral that ensued to see the terrible effects of homophobia, the way it can destroy lives and the damage it does to society when people aren’t permitted to share their gifts.

Sports are supposed to represent a meritocracy. When we see that myth busted, it exposes injustice in a powerful way. That’s why I think sports books work so well in combination with social justice themes.

A: I’ve just completed my research for a book on the first U.S. women’s Olympic basketball team, which played at the 1976 Olympics in Montreal. Their story is set in the context of the women’s rights movement of the ‘70s and will come out in late 2022 to commemorate the 50th anniversary of Title IX.

A: If any of your readers would like to read Singled Out as part of a book club, I would be happy to join them via Zoom after they’ve read the book to answer their questions. I also enjoy speaking with students in middle schools, high schools and colleges.

Also, if people are interested in following news related to sports and society, I can add them to our e-newsletter distribution at the Vanderbilt Sports & Society Initiative, my “day job” when I’m not working on my books. People can find me on Twitter @trublu24 or email me at andrewmaraniss@gmail.com.