Leah Simpson is the executive director of CANDLES, a nonprofit organization and museum founded by Eva Mozes Kor (1934-2019), a survivor of the Holocaust and Josef Mengele's experiments on twins. Kor's book The Power of Forgiveness was just published posthumously.

Q: How did you and Eva Kor end up working together?

A: I am a teacher who has taught about the Holocaust. I was able to travel to authentic sites. I became the deputy director of CANDLES in Terre Haute, and have since moved into the executive director role.

I started in September 2017 and she died in July 2019. For almost two years, we traveled together. One of the staff members always traveled with her.

Q: What inspired her to write the book, and did you work with her on it?

A: I didn’t work with her on the book. She worked on it before I worked here. We worked on a new forgiveness book before she died.

Forgiveness was important to who she was. She lost her family by the time she was 10. Fifty years later, she happened on the idea of forgiveness. She had tried many other things. Forgiveness worked. She felt it was okay to be happy.

Because it worked for her after surviving atrocity, she wanted others to have the same opportunity. She was always motivated to discuss it. The lessons were never give up, be kind, forgive your worst enemy and it will set you free.

Q: What do you think made her willing to forgive those who had tortured her during the Holocaust? How was her willingness to forgive seen by other survivors?

A: She was really angry [before], and in the time after she’d forgiven, there was a visible difference. If you see photographs of her face, it softened. She could be a comedian—she was free to be silly.

I didn’t know her pre-forgiveness, but it was a huge change. She got to be who she wanted to be. This was a vehicle that worked. 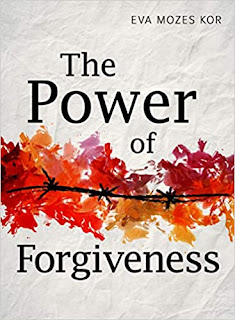 It was a real shock to other Holocaust survivors that she chose to forgive. It wasn’t well-received: “How dare you forgive?” She made it clear it was in her name only. She felt very strongly about it so continued on.

Some survivors’ children are much more receptive and feel they don’t want to carry the weight. A few Holocaust survivors embrace the idea, but many do not.

A: A couple of things. When you’ve been hurt, whether because you’re a victim of the Holocaust, or of abuse, or other things, you tend to be angry at the universe. It’s an option to forgive: I don’t have to carry this weight forever.

A: A lot of things are happening at the museum. Unfortunately, Covid happened. Typically, we take a trip to Poland every summer. It’s a powerful, life-changing trip. We have put in place an audio tour through Auschwitz. We have Eva’s voice, but it is through an app.

We are ready to go, but the world is not ready for us to travel, and the Summer 2021 trip was cancelled again. We’re looking forward to 2022.

In the museum, we have two new exhibits. There’s a Mengele twin exhibit, which uses twin survivor testimony. People can pick a twin and learn about a topic. And you can compare between different stories. Eva’s is just one story.

A: This history, even though it’s 75 years old, is still relevant. You can learn about forgiveness, about history, and be empowered to make changes in your world.