Lauren Francis-Sharma is the author of the new novel Book of the Little Axe. She also has written the novel 'Til the Well Runs Dry. She is the assistant director of the Bread Loaf Writers' Conference and the owner of the DC Writers' Room, and she lives near Washington, D.C.

Q: You note that Willie Nelson’s music played a role in creating this novel. How did your character Rosa emerge?

A: I was waiting in the carpool line at my kids’ school listening to Terry Gross interview Willie Nelson. Nelson was to be awarded the George Gershwin Prize for popular songs and Fresh Air was broadcasting old clips of previous interviews.

Like a lot of children of West Indians, I was forced to listen to country-western music while growing up. Alongside Aretha and Dionne, we listened to Hank and Patsy, so that day in the car, I didn’t turn off the radio when Terry Gross urged Willie to sing another song. I love Willie and I find his wavering voice and the way he strums his guitar, so beautiful.

Listening to him made me think back to the Westerns I’d watched with my parents. And it was then that this story arrived. It was as close to magic as I’ve ever been. 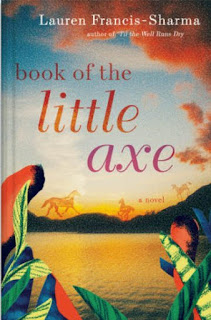 Q: The novel takes place in various locations and time periods, and includes historical figures. Did you need to do much research to write the book, and if so, did you learn anything that especially surprised you?

A: Yes, there are two historical figures in the story—Edward Rose and David Thompson.

Rose, an important character in the book, was a black man who was also a member of the Crow Native American tribe. He was a guide to many of our most revered American explorers, though Rose has largely been forgotten.

Thompson, who plays a minor role in the story, is very well-known for his explorations, particularly in the west. His “diary,” which are his field notes, helped me find my geographical footing while writing this story.

The journey to completing this book was filled with learning opportunities! Though I’d studied the triangular trade, following the money and the bodies in a really methodical way between Europe, Africa, the Caribbean, and the Americas brought me so much more clarity. I’m not a historian, but I hope people read this book and want to do their own learning.

Q: How important is setting to you in your work?

A: Even if I am sketching characters in my mind, I can never begin to write until I know the land where those characters sleep at night. I write what I see. My goal is to make every scene vivid, without belaboring the point. 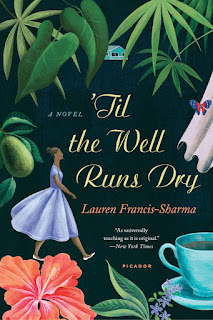 Even if I don’t write everything, I need to see what’s in each room, the fabrication of the floors, I need know what kind of grasses, flowers and trees exist there. Setting is vital to me.

A: Oh, this is always a hard question because what I really want is for people to love this story as much as I do.

I want them to read a few chapters and close their eyes, and be able to see Rosa and Victor in Montana and the younger Rosa in Trinidad riding horses.

I want them to understand the sacrifices that some people have to make in the name of love, I want them to see our earth in its most pristine condition, and I want them to think of how much capacity a four-letter word like “home” really has.

A: I’m working on a novel set in Baltimore in the early part of the 20th century.

A: It’s a challenging time, and for some it’s downright tragic and heartbreaking. But if you’re at home and healthy, and you have financial and food security and you’re able to support your local bookstores and local writers, please do.