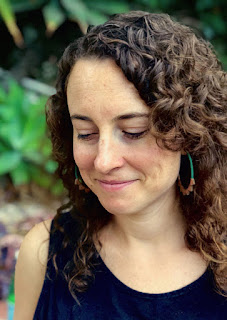 Amy Meyerson is the author of the new novel The Imperfects. She also has written the novel The Bookshop of Yesterdays. She teaches in the University of Southern California's writing department, and she lives in Los Angeles.

Q: You note that the idea for The Imperfects began with a diamond. Can you say more about how that grew into the book you ended up writing?

A: I love gemstones. In a past life, before I had a baby and a writing career, I used to make jewelry. I mostly worked in silver and semi-precious stones, but in order to fabricate jewelry, I had to learn about metal alloys and gemology.

In the process, I became kind of obsessed with famous jewelry. When I saw the Hope Diamond, the British Crown Jewels, the Romanovs’ Faberge Eggs, I found myself wondering about the lives the stones led before they were protected behind glass and what might happen if someone successfully stole any of these priceless treasures.

As with my other book ideas, I let this simmer for years before I decided I was ready to commit to the project. I began by doing a little preliminary research on famous missing diamonds and stumbled upon the Florentine Diamond. I’d never heard of the Florentine Diamond even though, at 137-carats, it was the fifth largest yellow diamond in the world and had been missing since the fall of the Austrian Empire in 1918.

What surprised me more was that when I started talking to gemologists and jewelry experts, they had only vaguely heard of the diamond themselves. This told me I’d stumbled upon something pretty special. I kept thinking about what might happen if the diamond resurfaced. Surely, the Austrian government would want it back. Other parties would try to claim it, too.

Then, I started to imagine what would happen if the diamond resurfaced not through some crime syndicate or jewelry heist but in the estate of an everyday person. This led me to the Millers, the flawed family at the center of The Imperfects. From there, the pieces of their story and the Florentine Diamond’s started to come together.

Q: The book covers many decades of history--how did you conduct your research, and did you learn anything especially surprising?

A: Researching is one of my favorite parts of the writing process because I always learn so many details that are not only surprising but that inform my story. When I started this project, I didn’t know anything about the Florentine Diamond or grading diamonds or the Austrian Empire or cultural heritage law. In fact, I didn’t even know I was writing on any of these topics until I started digging into the history. 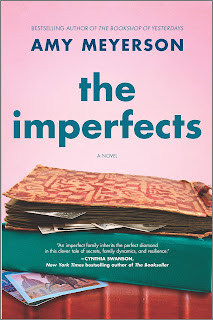 For me, there are five stages of researching a book. First, I read just enough to realize how much I still need to learn on a topic. Then, I talk to experts. Then, based on their insights, I read some more. This second round of reading is usually more focused and academic. Then, I talk to the experts again, sometimes the same folks but more often new ones. Then, once I’ve drafted the book, I reach out to my contacts a final time to confirm some of the details I’ve included, fully expecting them to politely remind me that they have other obligations besides my book.

At every stage, the generosity of these strangers has astounded me. For The Imperfects, I spoke to an art lawyer, a former FBI agent, a federal prosecutor, several gemologists, the palace historian at Schönbrunn Palace, and a consultant at Sotheby’s. I couldn’t have included half the details in the book without them.

In response, I wouldn’t know where to begin in terms of the countless surprising details I discovered.

So, I’ll share something I learned that informed the title of the novel: diamonds are identified by their imperfections. If you had two D Color, which means they have no color and are essentially perfect, diamonds with the same cut, you wouldn’t be able to tell them apart. Few diamonds, however, are flawless. They can be cloudy or have various types of inclusions like cavities and feathers.

I’ve heard these inclusions described as a diamond’s birthmarks, which is a nice way of thinking about them. These “birthmarks” make a diamond distinct.

Nowadays, when diamonds are certified, they are engraved with a serial number, so they can be traced. If diamonds are older, the only way to identify them is through their unique imperfections. When a gemologist told me that, I knew it was a perfect analogy for a family.

Q: Did you know the novel's ending before you started writing, or did you make many changes along the way?

A: I learned a lot about plot from my first novel, The Bookshop of Yesterdays. While I had a strong conceit for the novel, my debut took me over six years to write because I didn’t know what I wanted to have happen in the story. I kept changing the central narrative, and when you shift one element of a story, you have to go back through and rework the others. Hence the six years.

So, once I was finished with that novel, I promised myself that I wouldn’t write another book without having a general sense of the story before I began.

With The Imperfects, I actually knew right away what I wanted to have happen at the end, I just wasn’t sure how to get there.

As I mentioned, this book involved a considerable amount of research, but research offers a writer more than background information. Research is the story. 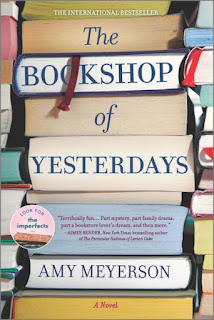 The central puzzle in the novel centers on how a 92-year-old Austrian immigrant secretly possessed the Florentine Diamond, a 137-carat yellow diamond that has been missing since 1918. By following the story of the diamond until it disappeared then following other threads of history, I was able to come up with a plausible life for the stone.

I won’t spoil the surprises in the book, but none of that could have happened without my extensive research. The same is true of other elements of the novel–research is a powerful creative tool. It can lead you to lots of unexpected places.

A: When I sat down to write The Imperfects, I wanted to see if I could tell a story about the past based on the documents and artifacts left behind. To me this was not only an intriguing challenge as a writer but also an essential question about history: what can we uncover about histories left untold?

In the novel, one of the secondary characters says, “If we don’t tell stories, they disappear.” I think about this a lot. My grandparents didn’t tell me much about their lives (and if I’m being honest, I didn’t really think to ask). Now that they’re gone, there are so many stories I will never know.

While I doubt most readers will find a priceless gemstone among their family’s belongings, I do hope that the novel inspires readers to investigate their family heirlooms and family histories.

A: I just started researching a new novel about a family-run vineyard in Santa Barbara wine country that survived Prohibition to become one of the most successful wineries of the Central Coast (in real life, some of the vineyards in Sonoma and Napa stayed open during Prohibition but the ones in Southern California all shut down or converted to other crops).

I’m still in the early stages of reading and discovery. The pieces of the story are starting to take shape, but I can’t wait until I can travel again and start talking to winemakers and historians. That’s always the best part of research–talking to folks about their passions. And, it doesn’t hurt that I’ll get to taste a little wine along the way.

A: I’m big on forgiveness in my novels. I’m really drawn to the healing power of literature, both for characters and readers. Although there’s tragedy at the center of The Imperfects, as well as several heated arguments, the novel is ultimately about acceptance and how learning about the past can provide for a better future.

While it’s an unprecedented time to be promoting a book, I do think The Imperfects can provide a bit of an escape, if that’s what you’re looking for in a novel right now. Either way, I hope you’re staying safe and reading something good.