Tim McGrath is the author of the new book James Monroe: A Life. His other books include Give Me a Fast Ship: The Continental Navy and America's Revolution at Sea. He's based in the Philadelphia area.

Q: Why did you decide to focus on James Monroe in your new biography?

I brought up General George Marshall (a hero of my dad) and Brent was already at work on one…he suggested Truman (another family hero) and after I blanched about following that McCullough fella, I thought a 400-page book might be worthwhile. The next day, Brent told me a Truman expert/professor was doing one.

When he suggested another president, I immediately said “Monroe”…he was my favorites as a young boy, having read about his being wounded at Trenton and being at Valley Forge.

As an old history major, I had some knowledge of his role in our early history, but when I got into the research I was flabbergasted at the depth, length, and accomplishments of his career. 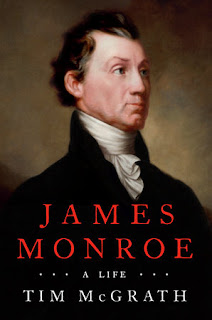 Add to that his remarkable wife (the Jacqueline Kennedy of  her time), and his grappling with his complicity in slavery (he was governor during Gabriel’s Rebellion, among other events) and it became easy to get enmeshed in his story. I could be typing this answer for years…

Q: You begin the book with a description of Monroe's role as the British were burning Washington, D.C., in 1814. Why did you choose to start there?

A: To be honest, we were looking for a pivotal event that best showed Monroe’s innate willingness to serve his country, and this one came to the fore.

It’s hard to imagine how…bleak, disheartening, and embarrassing it must have been to watch the capital city in British hands and government buildings torched, and here’s this 56-year-old guy, exhausted from leading a scouting party for days on end, willing to assume leadership of the War Department as well as State, and do his utmost to turn the tide. It’s Churchillian.

Q: The book includes so many fascinating details about Monroe's life--how did you research it, and did you learn anything that especially surprised you? There’s a hard question to provide a short answer to!

A: The research was ably helped, as always, by the experts, several of whom have assisted with all three books.

Then, there are the Monroe experts in Virginia, at his museum, at his Highland estate in Charlottesville, and publishing his papers at Mary Washington University – all of them have been wonderfully generous with their time, expertise, and navigational skills, keeping me on course. 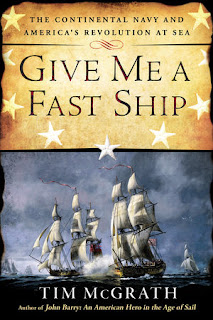 Re surprises – I knew he almost fought a duel with Hamilton and that Burr, as Monroe’s second, pretty much stopped it from happening…there’s some remarkable stories throughout Monroe’s life, but my favorite is definitely his wife, in her 20s, taking a solo carriage ride through the streets of Paris to the makeshift prison where Mme. Lafayette is waiting to be executed, and setting in motion her release.

Q: What do you imagine Monroe would think about today's politics?

A: He’d be really disappointed. He was such a partisan during his career (he’d be a regular on MSNBC or Fox, depending on the issue), but he matured so greatly over the years just before his residency that he adopted his old hero Washington’s approach to leadership. He got closer to ending party politics than most, if not all, his successors.

And he would be vitriolic about the current administration’s handling of the pandemic – or anything else, for that matter. Monroe was a consensus builder and, while he was rarely the brightest guy in the room (when your best friends are Jefferson and Madison, that’s a challenge), but he was renowned for his good judgment and wisdom.

A: Just beginning work on a book about Gettysburg – not a thorough narration of the battle (that’s been well done by so many better writers/historians than me!), but focusing on Lincoln, Lee, and Meade – the decisions each of them made, and the results of their decisions on the battlefield and afterwards. It will focus on the battle, its aftermath, and the cemetery dedication.

A: Nope – that should do it! Except I’m getting obsessed with asking people if they’re registered  to vote…every four years we hear that “this is the most important election” – and that’s true every time – but this might be the most important one in our collective memory.