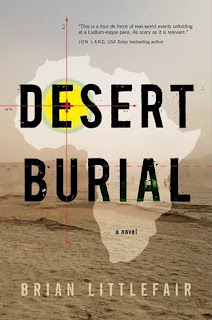 Brian Littlefair is the author of the new novel Desert Burial. He is a consultant who specializes in foreign direct investment.

Q: How did you come up with the idea for Desert Burial, and for your characters Ty and Lila?

A: The idea came from a few things I saw on my travels.

One was the World Bank's infamous "underpolluted countries memo." The idea was, Why not dump some toxic waste on these poor natives? Gives them kidney cancer, maybe, but they usually starve first. Give 'em a few bucks, it's win/win! It's undeniably logical, in a Modest Proposal sort of way.

So that gave the book its plot. Dumping everyone's waste in a sacrifice zone would be a big risky civil works project, the kind I worked on in my "economic hitman" days. Corporate predators would bid on it and sandbag each other in this vicious crooked free-for-all.

The real Lila was an aid worker in a Balkan war refugee camp. I changed everything except the haunted look in her eyes: overwhelming, terrifying responsibility for humans who have been disposed of, who weren't meant to be alive.

Q: How much did you rely on your own experience working in aid agencies and NGOs to write the novel?

A: The story's fiction. The atmosphere came from projects I worked on in national security or foreign investment, or volunteer work in food security, development, human rights.

I had the clearance Snowden had, and that's compartmented or fragmented with need-to-know so you figure things out in little unsettling glimpses, bit by bit. The way the book unfolds is how it comes to you as you learn what your government is up to.

Q: The Publishers Weekly review of the book says, "Industrial espionage, nuclear sabotage, and terrifying scenarios of ecological disaster are deftly mixed into a murky froth and cast a sharp light on Africa's bitter legacy of colonialism and Cold War–era manipulation, in which innocent civilians become pawns for ruthless locals and pitiless foreigners alike." What do you think of that assessment?

A: Now that the book is optioned for film we've had to think about what has changed since the first edition came out.

Back then I took Mali, one of the most vigorous democracies in Africa, and fictionalized it as this hellscape of foreign interference. That part’s not fiction any more. Nuclear waste is still piling up in situ because the Waste Isolation Pilot Project blew up a little, so we're OK there too.

Some things have changed quite a lot. A Russian agency's a bidder in the book. Back then Russia was prostrate. Now they've recovered enough to go into Syria and methodically squeeze out the CIA agents of Timber Sycamore. They're doing that in Africa too.

A: The fun subversive parts. Refugees and activists stop a CIA plan to make a killing dumping nuclear waste. Women in Africa build a community from nothing, by their own lights. Anarchists make fools of technocrats. It's not all lugubrious hand-wringing out there in the world. It doesn't have to be that way in books.

A: The history of U.S. human rights policy, which is essentially keeping human rights out of our reach. Doing human rights work in Africa I realized war-torn Africans have more rights than I do. So I looked into it and wrote it up at https://dissidentvoice.org/author/brianlittlefair/

A: No, I should probably shut up. I don't want to get you banned off Facebook.