Susan Allott is the author of the new novel The Silence. She lives in London.

Q: You write of your character Louisa, “I was trying to tell her story, which was close to my own, and found myself telling a different story in the process.” How did that process develop into this novel?

A: The Silence was inspired by my failure to immigrate to Australia in the '90s. I left and went back to London, full of regret for what I saw as my weak spirit. My overwhelming homesickness felt silly once I got home and I wondered what was wrong with me, that I hadn’t loved Sydney and enjoyed the adventure.

I found myself writing about Australia quite soon after I got back, and originally I thought the book was going to be about a British woman called Louisa who left Australia for England, as I had done. I surrounded her with characters who carried on their lives in Sydney after she left, and they started to take over a bit.

My early readers told me to ditch Louisa’s chapters in favor of those set in Australia, which were somehow more colorful and interesting. It took me a while to accept they were right.

Once I’d deleted Louisa’s chapters (which amounted to over 50 percent of the book) everything started to work. Although Louisa is still central to the book, she’s not the protagonist I once thought she would be. The Silence became a story about coming back to Australia, rather than leaving it.

Q: How did you research the novel, including the forced removals of Aboriginal children in the 20th century?

A: I researched as I wrote, especially during the early drafts while I was trying to decide where the heart of the story was. I went back to Australia a few times to visit my in-laws and I took lots of pictures while I was there and drank it all in. 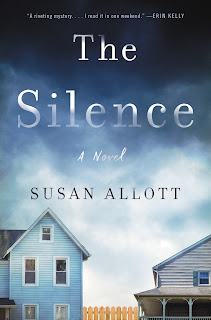 But most of my writing about Australia was done retrospectively, from memory, and I deliberately fictionalized Agnes Bay so that I wouldn’t need to describe my setting with total accuracy.

The most important source while writing The Silence was the National Library of Australia’s oral history project, where Aboriginal people who were removed as kids, or whose family members were removed, talk about that experience. There are hundreds of recordings and I listened to some of them several times.

I also read and re-read the Bringing Them Home report, an inquiry into the child removals which was tabled by the Australian Federal Parliament in May 1997.

When the book was looking likely to be published I gave it to an Aboriginal man based in New South Wales who checked it over and gave it his approval. My publisher also arranged a sensitivity read during the final edit stage.

Although The Silence is a work of fiction, I feel a responsibility to the people who went through the events I’m describing, and I wanted to capture it all as truthfully as I could.

Q: The book jumps back and forth between 1997 and 1967. Did you write the novel in the order in which it appears, or did you focus more on one period before turning to the other one?

A: I wrote the 1967 chapters first. For a long time it just wasn’t working as a novel; it was well-written with great characters but it didn’t have enough jeopardy.

It was only when I deleted all of the chapters written from Louisa’s point of view that I realized I needed another timeline; it opened the whole book up and helped me to see what I had to do.

The 1967 story was well developed by then, it had been through a few rounds of edits, and I knew those characters well. So I slotted the 1997 chapters around them, and it gave the novel so much more depth and mystery.

I loved writing Isla as an adult, because I knew her so well as a child. I knew her parents and I knew about all the formative things that had happened to her.

A: The Silence is intended to entertain above all else, but I hope it does make people think too, and I hope it prompts certain questions in the reader and gets people talking.

The question of how we deal with our mistakes is one that interested me as I was writing.

The characters in The Silence are all flawed to various degrees (as we all are) and all of them deal with their regrets in different ways. Some turn to alcohol, some find other ways to suppress and forget what they’ve done, some eventually face up to and take responsibility for their mistakes.

There’s also a deliberate emphasis on the word “sorry” in the book, with some characters withholding the word and others using it with varying degrees of impact.

I don’t want to dictate what the reader might make of that, but it’s something I hope they might think about.

A: I’m working on a spooky mystery set in my part of South London, where the new inhabitants of a Victorian house have to stop history from repeating before it’s too late.

It will have characters you can root for and an atmospheric setting, with a dual timeline showing how dramatically the fortunes of a house and its inhabitants can change over time.

A: I wrote The Silence over the course of about seven years while I was working part time and bringing up young children. Initially I wrote it for myself, just to see if I could do it, and then I started taking it more seriously, doing creative writing courses and retreats, and looking into how to get an agent.

The support and encouragement from other writers has been the thing that carried me through when I wondered if I should give up.

I hope any aspiring writers reading this might be encouraged to hear that I went through long stretches of despair with this book, as all writers do. It was really not very good for a while! All good books are rubbish before they are good. Hard work is the thing that gets you there in the end.