John Balaban is the author of the poetry collection Empires. His many other books include Coming Down Again and Path, Crooked Path. He writes poetry, fiction, and nonfiction, and also translates Vietnamese poetry.

Q: Over how long a period did you write the poems in Empires, and how did you decide on the order in which the poems would appear?

A: The topic has been with me a long time. I was a college student majoring in the classics and reading Spengler's Decline of the West when my first poem was published. That poem was about ancient Troy and its archaeological strata, at "Hissarlik " in Turkey.

So, a life-long interest, but Empires itself was a 10-year project which, as one reviewer wrote, "roams the globe—and the centuries."

The large topic made its order a challenge--how to move readers around in time and place as if they were really there. 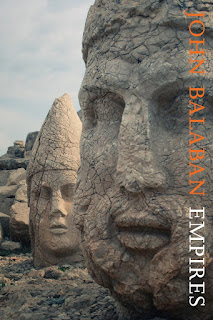 Ancient Ionia. Viking traders on the Volga. Spanish herders abandoned to the Southwest's Llano Estacado. Christmas Eve by the Delaware, 1776. Anna Akhmatova waiting outside Lefortovo Prison. A Romanian Jew waiting for the Nazis to come for him in Paris. Our 9/11. Riding a train through Dixie after Obama's election.

A: I went through a number of titles based on poems in the book, some lyrically set in nature, like "Tide Pool;" others set in Spanish history like "Cibolero." The poem about Anna Akhmatova closes with "the end of the American century." Then I found the book's cover photo of the crumbling stone faces of Asiatic rulers of ancient kingdoms whose very names are lost to time.

Empires rise and fall. Ours as well. But in that rise and fall, along with the "haunting legacies" (to echo the title of a book of yours, Deborah), there abides an informing natural beauty as well as joy and love and friendship. 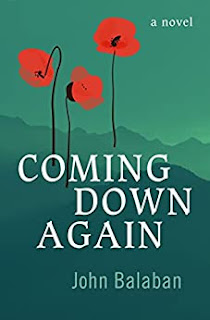 Q: In an article in the Los Angeles Review of Books focusing on your work, Aliki Barnstone and Tony Barnstone write, "In his new book, Empires, he once again demonstrates a piercing moral vision of humanity broken by colonialism and war and ethnic violence, yet he also offers possibilities for healing." What do you think of that assessment?

A: I especially like the last part of their sentence ..."offers possibilities for healing."  I'm not a polemicist.

A: Hope. Even in the peculiar times we live in. 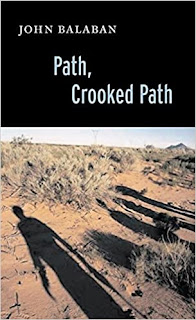 A: I published a memoir called Remembering Heaven's Face about my years in Vietnam where I volunteered to serve as a  civilian conscientious objector. For two years, I evacuated war-injured children as my "alternative service."  I'd like to pick up where that memoir left off.

Or, I might go back to finish a novel I started in Romania years ago, and almost finished when I got sick and had my life saved on a Sunday night in an emergency operation in a hospital in Transylvania, filled with bats.

A: A bat flew before me as they wheeled me into surgery. One was there in the morning, sitting on top of the open French window when I woke up at dawn.