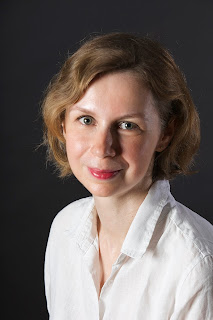 Katja Ivar is the author of the new mystery novel Deep as Death, the second in her Detective Hella Mauzer series, which began with Evil Things. Katja Ivar was born in Moscow, lived in Texas as a teenager, and now resides in Paris.

Q: This is the second in your Hella Mauzer mystery series. How did you come up with the idea for your character Hella, and for this installment in the series?

A: When I started writing my debut, Evil Things, the story lived in my mind long before I had my protagonist. And then one day, I had this image of a woman tramping alone through the snow to solve a crime no one cares about. She just sort of appeared on the page, stubborn as Hell, smart and misunderstood.

At the end of Evil Things, Hella's life is a despicable mess, and worst of all, she's been fired from the police squad. Several months later, as Deep as Death begins, Hella has succeeded in getting her life under control: she runs a small, barely profitable PI business, she's back with her boyfriend Steve.

And then a new client comes in, and suddenly, she is not sure of anything any longer.

Q: The novel takes place in Helsinki in 1953. How important is setting to you in your writing? 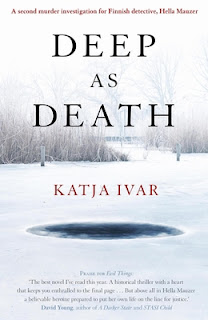 A: The story starts in February 1953, and this is not a coincidence. Even at the best of times, the month of February is dreary: the sun is low, bitter wind is blowing off the sea. Also, Helsinki is a lovely city, but in February, it is not at its best. I wanted the setting to contribute to the hostile environment that Hella has to face in her investigation.

And then there's the year - 1953. While writing the novel, I had a lot of fun weaving in historical facts big and small. Newspaper headlines feature Ethel and Julius Rosenberg’s campaign for clemency, and the denouement coincides with Joseph Stalin’s death on March 5, 1953.

Q: Can you say more about the research you did to write the book, and whether you learned anything that especially surprised you?

A: Just like for the first installment in the series, I did quite a bit of research because, obviously, I haven’t lived in the 1950s, and I wanted to get things right.

Luckily for me, the Police Museum in Tampere was a treasure trove of information, while the Helsinki City Museum exhibits include a reconstructed 1950s apartment, which gave me an idea as to how my character might have lived.

As to what surprised me the most... I'd say the introduction of roof signs on police cars. To me, it seemed such an obvious thing, but apparently, the decision to equip the police cars was not obvious at all (and Finnish police was the first in Europe to do that).

I have my characters argue about that, with some claiming that citizens risk to be scared by these innovations, and drive into ditches (by the way, the anecdotal evidence collected after the introduction of roof signs actually supports his point of view). 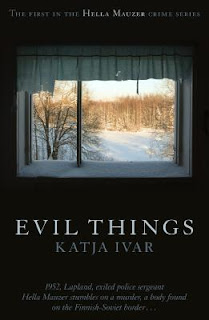 Q: Do you think Hella has changed from the first book to this one?

A: Hella is her own worst enemy. She has lots of stellar qualities: she is honest, and kind, and generous to a fault, but she is also socially awkward, and brusque.

At the end of Evil Things, she finally manages to make some friends who matter a lot to her. And in Deep as Death, I have her pitted against a most unlikely roommate: a pretty young wannabe detective, who sees herself as Hella's sidekick. Hella has no choice but to change at her contact.
Q: What are you working on now?

A: The new installment in the series - and contrary to the first two volumes, it takes place in the summer, during the polar day. I like the idea that when midnight sun shines, all shadows disappear and caution is thrown to the wind. But here’s the thing: bad people don’t necessarily wait until after dark. Daylight is no shield.

A: Being published is a dream come true for me - so I wanted to say huge thanks to my readers and to the kind book bloggers who spread the word.