Jill Wine-Banks is the author of the new book The Watergate Girl: My Fight for Truth and Justice Against a Criminal President. She was an assistant special prosecutor in the trial of President Richard Nixon's key aides during the Watergate scandal. She currently is a legal analyst for MSNBC, and she lives in Chicago.

Q: Why did you decide to write The Watergate Girl?

A: I thought about writing the story of Watergate and what it was like being the only woman on the Watergate Special Prosecutor’s trial team since right after the trial ended, but I was too busy with work to do it at the time.

Then, I retired and my story seemed not so relevant until Donald Trump was elected. His firing of Comey made comparisons to the Watergate scandal extremely significant and led to my becoming an MSNBC legal analyst with a platform to explain those parallels. That’s when I knew it was time to write The Watergate Girl.

Q: You write, "Today we are up against a deeper existential threat to democracy than we faced during Watergate..." Can you say more about the comparison between the two periods, and what you see looking ahead?

A: Although President Nixon was immoral and corrupt, ultimately he believed in the rule of law and political norms. When faced with a unanimous Supreme Court ruling, he obeyed. When faced with sure conviction, he resigned rather than put the country through a trial. 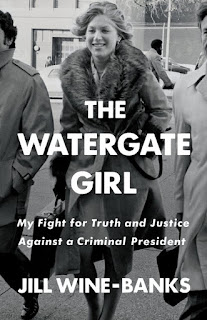 With President Trump, especially in an age lacking any shred of bipartisanship, he has refused to follow laws and norms and has gotten away with it.

More importantly, he is not just misusing the agencies of government as Nixon did, he has completely perverted them, particularly the Department of Justice and the courts, which have always been and must always be, independent but are not serving “We, the People” now.

I never feared the end of impartial justice, the free press, or free elections during Watergate. I do now.

A: The title captures the era better than any other could possibly have. It was the idea of Gioia Diliberto who worked with me to organize the 400-plus pages I had written and make them flow without any legalese or what she calls “throat clearing phrases.”

I hated it and said I would never allow the word “Girl” to be part of the title, but my fabulous editor at Holt, Paul Golob, asked a simple question that changed my mind: “What better represents the era of Watergate than the word girl?” He is right. Plus, he pointed out how many bestsellers have the word Girl in the title.

Q: Did you need to go back and do any research for the book, and if so, did you learn anything that surprised you?

A: I started with just my memory, then checked every detail, first with Google before going to do research at the National Archives and perusing other books written about the Watergate scandal and trial. After all that, I interviewed many of the participants.

One surprise was not being able to talk to any of Rose Mary Woods’ friends or colleagues from the White House. They all viewed me as her enemy and wouldn’t talk to me. That frustrated my desire to portray her as more than the loyal secretary who caused an 18 ½ minute gap in a subpoenaed White House tape recording.

As you know, she is a main character in The Watergate Girl and played a significant role in the Watergate cover-up. She was known as President Nixon’s loyal secretary, but she was much more than that. She was an advisor to him, Aunt Rose to his children, and, in today’s world, might have been his chief of staff.

My cross-examination of her was a turning point in public perception of the culpability of the president.

On NPR’s Fresh Air show, I expressed my disappointment at not having learned more about Miss Woods because, to my surprise, I came to respect and understand her through writing The Watergate Girl, and had the most wonderful reaction from one of her relatives, a grand-nephew, who called me and has willingly shared some wonderful memories of Rose that I hope to share with readers at some point.

A: I’m working on three things now: First, I’m trying to get the message out that The Watergate Girl is a good quick read during our time sheltering at home while we all try to survive the pandemic.

My editor describes the book as a combination of All The President’s Men and Hidden Figures. It combines battling scandal and sexism and winning and brings to life a time when the system worked and democracy prevailed, and, without mentioning Trump until the Epilogue, it shows how relevant the story is today.

Second, I was just elected as a Biden delegate and I am doing everything I can to help him win the nomination and then the presidency in November. I have seen Nixon and Trump hurt our country and know how much we need a man with Biden’s character and experience, especially now.

Third, many have asked me to write a coffee table book about the messages of #JillsPins that tell the story of the Trump administration and current culture. A Twitter follower suggested the perfect title for it.