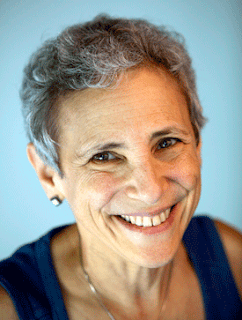 Gail Carson Levine is the author of A Ceiling Made of Eggshells, a new middle grade historical novel for kids. It takes place in 15th century Spain. Her many other books include Ella Enchanted and Ever. She lives in New York's Hudson Valley.

Q: You write that your father inspired your new book. How did you come up with your character Loma?

A: My only other historical novel, Dave at Night, which takes place in 1926, is loosely based on my father’s orphanage childhood, and an imagined version of him is the hero. (He had died by the time I wrote it.)

Family history on his side inspired A Ceiling Made of Eggshells, but I didn’t want to recreate him, because, naturally, I knew him too well, and his personality and outlook were irreversibly 20th century.

To create a 15th century character still seems impossible to me—the time gap is too great, but for this book I wanted a girl as a main character, and I wanted her at the very least not to be modern.

In Spain in the Middle Ages, Jewish girls stayed home. They cooked, spun, weaved, embroidered, took care of younger siblings, studied with older brothers (they were more often educated than Jewish girls in the rest of Europe), and married young, to a man chosen by their parents.

If not disrupted by external forces, one girl’s life was much like every other’s, and she had almost no agency beyond choosing the dinner menu when she was old enough. Alas, this would make for a dull book!

My first challenge was to give my girl, Loma, opportunities to take action and yet to still belong to her time.

Throughout the thousand-year history of the Jews in Spain before the expulsion, the Jews were (partially) protected by wealthy Jewish courtiers, who might also be physicians or financiers, who mediated between the Jewish communities and both the court and the Church.

By the late 15th century, when Jewish fortunes had waned, only a few courtiers remained. One such figure was the philosopher-financier Don Isaac Abravanel. I created a courtier, Don Joseph Cantela, who is loosely based on Abravanel.

In A Ceiling Made of Eggshells, Don Joseph becomes very attached to his granddaughter Loma after his beloved wife dies. He takes Loma with him on his diplomatic missions across Spain, which allows her to be present for some of the events that lead up to the expulsion.

Loma’s family permits this because Don Joseph is the patriarch, the source of their wealth, and they want him to be happy.

Using my required authorial cruelty, I made Don Joseph susceptible to spells, minor strokes in modern terms, which sometimes strike when no other adult is available, and Loma has to act and make decisions. 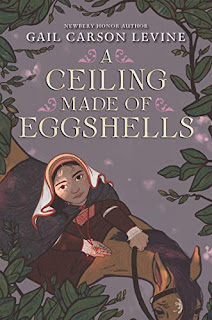 She’s a clever, shy girl, averse to conflict, who has no ambitions beyond the ordinary. Agency is thrust upon her. Gradually, she grows into it, but always reluctantly. She doesn’t take credit for what she accomplishes; instead, she attributes success to God or her dead grandmother.

Q: How much did you know about Sephardic history before writing this novel, and how much research did you need to do to write it?

A: I knew there had been an expulsion and that my ancestors on my father’s side had been among the expelled. I knew that my father’s first language as a very young child before he came to the States had been Spanish, even though the family had been out of Spain for over 400 years.

Some of my cousins made elaborate family trees going back as far as they could, but that wasn’t very far. I had a steep learning curve!

At first I didn’t even understand much of what I was reading.

For example, one of the first tomes I struggled through was Haim Beinart’s The Expulsion of the Jews from Spain, which I now recognize as a masterpiece.

Most of the book is taken up with financial accounts: how many houses were owned by the Jews of this town or that and the money collected from their sales; the debts a certain Jew owed to Christian creditors; the sums owed by Christians to a particular Jew and his attempts to collect.

Why, I wondered, is Beinart recounting this dull stuff when lives were falling apart?

Well, people didn’t write diaries back then. There were no newspapers. Much of the tragedy is locked up in these surviving accounts. 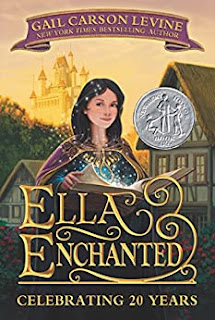 Jews were pressed to pay their debts promptly. If they failed, they might be in prison when the expulsion deadline passed. Then they’d have to choose between conversion and execution.

Meanwhile, Christian debtors delayed, knowing the Jews would soon be gone. A buyers’ market prevailed. Christians paid next to nothing for Jewish wealth. A vineyard, for example, might be exchanged for a handkerchief. Eventually, I got it.

I read and read. I continue to read, even though A Ceiling Made of Eggshells is long finished. The fascination remains. By now I have almost a bookcase full of books on Sephardic history and medieval Spain.

Not all the books are dry, either. Jane S. Gerber’s The Jews of Spain, A History of the Sephardic Experience is beautifully written for a general audience.

My cousin led me to a book of Sephardic recipes, A Drizzle of Honey, The Lives and Recipes of Spain’s Secret Jews, by David M. Gitlitz and Linda Kay Davidson, which are derived from the obsessively detailed records of—the Spanish Inquisition.

And I got my hands on one of the first books of fashion, Authentic Everyday Dress of the Renaissance, All 154 Plates from the “Trachtenbuch” by Christoph Weiditz—a little later than my period, but close enough, and most of the plates depict Spanish costumes.

I reached out to historians in the flesh as well and was delighted at the generous help I received. Jane S. Gerber, who is an emeritus professor at the City College of New York, became my mentor, guiding my reading and eventually reading and commenting on my manuscript. 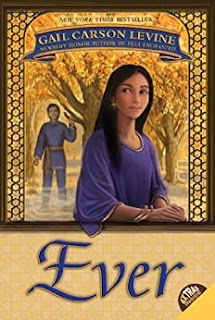 A: I came across this folklore about King Solomon, that he wanted to marry a young lady, but she wouldn’t accept his proposal unless he created for her an eggshell ceiling. The little fantasy stayed with me and I put it in the book.

When I was thinking about titles, I remembered it and proposed it to my editor, who loved it as long as I punched up the significance of the phrase in the manuscript, which I did by making the ceiling a metaphor for the beauty and fragility of the Jews in Spain. It is my favorite title of all my books.

There are mundane reasons I love it, too. Coming up with titles has sometimes made my head almost explode, with the publisher’s marketing people rejecting idea after idea. This one breezed through.

And since this is quite a different sort of book from my others, the title sets it apart. I’m happy about that, too.

A: The expulsion itself was just the beginning of the tragedy. So many Jews died during their flight. Few reached safety. The number of Sephardic Jews in the world plummeted. I’m lucky to be alive.

I came to imagine Loma as an ancestor of mine, my sister, and my cousins. She has the kind of grit that stood a chance of making it through. For all of us, Jewish or not, there were terrible times in our history, and there were people who were strong enough to prevail. That’s what I’d like readers to come away with.

And I’d like non-Jewish readers to learn that Jewish history isn’t limited to the events of the Holocaust.

A: I’m writing a semi-historical, semi-fantasy for kids about the Trojan War, which I’m turning into an adventure story rather than a tragedy. (Homer is spinning in his grave.) This one doesn’t have a title yet, and coming up with it may turn out to be another head-banger.

The first half of the book is told by the Trojan princess Cassandra, who has the gift of prophecy and the curse of never being believed.

The second half is told by Rin, an Amazon girl who makes bows for her clan of warrior women. These are Scythian bows, difficult and time-consuming to construct and the apex of technology at the time—way better than the bows of the Greeks.

In actual history or mythology (hard to be sure), 13 Amazons went to the aid of Troy near the end of the war. Rin will be among them, but I haven’t gotten there yet.

A: Thank you for asking!

Readers can visit my website, www.gailcarsonlevine.com. If they click on A Ceiling Made of Eggshells, they can read the complete bibliography for the book. Only a partial one is in print, because most of the tomes I list will be of little interest to a child reader—but the children and adults who are bitten by the history bug can find them there.

And readers can click on my Guestbook after they’ve read Ceiling and tell me what they think.