Ashley E. Sweeney is the author of the new novel Answer Creek. She also has written the novel Eliza Waite. A former journalist and educator, she lives in the Pacific Northwest and in Tucson, Arizona.

Q: How did you come up with the idea for Answer Creek, and for your character Ada Weeks?

A: Thanks for having me again, Deborah. As you might imagine, ideas are everywhere, and the answer to your question is no exception!

During my rollout for my debut novel, Eliza Waite, in 2016, my husband and I traveled to Alaska for a lengthy book tour. When all of the events wrapped up, we took a road trip to the funky little town of Talkeetna, Alaska.

On our way out of town, we came to a T in the road, right to Fairbanks and left back toward Anchorage. Not a few miles south of that stop sign, we crossed over a large creek.

In the rearview mirror, I caught the name: Answer Creek. I was so taken by the name, I told my husband at that moment that Answer Creek would be the name of my next novel, although at the time, I was rummaging around my brain for the next story.

Because I am dedicated (addicted, maybe) to telling untold stories of women who populated the American West, it didn’t take long to decide to do an Oregon Trail story. Of course, the most infamous narrative of the overland trail is the Donner Party.

I approached the project from a different perspective than other novelists; instead of a salacious retelling, I climbed inside a fictional young woman’s head and told the story from her perspective, considering the humanity of every individual on the journey.

By the way, the protagonist is based on a junior high school friend of mine, Ann Thomas Aylesworth, whose grit and guts inspired me as a 13-year-old, and still inspires me today. She would have been tough enough to survive the Donner Party ordeal; I certainly would not have survived. That is not said lightly; it is brutal self-honesty.

Although Answer Creek is a real river in Alaska, I placed it as a fictional tributary of the American River in central California. There are other, and deeper, reasons the name of the creek has meaning, but readers will have to read the novel to ferret them out. 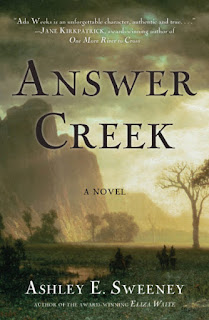 Q: The novel includes many historical figures. How did you research the novel, and did you learn anything especially surprising?

A: Two years of research resulted in more questions than answers, as is usual when mining history. But questions are a great motivator!

During the writing time, my research effort intensifies: visiting museums, scouring archives, doing interviews. Sometimes it’s a diversion down a proverbial rabbit hole, but I find the research fascinating, nonetheless. When you write about historical characters, you find that you “know” them. What I would do to have a conversation with James Frazier Reed or George Donner!

Yes, I learned many surprising facts in researching Answer Creek. One of the more mundane, but very interesting, details I learned was that all of the overland travelers walked (that’s more than 2,000 miles over five months). Only the elderly or infirm rode in wagons and teamsters drove teams by walking just to the left of their oxen, horses, or mules.

Q: How would you compare Ada with your character Eliza, the protagonist of your novel Eliza Waite?

A: Ada is 19, an orphan who has lost both her birth parents and adoptive parents. As she travels west with the Donner-Reed Party in 1846, she doesn’t know what lies ahead for her in California.

Eliza, in contrast, is a 29-year-old widow grieving the loss of her only son when she upends her life and strikes out on a new adventure. She has an inkling of what she’ll do once she arrives in Skagway, Alaska, although, too, her future is unknown. 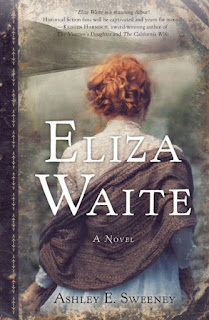 Ada and Eliza share some similarities; they are both physically plain and emotionally stoic in the face of adversity. They each face unimaginable sorrows and fight social station and injustice, although in different ways. I guess you can say they are both survivors.

Q: What do you hope readers take away from Answer Creek?

A: Surviving trauma in any form—abandonment, abuse, depression, starvation, crisis—is a long, hard climb on the part of the victim. Ada Weeks faces all these situations, and more. It’s often said it’s how we respond to crisis that shapes our character.

As an abuse survivor myself, I champion women (including fictional heroines) who rise above seemingly insurmountable challenges and forge new lives. Ada Weeks is such a character, and I cheer for her.

“The author is a master of vivid descriptions, dragging readers along every wretched mile of the trail, sharing every dashed hope and every dramatic confrontation, with Ada as their guide. Ada is a marvelous creation, twice orphaned and both hopeful and fearful about a new life in California, the promised land....A vivid westward migration tale with an arresting mixture of history and fiction.”
—Kirkus Reviews

A: I’m halfway through my third novel, a dual narrative set two centuries apart in Astoria, Oregon. Flora McTavish, a budding young Scottish botanical illustrator, is stripped from all she knows by her audacious uncle at the height of the fur-trading empire when he forces Flora to accompany him to the far reaches of the known world in 1814.

Flora’s counterpart, 21st century photographer Julie Goodenough, lives and works on the same plot of land in Astoria, Oregon 200 years later. The women are linked by far more than setting; they each grapple with making a name for themselves in male-dominated art worlds, dealing with sudden and mysterious deaths in their community, and navigating life as free-thinking modern women.

A: Since I interviewed with you four years ago, my first novel, Eliza Waite, won the prestigious Nancy Pearl Book Award and placed in four other literary contests. I spend my time equally between the Pacific Northwest and the Desert Southwest and enjoy gardening, art quilting, and traveling.

Thanks again for having me as a guest! I’m happy to offer one copy of Answer Creek to one of your readers.

--Interview with Deborah Kalb. Here's a previous Q&A with Ashley E. Sweeney. If you're interested in the copy of Answer Creek mentioned above, be the first to reply in the comments!