Natan Sharansky and Gil Troy are the authors of the new book Never Alone: Prison, Politics, and My People. Sharansky is an activist and politician who lives in Jerusalem. His other books include Fear No Evil and The Case for Democracy. Troy is a professor of history at McGill University in Montreal. His other books include Morning in America and Why Moderates Make the Best Presidents.

Q: Why did you decide to write Never Alone, and how did the two of you collaborate on the writing?

In fact, I noticed that these very different experiences gave me different angles on my life – and on our need to have strong identities and fight for freedom – so I decided to share some of these experiences.

Gil: I’m an American historian, I write about dead presidents – and I write alone. But, if the KGB couldn’t say “no” to Natan – how could I? Seriously, I was thrilled when he asked me to be his co-author, and it was a fascinating challenge to use his inspiring life story to advance a broader vision we both share of encouraging dialogue and fighting totalitarianism.

If you’re asking how did we actually work: Natan talked, I typed. I wrote it up – often working till 4 AM. He started editing at 5:30 AM – and we met at 10 to go over edits and start the cycle again. We went over every word, every phrase, again and again and again. We argued –lovingly -- about wording, tone, structure, logic – but we never had an ideological disagreement in three years.

Q: The book's introduction is titled "Living Life Backward." Can you say more about that idea?

Natan: Traditionally in life, everything is logically connected going forward. But life under dictatorship – and in prison – disrupts that easy flow.  So I had a circumcision at 26 – after I understood why we want to belong to the Jewish people; I got bar mitzvahed at 65 not 13 – after my voice changed and I was comfortable speaking in public; and I went to prison before entering politics.

Most important, my wife and I got married for one day – then separated for 12 years – and are now living happily ever after (the Soviets gave her an exit visa and not me, in one of their many manipulations).

Living life backwards – and in minus 12 -- especially when everyone else in the West is rushing thru life, helps keeps you a bit of an outsider, looking in – it also gives you some wisdom, making you really appreciate the good things we all have.

Gil: We actually signed a book contract for “999” and that’s the book structure – 9 years in Gulag, 9 years in Israeli politics, 9 years in the Jewish agency, working on identity-building projects. I hated the title! You can’t have a title that’s an inside joke, and I worried that our Evangelical friends would see 999, think 666, the devil, etc.

I was brainstorming with a friend in LA and told him that for years the KGB kept telling Natan, “you’re forgotten, you’re abandoned” – but he knew he was never alone – the Jewish people and the Free World were behind him.

“That’s it” my friend cried. “For 75 years we have been vowing ‘Never Again.’ Without forgetting the Holocaust, we also need an affirmative vision, ‘Never Alone’ – that when you are a part of the Jewish people, you are never a part, Never Alone…”

We had no idea two years ago, that it was such a perfect title for these Corona times – all of us understand that by being connected to something that gives us meaning, to communities, we are Never Alone! 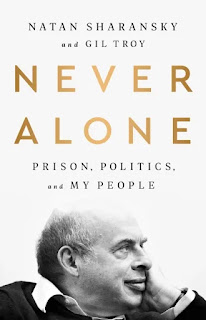 Q: You write, "More and more, I hear a question I’ve rarely heard before. Concerned Jews in Israel and the Diaspora are asking: Do we today share a common commitment to be one people, to continue our historic journey together?" What do you see looking ahead?

Natan and Gil: Jewish history teaches us to be optimists – but activist optimists, you don’t just wait for good things to happen, you actively work to make them happen.

So we raise these warnings about the differences in our community, understanding that if we diagnose the problems, recognize the dangers, understand that we nevertheless, despite our differences, want to stay together, we can work as hard as we need to, to ensure the optimistic outcome we have every right to expect.

Natan: I am doing what I have been doing for the last 50 years, pursuing the same agenda. I am fighting anti-Semitism in articles, lectures, and as the chair of ISGAP, the Institute for the Study of Global Antisemitism and Policy. I chair the Jewish Agency’s Shlichim Institute, sending young Israelis all over the world to build strong ties with the Jewish people.

And I chair the Babi Yar memorial initiative in Ukraine. Babi Yar is the Holocaust’s biggest mass grave – and it symbolized the Soviet effort to erase any memory of the Holocaust. So the fact that it will now be the biggest center for Holocaust studies, in the land where I was born, represents a real closing of the circle for me.

But the most important thing I do these days is work really, really hard every day, with my wife Avital to make sure that our family – including seven young grandchildren – is strengthened by this Corona challenge and not weakened or demoralized by it.

This summer, for example, we’ve been paying our grandkids two dollars/ten shekels an hour to teach us how to surf the internet. It’s humbling. We’re living out the Russian expression: “we are learning what they already forgot.”

Gil: I am working on a new book about American history – focusing on Franklin D. Roosevelt and his famous Four Freedoms Speech, championing Free Speech, Freedom of Worship, Freedom from Want and Freedom from Fear – everywhere in the world. Liberal nationalism at its most inspiring and most generous!

Natan: Although I confessed my optimism, I am shocked to see the growing totalitarianism in the West – the absolutism and intolerance no longer just festering on the far left and the far right but invading the mainstream, becoming normalized.

And to see that underlying much of it are rigid Marxist assumptions – only decades after the Soviet Union collapsed so spectacularly – is sobering, and a warning message we hope our readers from every part of the spectrum will take away with them: we don’t have to agree with one another but we should continue to believe in each other – and argue constructively with one another, that way, we’ll never be alone.