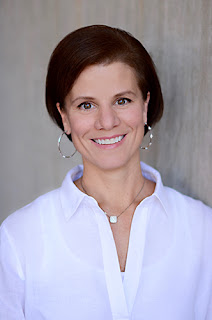 Jamie Beck is the author of the new novel Truth of the Matter. Her many other books include If You Must Know.

Q: Truth of the Matter is the second in your Potomac Point series, after If You Must Know. What do you see as the connections between the two novels?

A: The only true connection between the books in this series is the town and the secondary characters who live and work there. That said, although the books do stand on their own, all of them deal with familial themes and dysfunctional relationships, which is a link of a different sort.

Q: You tell the story from several characters' perspectives. Did you focus more on one character's point of view before turning to the others as you were writing?

A: I generally plot out each character’s arc and turning points in advance and then write them in the order they appear in the story. This one was a little harder because, while there are three distinct POVs, Anne’s dominates the story. 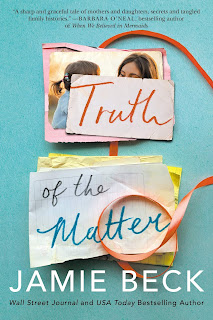 Q: Art plays a big role in the novel--what do you see as the importance of art in these characters' lives?

A: For both Anne and her daughter, Katy, art offers them a non-verbal way to express their feelings and fears. To explore who they are and what they want for themselves, and how they want the world to see them. It is their safe space, in a sense, where they can be quite vulnerable (which I think we all need in order to grow).

Q: The novel also focuses on mental health issues. What do you hope readers take away from that aspect of the book?

A: I think teen mental health is reaching crisis levels. The number of kids on medication for depression, anxiety, ADD, and more is climbing steadily.

Social media, the disconnect from extended families, the pressure put upon children to achieve “greatness” at younger and younger ages, and the lack of independence and freedom today’s kids have to make mistakes all contributes to this problem (in my opinion).

I hope Katy’s story helps some parents reevaluate how their own well-intentioned demands and parenting styles might be hurting their children more than helping them.

A: We are putting the final touches on For All She Knows, the final Potomac Point novel (which involves a teen drinking party gone awry). That comes out in late March. I’m also finishing my draft of The Happy Accidents (fall 2021), which involves three friends who must deal with the fallout when their “Say yes” adventure pact leads to trouble.

A: I really have enjoyed breaking away from the romance genre and wading into women’s fiction. I love focusing on issues and relationships that matter to women like me (mothers, wives, friends, daughters). I hope my former readers also enjoy the change, and that new readers are happy to “meet me” on the page.