Donna Miscolta is the author of the new story collection Living Color: Angie Rubio Stories. She also has written When the de la Cruz Family Danced and Hola and Goodbye. She lives in Seattle.

Q: You note that you wrote the stories in this collection over a period of 15 years. Did you write them in the order in which they appear in the book?

A: I did write the kindergarten piece first. It once had a life as an essay, but I realized I could have more fun with it as a piece of fiction. Kindergarten was a series of humiliations for me, which seems a sad way to start off in school. I thought it would be more freeing to project those humiliations onto someone else, someone fictional, yet real to me, which was how Angie Rubio came into being.

Once Angie was established in my mind and on the page as a character, I wanted to consider who she was several grades later in school, how she navigated the daily small and large insults directed at her merely for the effrontery of being brown.

I wrote about the slumber party she attended in late elementary school. Then I went back and filled in the years between the trials of kindergarten and the mortification of that slumber party. After that, it was pretty much chronological.

It was a pleasure but also a bit heartbreaking (a heartbreaking pleasure?) to move with Angie through the stages of her life, to watch her puzzle through and struggle against the othering of her that was a constant in her life, a part, however perversely, of the accepted order of things. 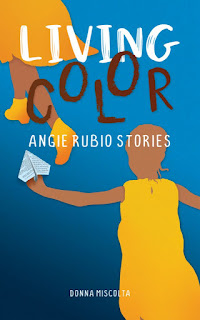 Q: How was the book's title, Living Color, chosen, and what does it signify for you?

A: For a long time, I was calling the book The Education of Angie Rubio, which seemed apt because each story is about a life lesson Angie learns as she progresses in school. I also liked the resonance of the title – the repetition of the vowels and the soft g sounds.

But titles containing “the education of” had been used already for a number of other books, so I just started calling my book Angie Rubio Stories, which, while to the point, lacked zing.

Jaded Ibis Press editor Elizabeth Earley suggested we use the title of one of the book’s stories, “Guided Tours in Living Color.” I love that title for that particular story, but I didn’t think it was representative of the whole book.

However, shortening it to Living Color and adding Angie Rubio Stories as a subtitle did work for me. The stories are about Angie and what it means for her to live her life as a person of color, or more precisely to grow up learning how to respond to those who see her as someone less than they because of her color.

Q: You've written stories and also a novel--do you prefer one form to the other?

A: When I was writing my first novel, that is, learning how to write it, I often took breaks away from it either because I was stuck, or I was suddenly inspired to write a story about something else. Writing a novel is a long, hard process. Writing a story can be long and hard, but still much shorter than writing a novel.

I’m working on another novel now and I’ve taken breaks from it to write essays, a form I’m interested in exploring more. So I think my preference has less to do with craft and more with my state of mind – whether I’m weary of the demands of the novel or stuck on where to go next with it.

I will say that I enjoy being immersed in a long-term project, but I also love the gratification of completing a story in a matter of weeks or months. But sometimes there is the confusion that happens when you think you’re writing stories and they turn into a novel or you think you’re writing a novel and all you really have are a bunch of stories.

And thus, I reveal my ineptness in distinguishing between writing the novel and the story.

Q: What do you hope readers take away from Living Color?

A: I want readers to enjoy Angie as a character. There is often humor in her predicaments and in her attempts to extricate herself from them. But at the heart of many of these situations is racism – not violent physical attacks, but subtle and not so subtle jabs of language that thwart Angie in her struggle to find herself and her place in the world. This is what I want readers to experience.

A: I’m working on two things as time and inclination allow. I have a draft of a novel done, and based on some valuable feedback I’ve received, I have more drafts ahead of me in terms of plot.

Ofelia and Norma are two characters from a story in my second book Hola and Goodbye. After their short career as high school wrestlers in the story, in the book they enter the social minefields of young adulthood. Issues of body image, sisterhood, and individual power are among the themes I explore through the lives of these characters.

I’ve also begun a nonfiction project. Having explored identity, belonging, and family dynamics in my fiction, I am compelled now to investigate the sources of my fiction in personal essays about place, childhood, and family.

My heritage is Filipino and Mexican. I’ve never been able to address this combination in my fiction, instead creating characters who are one or the other. Nonfiction allows me, in fact, requires me, to bring both sides into play.

A: I’m one of those fiction writers who draws from her own experiences when imagining a character. Except for the novel I’m currently working on, most of my fiction arises from something I’ve observed, lived, or learned from gossip or family lore.

While Angie Rubio and the situations she finds herself in are fictional, Living Color is by far the book that most closely parallels my life. It’s why this character is particularly dear to me. I think that many people will see themselves or a part of themselves. Or maybe they’ll see someone they know or wish they knew in this book.