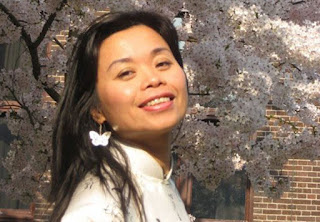 Nguyen Phan Que Mai is the author of the new novel The Mountains Sing. Her other books include The Secret of Hoa Sen. Born in Vietnam, she lives in Indonesia and Vietnam.

Q: How did you come up with the idea for The Mountains Sing?

A: Growing up in both North and South Vietnam, I witnessed the impact of historical events on the lives of our people, and saw how families were separated by those events. I witnessed the trauma that exists until today, so I was compelled to write about wars and conflicts to promote peace.

My idea was to use a family to represent our country, and for each member of that family to bear witness to a particular historical event.

I did a lot of research into the times of the French colonization, Japanese occupation, the land reform, the Vietnam War and the war’s aftermath… with the intention to fictionalize them into a novel.

It was my wish to write a large story, but I didn’t find a door into such a story until one day when I was traveling in a car with a Vietnamese friend. I asked him where he was during the war. 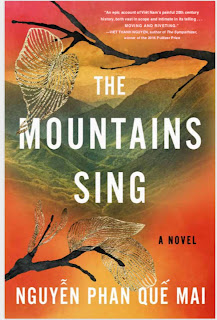 He told me when he was 12 years old, living in Hà Nội with his grandma (his parents were in Russia at that time), American bombers attacked the city. His bombing experiences were so horrific that more than 10 years later, he could not travel on an airplane.

His story moved me so much that I had to write about it. That night, after having cooked my children dinner and putting them to bed, I sat down at my writing desk. It was late and I Googled about the bombings of Hà Nội in 1972. With tears running down my face, I wrote 2.000 words, which would become the first scene of The Mountains Sing.

Q: Author Viet Thanh Nguyen, in an interview with NPR, called the book "in some ways...the Vietnamese version of The Grapes of Wrath." What do you think of that comparison?

A: Viet Thanh Nguyen is one of the most incredible literary champions out there; he spends a lot of his precious time on promoting the work of other writers and I really admire him for his generosity, as well as his unique talent as a writer and activist.

It is my great honor that he compared The Mountains Sing to The Grapes of Wrath. I deeply admire John Steinbeck’s work; The Grapes of Wrath enabled me to imagine vividly life in the U.S. for poor farmers during the Great Depression, and what those farmers had had to go through to be able to survive, build a future, and maintain their dignity.

There are themes in my novel that are similar to those of The Grapes of Wrath, and I hope that like John Steinbeck’s novel, The Mountains Sing is a pathway for readers to travel into a difficult and traumatic past and see history via the eyes of the people who experienced it.

A: Fiction is a window to history and through the eyes of fiction, history can become closer and more personal to the reader. The best historical fiction, for me, should provide historical insights and knowledge while motivating readers to reflect, make connections, enquire further, and even to take actions so that mistakes of the past won’t be repeated.

As I am a writer as well as a reader, I know how hard it is to strike the right balance between fiction and history: a novelist needs to avoid the temptation to overload a novel with information that he/she had obtained during the research process. The challenge is how to weave historical facts into a fictional story so that the flow is natural.

The best historical fiction teaches readers something new without them realizing that they are learning it. It’s all about “show” rather than “tell.”

Q: The New York Times review of the book says, "Que Mai has said that she chose to write 'The Mountains Sing' in English to gain the distance a second language provides — a distance necessary to approach a disturbing history calmly. But writing in English also allows her to present to an audience in the United States a moving portrait of its former enemy, the North Vietnamese." Can you say more about writing in English vs. writing in Vietnamese?

A: The Vietnamese language is rich, beautiful, and musical. I have worked for many years as a translator and have always enjoyed transferring elements of my mother tongue into English.

Even though I wrote this novel in English, I wanted to protect the Vietnamese essence of my novel: my characters think, speak, and act the ways Vietnamese people do. Readers will hear Vietnamese language, proverbs, and poetry in The Mountains Sing.

Writing in English is challenging since I only had the chance to learn this language starting in the 8th grade, but it is a good challenge since I have been learning a lot, every day.

I feel it is important to insert Vietnamese voices into the canon of Vietnam War literature in English and to present stories from the eyes of normal citizens, and present Vietnam as a country and not just a war.

A: I have just successfully defended my Ph.D. viva and my Ph.D. thesis is a novel manuscript. This new novel is set in modern-day Vietnam as well as during the late ‘60s.

Unlike The Mountains Sing, which focuses on one family, my new novel takes into account the experiences of three different families whose fates are bound together by destiny.

A: My novel was launched into the pandemic. First, I was devastated as my book tour had to be cancelled. But then I found so much kindness in so many amazing people: from booksellers, librarians, reviewers, the media, readers, to literary champions.

Thanks to their help, my debut novel has been named a New York Times Editors’ Choice, a USA Today most popular debut novel of 2020, a Goodreads best historical fiction novel, a Book Riot best book for book clubs. I am beyond grateful and am so thankful the book is being translated into many languages and is available in English now in many countries around the world.

I would like to thank everyone who has been supporting The Mountains Sing. I am particularly indebted to my agent, Julie Stevenson at Massie & McQuilkin Literary Agents, and my editor, Betsy Gleick at Algonquin Books. Without them, my novel would not be where it is today.