Q: How did your mother come up with the idea for Jerusalem as a Second Language, and for her characters Manya, Yuri and Galina?

A: We spoke to our mother about this question when she first received it, and she said that, while traveling as a tourist in Jerusalem, she had begun to notice small groups of Russian immigrants -- in shops and restaurants and walking in the streets -- and that that had led her to start thinking about what it would be like to move from a country where you were denied the right to live openly as a Jew to a country where your Judaism was not only accepted, but assumed.

That thought remained with her once she had returned home, and it became the seed from which the novel eventually bloomed.

She said she has never known, in any of her fiction, how her characters come to her. She would give herself over to a story she was writing and suddenly find herself writing as another person. "I opened my mouth one day and Manya's voice came out," she said. She then had to create Yuri, as she put it, "to give Manya someone to rub up against." 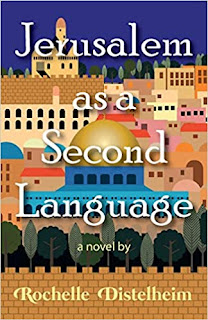 In writing about their marriage, she said she had also drawn upon her own parents' marriage for inspiration. Her father had been raised in an ultra-Orthodox home, where religious rules and rituals were strictly adhered to, while her mother had grown up in a much less observant home, where Judaism was more of an identity than a daily practice.

The compromises that disparity required them to make once they'd joined their lives is something that had always intrigued her.

There isn't too much mystery about where she came up with the idea of Galina. As the mother of three daughters, she had decades of experiences to turn to in bringing that character, and her relationship with her parents, to life.

Q: The novel takes place in Jerusalem in 1998 -- what kind of research did your mother do to write the book, and do you know if she learned anything especially surprising?

A: Our mother conducted research for the book by doing extensive reading on life in the Soviet Union -- David Remnick's Lenin's Tomb was one work she relied upon heavily -- as well as on life in Jerusalem at that time.

More importantly, though, she also returned to Jerusalem, where cousins of hers (who were living there) were able to connect her to groups of Russian immigrants willing to discuss their experiences with her.

We don't know if she learned anything that was especially surprising to her while she was there, but what is not at all surprising to us is that she was able to conduct her research this way. Our mother never met a stranger and was endlessly curious about and interested in others' lives.

It was one of her great gifts as a writer, not to mention as a person, that she was so able to empathize with others no matter what their situation, and that she was so warm and magnetic, that people happily opened their lives to her.

Q: How was the novel's title chosen and what did it signify for your mother?

A: Our mother always said that the title appeared in her mind one day, as if handed to her. It seemed to her to be the ideal way to convey the fact that Jerusalem is so much more than simply a city -- that to move there involves so much more than merely a change of address. It involves a change of heart, of soul, and of mindset as well.

In reading the novel, we noticed that its pages are so infused with the sights and sounds and smells, the energy and emotions, and even the rhythms of that city, that Jerusalem is almost a singular character in the book in and of itself.

Jerusalem As a Second Language is a timeless and universal story about the search for belonging. Because it has such relevance in today's complicated world, readers can easily identify with the struggles Manya encounters in that search.

Never one to accept easy answers to life's questions, she is also never one to turn away from the questions. She never says yes if she means no, just to avoid making waves, but she also never stops yearning for a path that will take her to a yes that she can mean with all her heart.

Although she continues to long for the life she'd left, by the end of the novel, Manya has, to her own surprise, begun to build a new life in this alien country that has tested her in ways she never would have thought she could survive.

When the reader sees her last, she is bruised and battle-weary, yes, but she is also still deliberating, still debating, still negotiating, and still believing that she might very well find that sense of home that she's been craving.

We think our mother wanted her readers to turn away from their last sight of Manya with a renewed sense of awareness of all the ways in which, in even the most complicated of lives, heartache can be tempered by hope.

A: At the time of her death, our mother was two-thirds of the way through a poignant and powerful novel about a Jewish widower in his 80s, living in a suburb on Chicago's North Shore. It wove a rich tapestry from his relationships with his two adult daughters and their husbands, as well as with his grandchildren and his Mexican immigrant caregiver.

Our mother's first novel, Sadie in Love, published in 2018, which tells the story of a Polish immigrant, matchmaker, suffragette, and lover of ballroom dance living on New York's Lower East Side in 1913, has been earning rave reviews from its readers. We're sure that Jerusalem as a Second Language's readers would love it as well.