Deborah Noyes is the author of We Are All His Creatures: Tales of P.T. Barnum, the Greatest Showman, a new young adult work of fiction. Her other books include Ten Days a Madwoman and A Hopeful Heart, and her work has appeared in a variety of publications, including Threepenny Review and The Boston Sunday Globe. She lives in Portland, Maine.

Q: Why did you decide to write this collection of linked stories focused around showman P.T. Barnum's family and others in their world?

A: I hang out in the 19th century a lot as a writer, and when you do that, and have certain interests—cabinets of curiosity, zoos, magic, vaudeville, the circus, spirit photography, hoaxes, anything—Barnum’s name comes up a lot.

Besides being a show and circus man, he was a politician, a celebrity-making machine, and a collector.

He collected everything from wax figures to exotic animals to people, what the press called “living curiosities,” including giants, Little People, bearded ladies, and tattooed men.

Since Barnum himself already had so much ink--most of it generated by him and printed in mammoth bold type--I wanted to hear more from some of the real and talented entertainers (human and animal) he built his entertainment empire on, and from some of the women in the showman’s life. He's what they have in common.

Like my earlier book, The Ghosts of Kerfol, this is a collection of loosely linked short stories. The idea was to mimic the rings at the circus...or for the reader to experience walking from exhibit to exhibit to see the next sideshow figure on stage. The story form worked better to that end than the linear intimacy of a novel. 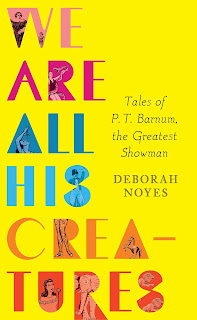 A: I understand the urge to collect! It sums up my early writing process. Before I distill material into a draft, whether fiction or nonfiction, the first thing I do is collect stuff. I fill folders—digital and paper—start a massive Pinterest file of pictures, and saturate myself in the subjects' world.

My very favorite things to collect are old photographs: tintypes and cabinet cards. The germ of my Barnum book was a cabinet card of General Tom Thumb (Charles Stratton) and his wife Lavinia Warren that I found in an antique store in Northampton, Massachusetts.

I knew enough about P.T. Barnum to recognize the Strattons, and I couldn’t stop looking at that picture and wondering about their lives. I was surprised to learn that the Strattons were the celebrity power couple of their day, feted by President Lincoln, Queen Victoria, and other leaders and influencers.

My visual folder for this project eventually got so big that I asked my publisher if we could include a few images in the final book.

A: In one of his ads, Barnum called himself, “The sun of the amusement world from which all lesser luminaries borrow light.” He definitely saw himself as the generous heart of the universe.

His acts—even seasoned performers like opera singer Jenny Lind, the Swedish Nightingale—along with his wives and daughters, were in his orbit. They were his dependents or creations, his "creatures," as one of his girls observes in the book.

I think, for her, this equated with not being "seen" by her father, except as a blip in his larger story. So it echoes her feelings, but I meant it ironically, too, since he isn't that present in the book.

Q: You note, "Barnum himself doesn't much figure into the stories." Why did you make that choice?

A: We Are All His Creatures is about the collection—not the collector. If you’ve watched the musical The Greatest Showman, it may be most of what you know about P.T. Barnum, and he would have approved of the film’s larger-than-life take on his biography. It’s what he would have wanted you to see. But in my book, he's life-sized, and others do the talking.

A: Revising a middle-grade book about Balloonomania and Sophie Blanchard, an early French aeronaut and the first woman to make her living in the air. And I'm waiting (with excitement!) on artist sketches for a graphic novel text about the Salem Witch Trials.

A: My middle-grade biography A Hopeful Heart: Louisa May Alcott Before Little Women comes out this October. Hopefully fans of Greta Gerwig's new film will be curious about the topsy-turvy childhood of Little Women's author, who "paddled her own canoe" long before most young women had a mind (or opportunity) to.