Reverse Q&A about my new book, questions from my father, Marvin Kalb! 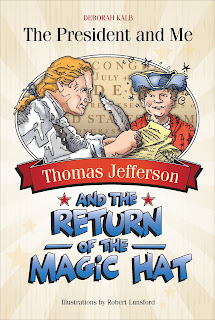 I am delighted to present a reverse Q&A, where my father, Marvin Kalb, asks me questions about my new middle grade novel for kids, Thomas Jefferson and the Return of the Magic Hat. It's the third in a series, following George Washington and the Magic Hat and John Adams and the Magic Bobblehead.

Q: Why are you writing books for young people about our nation's "Founding Fathers"?

A: I’ve been interested in history for a long time—it was my major in college. I’ve also worked on books about history and government for adults. But I’ve always had a soft spot for middle grade kids’ books—I was rarely without a book when I was that age—and have always wanted to write fiction. So mix it all up…and there you have it!

The books are about the early presidents, yes, but they are novels. The main characters are a group of present-day fifth graders in Bethesda, Maryland, who go on amazing time travel adventures and meet figures like George Washington, John and Abigail Adams, and, in this new book, Thomas Jefferson.

In addition, the kids deal with problems in the present day, like not speaking to your best friend, or dealing with a newly blended family, or being the new kid in town. They go back and forth between the past and the present thanks to a magic hat (in the first and third books) and a talking John Adams bobblehead in book 2.

Q: Were there any differences researching the Jefferson book from your Washington and Adams books?

A: Not really. I did the same kind of research for all three books. I read books written for both kids and adults about the relevant people. I read various letters and other material on line. You can find John and Abigail’s voluminous correspondence, as well as letters between Adams and Jefferson, and other fascinating information, on various historical websites. And I visited the historic sites associated with each president—including a visit to Mount Vernon some years back with you!

Q: Racism clearly is a major, yet very sensitive, issue with Jefferson.  How did you decide to address it?

A: Thank you for asking about that. With Jefferson, you have the author of the Declaration of Independence who owned other people, including his own children--the family he had with Sally Hemings, an enslaved woman at Monticello. The children eventually were granted their freedom, but Sally Hemings never was.

One of the main characters in Thomas Jefferson and the Return of the Magic Hat is Madison Hemings, the son of Jefferson and Sally Hemings. As an older man, he wrote a memoir about his experiences growing up as an enslaved person at Monticello. Readers of my new book get some insight into his childhood, and how his life contrasted with that of his father.

Throughout this book and also George Washington and the Magic Hat, my present-day characters wonder how these two early presidents could have reconciled their support for freedom and democracy with their holding other people in bondage.

It’s an ongoing discussion, and ties into the current-day debates over the Black Lives Matter movement and the discussions about whether to retain statues and monuments to Jefferson and Washington. I’ve tried to provide a nuanced approach to these early presidents, acknowledging the good they did while also taking into account their failures. 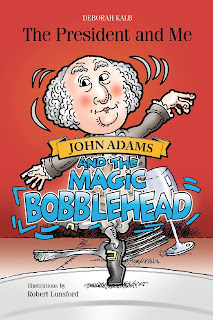 A: I would say his love of learning and of books ranked high on my list. He famously said, “I cannot live without books,” a sentiment with which I concur.

And of newspapers. He said that “were it left to me to decide whether we should have a government without newspapers, or newspapers without a government, I should not hesitate a moment to prefer the latter.” As a former journalist, I agree with that. Especially when we now have a president who considers the press the enemy of the people.

I also admire his quick mind and writing ability, and the Declaration of Independence is a historic icon.

But, as I said above, there was the other side to Jefferson. Offended is not strong enough a word to describe how I feel about slavery. Like my characters, I don’t understand how Jefferson could reconcile the words of the Declaration with owning other people, including his own children.

Q: Of all your young characters, whom do you admire the most? And why?

A: Oh, well…I’m going to have to give a non-answer here. I love all of them. I admire Sam, in book 1, for his humor, his acting ability, and his thoughtful demeanor. I admire Ava, in book 2, for her love of writing, her clarinet playing, and her gift for friendship. And I admire Oliver, in book 3, for his capacious brain and his ability to overcome social challenges.

Join me and illustrator Rob Lunsford for a virtual book launch at Politics and Prose Oct. 7 at 7pm Eastern--here's the link: https://www.eventbrite.com/e/pp-live-deborah-kalb-rob-lunsford-thomas-jefferson-and-the-magic-hat-tickets-120069459987