Clarissa Harwood is the author of the novel Bear No Malice. She also has written the novel Impossible Saints, which focuses on many of the same characters.

Q:  In the acknowledgments to Bear No Malice, you write, "Bear No Malice began, as so many novels do, with a “what if” question: what if I took the villain of Impossible Saints and made him a hero? What would Thomas Cross’s story look like from his own perspective?" What was it like to write from Tom's point of view, and how did you come up with your character Miranda?

A: To be honest, it was very difficult to write from Tom’s point of view because I’d thought of him as Paul’s nemesis for so long while writing Impossible Saints. I had to interview Tom many times and learn how to listen to him (to this day he is the only character in any of my novels who ended an interview abruptly by cursing me and walking out!).

Many times I rued the day I cavalierly imagined an annoying colleague for Paul while writing the first draft of Impossible Saints without thinking that someday I might need to spend a great deal of time with that annoying colleague. Now I love both Paul and Tom equally: it’s as if they’re two squabbling sons of mine!

My first impression of Tom was of a womanizing, arrogant, domineering man, but as I got to know him better with each draft of the novel, I saw how complex he really was underneath his lies and masks, and his good qualities began to shine through: he’s a genuinely warm person, the best kind of extrovert who wants to help others. And yes, he is deeply flawed, but he’s also willing to learn and change.

Miranda actually existed in my mind, albeit in a vague form, before Tom did. She seemed to be floating around waiting for a story. I always wanted to write about a Lady of Shalott figure who is isolated from the world because of a secret or curse in her past.

Miranda was also an easy character to develop because I can relate to her personality and understand her better than Lilia (the suffragette protagonist of Impossible Saints) because she’s more conventional on the surface, whereas Lilia is always storming around doing things that scare me! I love Miranda’s quiet strength and stubbornness, and she’s just as much a feminist as Lilia in her own way. 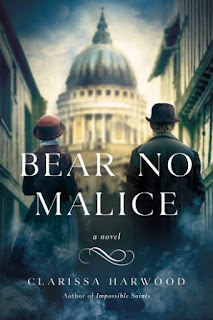 Q: Both novels focus on clergymen. What role do you see religion playing in the books?

A: Paul and Tom were inspired partly by my frustration with priest and minister stereotypes in fiction. At the time I had read too many too-good-to-be-true Christians in inspirational fiction and, on the other end of the spectrum, too many villainous pastors and priests in mainstream fiction.

I wanted to find a middle ground, to represent people of faith in a more realistic way, as generally good people who make mistakes. Based on responses from readers, I think I’ve succeeded.

By setting my novels in the first decade of the 20th century, I could also capture the pressure the church was feeling to prove its relevance in the modern world (a pressure that exists even more strongly today, of course).

There was a new acceptance of agnosticism and even atheism in society, which was a huge contrast to a hundred years earlier when Percy Bysshe Shelley was expelled from Oxford university for writing a pamphlet advocating atheism! I like writing about periods of change and turmoil.

Q: What kind of research did you do to write these books, and did you learn anything that especially surprised you?

A: Because of my academic background, I was already familiar with the language and culture of the era in which my novels are set.

Some of the more specific research I did was the same for both Impossible Saints and Bear No Malice. I needed to know Church of England history as well as the history of penitentiaries, which figure prominently in both novels. (By penitentiaries, I’m referring not to prisons but to the charities first established in Victorian England to reform “fallen” women.)

New research for Bear No Malice with respect to Miranda, my female protagonist and artist, had me delving into the art world of Edwardian England.

And without giving too many of Tom’s secrets away, I needed to research social reforms and reformers of the era. I learned about child labor, the slum areas of London, prison reform, and illegal boxing clubs.

The most fascinating discovery I made was a real-life historical person, Osborne Jay, who was the perfect mentor for Tom and an important influence on Tom’s work at the end of the novel.

This is not the first time I’ve imagined a character who would fit perfectly into my novel’s world, only to find in the course of my research that such a person really existed! What I love most about writing historical fiction is the way research and imagination trigger and feed off each other in an endless cycle.

Q: The Kirkus Review of Bear No Malice calls it "A smart and highly civilized tale about love, temptation, and second chances." What do you think of that description?

A: I love it! I think it gets to the heart of the novel and expresses my themes very well, especially “second chances.” More than anything else I’ve written, Bear No Malice takes broken people who have made serious mistakes and gives them hope. That’s a really important message for everyone: no matter what you’ve done or what you’ve suffered, it’s never too late to learn, grow, and even find love.

A: I have several projects on the go that I’ve been circling back to, but all are still in the first-draft stage, so I don’t like to talk about them until they’re more fully fleshed out. I will say that I’m branching out into different historical periods and different countries, which I never thought I’d do. It’s exciting as well as daunting!

A: I think fans of the British TV show Grantchester would enjoy my novels, especially Bear No Malice. “Grantchester meets Great Expectations” is part of the book cover blurb, and I think that’s a great description. There’s definitely a Dickensian quality to Tom’s life, and he grapples with moral and ethical issues in similar ways to Grantchester’s Sidney Chambers.

Thanks so much for interviewing me, Deborah!