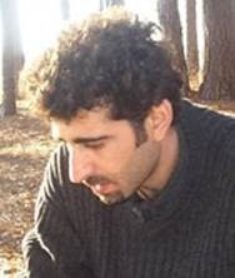 Firas Sulaiman is the author of the poetry collection Forgetting. His other books include Her Mirror is an Unarmed Hunter, and his work has appeared in a variety of publications, including Banipal and The Wolf. Originally from Syria, he lives in New York City.

Q: Over how long a period did you write the poems in Forgetting?

A: There are, to my mind, two kinds of time that get factored into this calculation. One is the universal time during which my unconscious is engaging these ideas and themes and they then manifest in real quantifiable time whereby they take shape and land on the page.

Every poem I write I hope is a manifestation of all the experiences that shaped and informed me, and that gets converted into works that hope to make their way into the future, to secure a spot in unknown time and space.

Since we are never guaranteed a future or a next poem, each effort is a combination of the time we know and the time we cannot know but seek to capture through desire, dream, and idea.

This was the first collection I wrote entirely in the United States; it took a total of eight years. 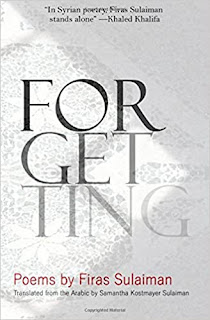 A: Primarily, I let my own chaotic drive organize it, particularly in the original Arabic publication. But when the text was translated and edited, the emphasis was on entering the text with short, more accessible pieces building up to longer works and then ending with more mid length pieces. It was the intent of the translator and publisher to ensure the two parts of the text offer some thematic cohesion.

Q: Can you say more about what inspired the last poem in the collection, “America”?

A: The compelling issue one faces when writing about anything that is both a tangible reality and an idea locked in abstraction. With “America,” I relied, in part on what I already knew and thought and sensed before arriving in the states. After a brief time here, I began to observe the many contradictions and paradoxes the idea and the place contained.

My relationship to place is real but it is also fabricated by misunderstanding and shaped by doubt. We often internalize what we see and augment that with what we imagine, even what we believe.

I wrote “America” soon after my arrival; I would write a very different poem today - but everything I write is a product of the time, the hour, the moment it is formed.

A: Forgetting is an idea about which I have always been obsessed. I'm very interested in how the concept of forgetting can override memory and thus create additional space and newness.

I find the burden of memory is often so heavy as to be distracting and dominating - a sort of prison. So I committed myself to the project of forgetting in order to turn the abstraction into at least the illusion of fresh, liberated, and new horizons. Forgetting is a kind of erasure that allows for the opportunity to create and re-create.

A: I am currently working on a few projects. I am about to publish a volume of several previously published works from seven or eight collections spanning 30 years of my work, an anthology of sorts.

And I just completed an experimental piece that seems genre-defying but which combines aphorisms and the use of Sufi-inspired language and ideas to interrogate skepticism, the concept of god and the notion of the absolute.

Lastly, I am currently editing a collection of short stories that keep shape shifting and have no publication date or specific trajectory. They may remain works in progress.

A: I'm recently obsessed with longevity. I'm curious how contemporary works stay relevant in an unforeseeable future, how some literature gets cemented into our collective consciousness and remains continually worthy and deserving of revisiting over the long span of time.

With the increased speed of technological advances that affect both what and how we write, I'm interested in how works written now will get archived in the future.