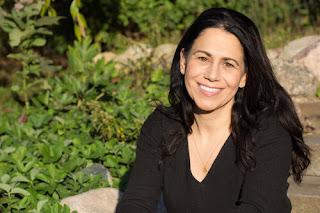 Natalie Bakopoulos is the author of the new novel Scorpionfish. She also has written The Green Shore, and her work has appeared in a variety of publications, including Tin House and The New York Times. She is an assistant professor of creative writing at Wayne State University, and she lives in Ann Arbor, Michigan.

Q: How did you come up with the idea for Scorpionfish?

A: I’ve spent a lot of time in Athens, and in one particular apartment my balcony overlooked a beautiful, lively courtyard, and I was taken with the both publicness and privateness of this space: you heard arguments, Skype conversations, children playing, people talking in hushed voices, the woman across from me pointing silently to the balcony above, trying to ask me what was going on there.

I began to imagine two characters there, and what conversations might unfold, both for an audience of one and whoever else might be listening.

Several years ago, I spent a semester teaching for Semester at Sea, a floating university with 600 students, 40 faculty, and 100 staff members. In some of the longer stretches from port to port, I fell in love with being in the middle of the sea’s vastness.

One beautiful afternoon I was out on my room’s balcony and saw the ship Captain standing on the mast outside the control room, up high, just looking out at the horizon. I began to imagine the voice of a Captain, and what it might be like to stop, for whatever reason, a life at sea.

Except instead of the Pacific I imagined the Aegean, a site of crossings for holidays and long weekends, but also for those looking for asylum or a better life—a crossing that could be both peaceful or deeply traumatic, depending on your position.

I could trace it back further, too, the year before, the month before, a decade earlier: I think when you’re writing a novel, everything goes into it, even if, like Scorpionfish, it’s a work of fiction.

Everything you read or see or experience or feel somehow inspires you, often in ways that surprise you, or that you hadn’t intended. I think that’s what I love about the process.

Q: You tell the story from Mira's and the Captain's perspectives--did you write the novel in the order in which it appears, or did you focus more on one character before turning to the other? 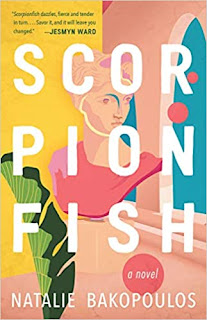 A: That’s a really good question. I’m not a linear writer at all, and I think this book definitely had me moving around in space in time, from narrator to narrator. I’d write a section of Mira’s that would make me think of something about the Captain, or vice versa.

In this case I saw a lot of the scenes in the book early on; I just didn’t know exactly how I’d get there.

Both narrators are newly alone in various ways, and it’s through their conversations that they find connection. They’re also sitting on their respective balconies, which are of course both public and private. They’re talking to each other but it doesn’t mean they don’t have a larger, collective audience too. I suppose by extension, the reader is their larger audience.

Q: The Publishers Weekly review of the book says, "This riff on the adage that you can never go home poses essential questions on what it means to belong." What do you think of that description?

A: I think it’s an interesting one, and the novel is, to my mind, definitely concerned with both ideas of home and belonging, and how those two ideas are linked.

To me, Scorpionfish explores the intimacies and boundaries between people—and the ways they are crossed, or blurred, and how those things help us define the idea of “home.”

I think for Mira, she’s not troubled by a changing Athens; she herself is changing right along with it. She’s skeptical of nostalgia and the rhetoric around it.

Both Mira and the Captain are also troubled by the politics of the financial crisis and the way Greece was blamed for all its problems as opposed to a consideration of a geopolitically and economically complex narrative, say.

This tendency to place blame on one particular thing, one particular event, is a common, natural one, of course. But it also ignores a lot of other narratives—I think this might be at the heart of the book, or something in the back of my mind as I was writing.

And without doubt, one of my literary preoccupations is belonging. I’m interested in the sorts of families we create that are outside the boundaries of the nuclear family, and how those families affect the way we navigate a place.

I always want to write women in particular who choose a path that’s a bit unconventional, women who approach the world on their own terms. Or, characters who might traduce social norms but are nonetheless still affected by the pressures of those norms.

A: Me, I read to be moved, to be provoked, to see things a new way, to think deeply about something, to enter beautifully rendered worlds and, most of all, to enter another consciousness and move through the world with that particular perspective and point of view and use of language.

I suppose I aim to do the same things as a writer. I hope that this book will stay with readers even after they finish it, whether it’s a particular scene, or description, or just a general feeling.

Of course, you can never predict the way your own work will be received, of course, or what, if anything, will resonate with readers.

When writing, one thing I was thinking about was the relationship between love and grief. That love has to make room for pain, for disappointment, for sadness, for loss.

I wanted to think about love in the most unjudgmental, kind, open-hearted way; love that blurs boundaries and transcends them, that allows for mistakes, that allows for independence and autonomy and vulnerability, that is not petty or oppressive or self-centered, that is not about power or possession.

And maybe how all this relates to art and storytelling: whose stories we tell, how we tell them, and how it’s impossible to separate the story from the storyteller, the art from the artist, how the telling of one version of events by default eclipses all the others. How do we tell the story of a place? Or ourselves? Of others?

A: Several things, though I, like most people right now, am finding it really difficult to focus, to concentrate. But right now I’m working on a new novel, as well as a nonfiction project: both have to do with Greece in one way or another. I suppose that’s where my imagination wants to stay.

A: I think I’ve gone on long enough! Thank you so much for giving me the opportunity to talk a bit about the book. I really appreciate it.