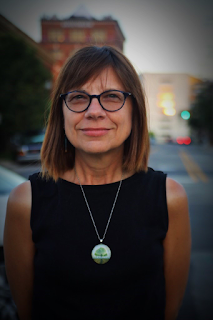 Heidi McCrary is the author of the new novel Chasing North Star. She works in the advertising marketing industry, and she lives in Kalamazoo, Michigan.

Q: How did you come up with the idea for Chasing North Star?

A: I have the beginnings of several stories, but I kept coming back to Chasing North Star. With the popularity of books such as The Glass Castle by Jeanette Walls and Little Fires Everywhere by Celeste Ng, I realized that few topics are more entertaining than the simple story about the dysfunctional family.

While the book I wrote is officially a novel, it is inspired from my own dysfunctional childhood. 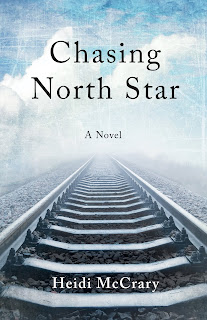 A: The research I did was with my own siblings who are older than me and often remembered more details of our youth, and yes, surprisingly, I learned a lot about my mother. I also realized just how little I knew about her upbringing. Not surprisingly, she was also raised by an abusive mentally unstable mother.

The book reflects the true stories of my childhood along with the fiction part—the backstory of my mother’s own childhood, which is where the book spins into fiction. This gives the reader a glimpse into understanding how the abusive cycle can continue. And how it can end.

Q: Most of the book takes place in the 1940s and in 1970. Did you write the book in the order in which it appears, or did you focus more on one time period before turning to the other?

A: The book started out as a memoir, with the focus on 1970, as a band of siblings deals with a mentally-unstable and violent mother.

With dual narrative being extremely popular, I wanted to give readers of Chasing North Star a glimpse into moments in the mother’s life in Germany as she grew up — beginning from her own childhood up to when she marries and travels to America. The two stories eventually collide in 1970.

A: As I stated earlier, nothing is more entertaining than a dysfunctional family, and I believe that the majority of us have some sort of dysfunction in our childhood. It’s funny, any time I talk with someone who has read my book, they begin sharing their own stories about their colorful childhood.

With that in mind, I hope readers finish the last page, having enjoyed the ride—a bittersweet story about a band of siblings who survived living with a mother who suffered from a cocktail of illnesses. I begin the story with a quote - “That which does not kill us, makes for a great story.” Right?

A: In an abrupt left turn, I’m currently working on a bit of a hybrid — part novel, part “how-to” that looks at the world of golf through the eyes of a feminist.

Written with a humorous voice, this book coincides with the surprising interest in golf again, as the world rediscovers a sport that had been losing fans until Covid-19 reared its head. Now, suddenly, golf is the go-to activity for many families.

A: In today’s world, where we are now sensitive to offensive language and racist or sexist rhetoric, there is a newfound challenge in writing about 1970 and how we dealt with mental illness and life in general. While I crafted narrative that is respectful to following this train of thought, I believe I have maintained the flavor of the times through the dialogue of 30 years ago.

I am also aware that the use of the word “crazy” is insensitive and inappropriate today. After much contemplation, I have left the word in the dialogue of the characters in this book to reflect the times and essence of the story. I hope readers will understand that this decision did not come lightly, and is important to showing the world as it was in 1970.