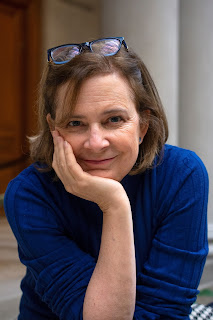 Clare McHugh is the author of the new novel A Most English Princess, which focuses on the life of Queen Victoria's daughter, Princess Victoria. McHugh worked for many years as a journalist. She lives in Washington, D.C., and Amagansett, New York.

Q: You have a family connection to Princess Victoria's family. Can you say more about that, and how it led you to write this novel?

A: My grandmother’s parents were in service—they were the coachman and the housekeeper for a man named General Robert Montgomery who was the commander of South Coast Defense in Portsmouth, England.

My grandmother often saw members of the royal family travelling to Osborne, their home on the Isle of Wight, through Portsmouth. And, on at least one occasion, my great-grandfather drove the carriage that transported King Edward VII, Princess Victoria’s brother, and her son, Kaiser Wilhelm. We have a family photograph of that moment, which is included in the back notes section of my novel.

Certainly, my sense that royal history intersected with my own family’s history deepened my interest in the life of Princess Victoria. But I was also intrigued by her because she was a “liberated” woman in many ways, committed to the education of women, and their full participation in society. But she was also in a deeply archaic role, and had been married to her husband for dynastic reasons.

I was interested in how she balanced her desire to improve the world with the restrictions imposed on her in her adopted country, Prussia. 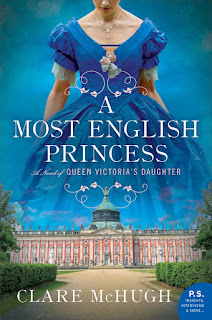 A: The research for this novel began with my reading of the letters between Vicky and her mother, Queen Victoria, which have been published in five volumes. Both women leap off the page—their writing is so vivid and personal. You are drawn to both of them, although Queen Victoria can be a very strict and bossy mother!

I read also the biographies of everyone involved—Vicky and her mother to start, but also Prince Albert, Bismarck, Fritz (Vicky’s husband, later Kaiser Friedrich III) and her son Willy (later Kaiser Wilhelm II.)

What surprised me the most was how determined Vicky was, and how brave. She refused to keep quiet when all around her people were embracing militarism, oppression, anti-Semitism. But she was also a difficult mother like her own mother had been, and extremely demanding of her children.

In many ways that urge to “improve” everyone around her backfired, in a manner that was disastrous for the monarchy in Prussia and for the future of Germany.

Q: How would you describe the relationship between Vicky and her son, Kaiser Wilhelm of Germany?

A: I would describe the relationship between the two as “ill-fated” although there was great love on both sides. Vicky had fierce ambitions for her eldest son. She hoped he would be a carbon copy of her saintly father Prince Albert, whom she adored.

However, Vicky also felt a tremendous amount of guilt when it came to Willy, or William, as she called the future Kaiser Wilhelm. She blamed herself for the injuries he suffered during a botched breech delivery. She worried constantly that he would not be equal to the huge responsibilities he would have as king of Prussia and later emperor of Germany.

For his part, Willy loved his mother and wished to please her but she could be harsh and insensitive to his needs. She made a poor choice when it came to appointing his tutor. Also, as he grew, Willy was more and more under the influence of his grandparents, who often undermined Vicky as a parent.

At the very end of his life the Kaiser came to appreciate his mother more, but he always felt that she hadn’t fully accepted and appreciated him and that she had political ideas that he could never agree with.

Q: You've worked as a journalist for many years--why did you decide to write this novel?

A: Good journalism is accurate, clear-eyed, and honest. But to truly evoke the inner life of a person, I believe you have to turn to fiction. In Vicky’s case, two excellent biographies have been written, but I felt both held her at arm’s length. Neither could recreate the experience of being her, so I decided to try my hand at doing that.

It was a struggle to give up some journalistic convention and rely on my imagination, but exhilarating, too. I hope readers will think that my portrait of Vicky is believable and compelling, and also learn something about a very dramatic chapter in European history.

A: I have started a new novel set in the U.S. in the 1970s, ‘80s and ‘90s. It does involve some historical characters. But I am also interested in writing another royal novel. So, I have to see what I get traction on first!

A: It’s interesting to think about this: Quite soon after the marriage of Kate Middleton and Prince William in 2011, a new law was passed by Parliament and endorsed by the heads of the Commonwealth nations. No longer would the order of succession to the British throne favor males over females. Now the eldest child, regardless of sex, would be heir.

Perhaps this measure should be dubbed “Vicky’s law”! Princess Victoria was last person passed over for the throne because she was female. All the sovereigns since Queen Victoria either had boys first, or, in the case of the current Queen’s father, only girls. It makes Vicky a particularly poignant person in history!