Tori Eldridge is the author of the new novel The Ninja's Blade, the second in a series following The Ninja Daughter. An actor and martial arts expert, she is based in Los Angeles.

Q: This is your second novel featuring your character Lily Wong. How did you originally create her, and how do you think she's changed from the first book to this one?

A: Lily Wong emerged during a stream of consciousness writing for a short story competition. I was writing another novel at the time when I received the email notice. The deadline was the following night. I took a premise I had from a 200-word thriller writing challenge and met Lily as my words hit the page. The scene ended up becoming a character-defining incident.

The story didn’t win the competition, but it was published in Suspense Magazine’s Best of 2014 issue. I learned more about Lily, her unusual family, and her heroic life when I expanded on my story to write The Ninja Daughter.

As far as change, at 25 years old, Lily is in a constant state of discovery, courage, insecurity, and rebellion. She risks big, fights hard, and feels deeply.

During The Ninja Daughter, she is challenged mentally, physically, and morally. The violence and doubt from the first book follow her into The Ninja’s Blade, which is important because violence doesn’t happen in a vacuum. Whether done to us or by us, it leaves a mark on our psyche and raises questions that must be answered. 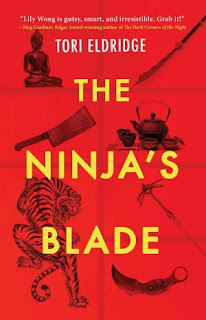 Q: How did you come up with the plot for The Ninja's Blade?

A: After touching on the subject in The Ninja Daughter, I wanted to do a deeper dive into the commercial sex trafficking of youth for The Ninja’s Blade.

But instead of beginning with a plot or characters, I began with months of research. I studied articles, documentaries, interviews, and reports. I learned heartbreaking stories about survivors and discovered a noble nonprofit organization called Children of the Night, founded by Dr. Lois Lee.

Characters formed in my head as I strove to encapsulate the varied and insidious ways sex traffickers prey upon our youth and the heroes fighting on their behalf. One thing led to another, and I had another exciting, twisty, and very gritty thriller, lightened by the arrival of Lily’s meddlesome Hongkonger grandparents, her mother’s 50th birthday bash, and a budding romance with the “perfect Chinese son.”

Q: As a martial arts expert and actor, how do those fields coexist with your writing?

A: My writing process has many similarities with acting, beginning with character research and ending with me acting out scenes in my kitchen. Writing, for me, can be a noisy and kinetic activity. I don’t just read out loud; I often speak the words as I write them so I can hear the sound and cadence of the language.

“Are you talking to me?” my husband often yells.

Then I waltz into his home office and ask to borrow his wrist, arm, or neck! 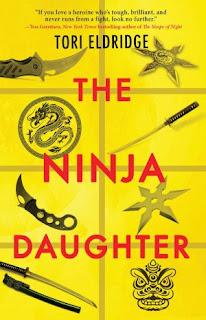 Fortunately for him, these requests are a lot less painful now that I’ve stopped training and teaching the ninja arts. Back then, my husband and sons had a well-earned respect for my capabilities and a wariness of my requests for body parts.

These days, I picture fight scenes safely in my mind. Although, every now and then, my husband will catch me rolling around the living room floor or leaping off furniture in a mock fight — so I can refresh my sense memory and better describe what Lily is doing. Needless to say, my writing process is rather amusing.

A: Goodness, I read from so many genres! Some old favorites include Pillars of the Earth by Ken Follett, The Poisonwood Bible by Barbara Kingsolver, Murder as a Fine Art by David Morrell, and the entire Asia series by James Clavell.

I just finished reading And Now She’s Gone by Rachel Howzell Hall and listening to The Mountains Sing by Nguyễn Phan Quế Mai and Binti by Nnedi Okorafor. Next up, Blacktop Wasteland by S.A. Cosby. I recommend all of them highly.

A: I’m deep into Hong Kong intrigue with the third Lily Wong novel, The Ninja Betrayed.

It’s another exciting tale of ninja intrigue, family trouble, and romance set during the 2019 Hong Kong protests. It’s fun to write about a city I’ve not only visited but that is close to my heart.

Soon after I began writing the Lily Wong series, our son fell in love with a Hongkonger woman. Amazing, right? We celebrated their engagement with her family in Hong Kong. They were married last year in Hawaii and are excepting their first child this November…in Shanghai!

A: Aside from my obsession with tea? I have published short stories in multiple genres and even have a narrative poem published in the inaugural reboot of Weird Tales Magazine. I also meditate daily and make time for yoga and hiking in the California hills. And you can stay up to date with all my writings at torieldridge.com.