Q&A with Douglas A. Martin 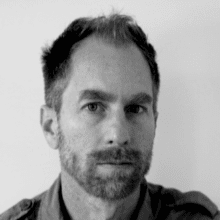 Douglas A. Martin is the author of Branwell: A Novel of the Brontë Brother, which was recently reissued. His other books include Wolf and Outline of My Lover.

Q: Why did you decide to focus on Branwell Brontë in your novel?

A: My books lead to each other, the next one, though they very seldom have appeared in any sequence of completion.

Branwell was my second published novel, though between the space of its appearance and my first I had gone to graduate school and worked on a collection of stories firmly rooted in autobiography and another novel that was also.

I spent a lot of time as an early writer trying to make peace with not wanting to come across like I could speak for other people and also trying to expand beyond relationships that had marked me and I felt had made me a writer.

One of my teachers who still remains a huge force in my life, Darcey Steinke, in a conversation mentioned him to me, talking about the way the family worked and the kids played.

Something in her anecdote made me understand and see suddenly this Victorian sexuality and a personality that was in ways like dimensions of what would become some of his sisters' characters, but with him it was to become the whole art itself. And by the whole art I mean living like a "writer" more completely than actually writing. 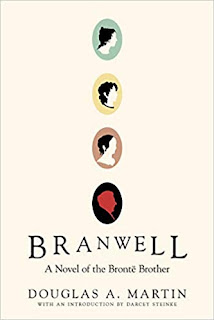 I knew those kinds of people, or thought I did if that was him, and it created a kind of sympathy. It is like one wants to write because of not seeing anything else like you want to be, but then not having the ability to keep the character of that going because models you have access to are all wrong for you.

I played around with it for a while as something I would do as an experiment, and then a funny thing happened where my boyfriend at the time I was starting drafting read the first few pages I had gotten down and got much more excited than he had ever been with the bits he knew was me writing about us.

Q: What did you see as the right blend between the historical figures and your fictional versions?

A: The more I researched the more I felt parallels that I could navigate and see across, even if on other sides in some of the spots, and then the more I looked into him, the more he became tonally connected by virtue of other tangents to a lot that oddly interested me at the time: du Maurier I found had after what she’d done with Jane Eyre in Rebecca done a biography of him and then I would also stare at pictures of French actresses, Adjani and Huppert, in a couple stills from Les Soeurs Bronte in a book that clicked more together for me, The Bronte Myth.

I had come to Branwell after writing another book attempting to break free from more pure autobiography, where I used a different myth to link up moments of the lives of painters, Balthus and Francis Bacon, and a poet, Hart Crane. Here like there my fiction becomes informed by previous representations. I look for a kind of bass note underneath all that.

Q: How would you describe Branwell's relationships with his sisters?

A: I think he wanted to remain a part of their circle at the same time that he wanted things outside of the home. That's a hard balance.

I think he really loved Charlotte, that there was a bond there that came out of creating their fantasy world together, and Anne and Emily did this too, alongside them. In games you sometimes relax your guard and feel more allowed to be vulnerable, knowing someone is in it with you trying to maintain the charm of the fantasy.

In my telling, Charlotte’s going off to school was leaving him alone in the world, that world being how he was meant to keep his father company, keep by his father’s side. That was just the first split.

And it shifted, like for me he is close to Emily at the end because also Emily had her own gripes with Charlotte’s eventual sense of how writing was meant to be in the world and public. The lovingness of Emily for Branwell is done wonderfully in the film Sally Wainwright did for the BBC, To Walk Invisible, but that wasn’t around until after my book.

I probably would have leaned into it even more or chosen to further complicate it if I had had this prior depiction.

There’s ambivalence everywhere. Anne was potentially even more scandalized by her brother’s actions, but she also existed outside the home in a way that the others do not for me in my read. This gives her movement towards a steady placidity.

Q: The Publishers Weekly review of the book says, "Though slender, this volume's beautiful declarative sentences are perfectly fitted to this famously imaginative, headstrong family; they bring Branwell Brontë's world to light." What do you think of that description?

A: It made me happy. Though it doesn’t seem like a slender book to me—the galley format might have given that impression. Whoever they had review my first book was nowhere near so kind to a first-time author. And Branwell is still my biggest book page count wise, aside from my study of Kathy Acker. Sometimes my books will be called novellas because of the length. There’s academic distinction and public perception.

A: For so many years now I have been working on a novel around or through I guess you would say the poetry of Elfriede Jelinek, an Austrian writer who did win the Nobel Prize but mostly known for her novel of the ‘80s, The Piano Teacher, filmed by Michael Haneke. She works almost exclusively in the theater now it would seem.

The poetry is early work, written when she was still in her 20s and not yet out of college. But I am interested in how a writer carries through and can continue to recast their abiding concerns in the different phases of their life. You get to watch how an aesthetic is cultivated and shaped.