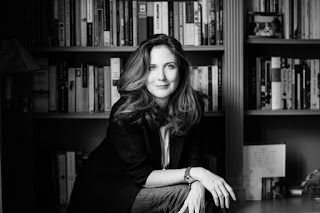 Ariana Neumann is the author of the new book When Time Stopped: A Memoir of My Father's War and What Remains. She grew up in Venezuela and now lives in London.

Q: Why did you decide to write When Time Stopped?

A: It didn’t start off as a book idea, but as personal journey to find my roots and solve the mystery of my father. The journey started around 1980 though I didn’t get all the pieces and documents that I needed until decades later. I began the proper research in 2011.

As I researched, and traced people all over the world, these remarkable stories of courage, love and defiance emerged. I felt strongly that they needed to be told. I’ve always written though more as a form of therapy. I had written short newspaper pieces, but I was hesitant about writing something longer.

In 2017 a Holocaust survivor who had managed live out the war in Italy hidden in a convent for three years told me that I had to write my family’s story. That I had to do it for him and for my own family.

Slowly, the stories became so important that I started to worry less about the writing and more about telling them and capturing their magic. It became a “book” in 2017 when a friend of a friend put me in touch with an agent and she sold the proposal to Scribner.

Q: The book tells your father's story and also your own, as you discovered more about his family history. What did you see as the right balance between the two as you were writing?

A: This is very easy because for me, the story of my father and my family was always the important part. Initially the book was just going to be about them, the narrative was 100 percent their story.

But my husband, who is a brilliant sounding board, felt that putting my journey in would anchor the story in the present. I was hesitant but then both my agent and my editors at Scribner insisted I had to "put" my story in it too. So I am in the narrative to help the reader travel in time, to tell the story from the perspective of a second generation.

I suppose the balance is around 20 percent my journey, 80 percent my family’s story. But really to me it’s always been about telling the family history and the stories of those brave and extraordinary people that helped them during World War II. The book is for and about them.

Q: How much did you know growing up about your father's experiences during World War II?

A: As a young girl in Caracas I knew nothing of my father’s experiences in WWII. I knew he was born in Prague and that he had emigrated to Venezuela in 1949. I was told, at some point, that he had a difficult war and had escaped a “broken” Europe but in my happy childhood in the tropics all that seemed a world away.

I did not know any details about the war because when I was a child my father never spoke about the past. It wasn’t until after his death that I discovered that my father had uncles and aunts and cousins. He was one of a family of 34 people.

A: In terms of what I discovered it was both shattering and supremely fulfilling. What happened to too many people during the war was horrific. Solving the mysteries of my family’s past allowed me to finally understand my father and find these great people who were not really forgotten but were definitely veiled in silence. I now have a vibrant family that I had never been told about.

On a more intrinsic level it has made me more aware of who I am, it has changed my identity and made me aware of my roots and the rich heritage that I came from.

It has also, on a practical level, shown me that if you want to write, all you have to do is write. Having a good story to tell certainly helps but the only way to do it is to sit down and write it, as honestly and passionately as you can.

A: I’m researching two things currently. One is about injustice and hope and involves three young men and a boat in 1940, the other one is about a brilliant and beautiful single mom and writer in the ‘50s and ‘60s… I am hoping they will be my second and third books!

A: One thing that I discovered in my research and that will remain with me always is how remarkable and resilient people really are. You can torture, imprison, and silence them but you cannot destroy their spirit.

Lastly, if anyone is thinking of researching their family stories they absolutely should. It is so rewarding to connect with one’s roots and family tales. We are all made up of our stories and that of those that came before us.

And if the past seems daunting, you shouldn’t be scared of the darkness because once you delve into it, you’ll find that there’s always more beauty and light than you expected. And if you don’t find the light and beauty right away, there are always walks in nature, mugs of warming hot tea (or chocolate) and a bit of Zumba to give you the strength to keep going.