Gabrielle Robinson is the author of the new book Api's Berlin Diaries: My Quest to Understand My Grandfather's Nazi Past. Her other books include Better Homes of South Bend. Born in Berlin, she lives in South Bend, Indiana.

Q: You write, "I never wanted to write this memoir." What made you decide to do so?

A: That question goes right to the heart of my story. When I first discovered my grandfather’s diaries after my mother’s death, I was eager to write about them. The diaries were his daily record working as doctor in Berlin 1945. But as I read further, I realized like a punch to the gut that he had been a member of the Nazi party. I hid the diaries, just as my mother had done.

Two years later, my husband and I were relaxing in a coffee house when suddenly I started to cry and my secret burst out. To my surprise Mike said that now more than ever did I need to write about the diaries. That thought kept me awake at night, but I couldn’t get started. It felt like a betrayal.

However, for the first time in my life I began to read about the Nazi period. I was surprised how historians stressed the importance of personal experiences, like the diaries, for our understanding of history. So at last I got up the courage to write this memoir.

Q: How much did you know about your grandfather's past as you were growing up? 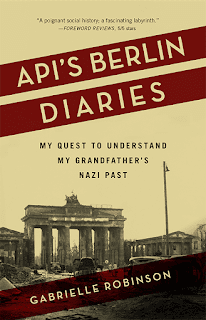 A: I was 12 years old when Api died, and knew little about his past, but the short time I spent with him were the happiest years of my childhood. Since my father had been killed in the war, he was both father and grandfather to me.

I knew he was born in Prussia and became an eye surgeon. He had lived in Berlin with my Hungarian grandmother, and their children, my mother and my uncle. But since I have no surviving family, much of what I learned about his life I found out through research in Berlin archives.

A: The book made me confront a past I had evaded all my life. As I grew up in postwar Germany there was complete silence about the recent past. Our history classes stopped with the end of World War I. Neither I, nor as I remember any of my friends, ever questioned this silence.

So now, late in life, I needed to come to terms with my German past. I had always been ashamed of being German for the country’s horrendous history of genocide and war, but I had never dealt with the guilt.

It was hard to face German guilt on such a personal level. I kept asking myself, “What would I have done if I had lived in the Third Reich?” What small acts of courage or cowardice would I have committed? Would I have given the Hitler salute or dared to refuse? How far would I have been willing to go to help Jewish neighbors?

I doubt that I would have had the courage to risk my life and stand up against the Nazis.

A: First, I hope readers will feel the “volcanic eruptions” of history on my grandfather’s life who had to serve in two world wars and lost his only son, and how these tremors still reverberate with me in the third generation.

That’s why my book moves between Api’s struggle in the ruins of Berlin and my happy memories of living with him after the war, many of which I thought I had long forgotten.

Perhaps this will trigger not only the reader's own childhood memories but make them feel more strongly how their lives have been impacted by the history of their times. For us all, biography and history intersect, and the past is still with us.

Second, I hope that the ultimate take-away that sticks with my readers is one of empathy, a strengthened faith in our common humanity, in our capacity for compassion and tolerance.

Although much of the diary focuses on the horrors of torture and persecution perpetrated by human beings upon one another, it also shows instances of kindness and love that testify to the power of the human spirit to breach the gulf of hate. 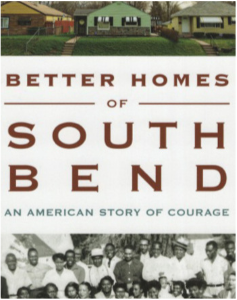 A: I have two projects. One builds on my book Better Homes of South Bend: An American Story of Courage, about Studebaker workers from the South who confronted Jim Crow in the North. It is going to be made into a play, written by the accomplished playwright Caleen Jennings.

The other project is a history in recipes, tentatively titled Recipes from a Dead Flyer’s Daughter, based on family recipe books that go back generations.

A: I hope readers of Api’s Berlin Diaries will think about the degree of Api’s guilt and then reflect on all our political responsibility. Although I do not believe in collective guilt, I do believe that we are accountable for what happens in our countries. The words of Martin Luther King Jr., who condemned not only the actions of the bad people but the silence of the good, kept ringing in my ears.