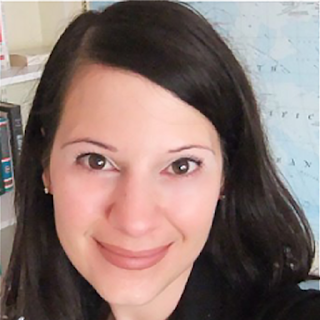 Jennifer Mercieca is the author of the new book Demagogue for President: The Rhetorical Genius of Donald Trump. Her other books include Founding Fictions. She is associate professor in the Department of Communication at Texas A&M University.

Q: How do you define a demagogue, and how do you see Trump and his rhetoric fitting into that definition?

I think Donald Trump is so fascinating because he has convinced his supporters that he is a heroic demagogue while everyone else understands him as the villainous demagogue. I show how he used specific rhetorical strategies to do that in my book. 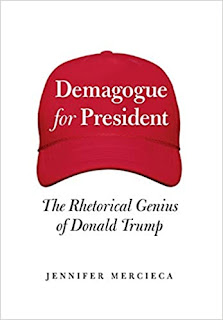 Q: You write, "It’s been exhausting, terrifying, exhilarating, and humbling to be a part of the public conversation about Trump’s demagoguery." Can you say more about the impact writing this book had on you?

A: It was rough, to be honest. I had to immerse myself not only in Trump's language, but in Trump's worldview. That meant I had to research white nationalists, the manosphere, and conspiracy theorists. I had to spend a lot of time hanging out in some of the darkest corners of the internet in order to understand the American political discourse of 2016. A lot of what I learned surprised me.

Q: How would you describe the rhetoric at the recent Republican National Convention? What about the Democratic convention?

Q: You conclude the book by stating, "Dangerous demagogues like Donald Trump have no power in a properly functioning democracy. This is the political project of our time. We must defend democracy." What would you like to see people do to defend it?

A: Our democracy was weak in 2016--Trump didn't cause that situation, but he exploited it to his advantage. We were weak because we were distrusting, polarized, and frustrated. Trump's rhetorical strategies sought to make all of those negative things worse and he has succeeded. We are even more distrusting, polarized, and frustrated now than we were then. Our democracy is in crisis and will continue to be in crisis until we learn to trust one another, our government, and our media again. Our media environment is dominated by outrage, which means that the political extremes control our political discourse.

The nation is rightfully frustrated that political problems are not being solved, that it's harder to get by or get ahead, and that government is not serving the best interests of the most people. These are big systemic problems--some of which average people can address and others of which they cannot. We may need something like a truth and reconciliation commission to address some of this, distrust is so bad.

But, if I were going to give a list of what average folks could do I would say: get out of your information confirming media bubble; don't consume or spread propaganda, conspiracy, and outrage; have real conversations with people who think differently than you do; stay engaged in the political process; volunteer your time in your community; work with communal organizations; learn to trust, be open minded, compromise, and keep a sense of humor; and, vote.

Vote for people who believe in democracy and the democratic process and who want to hold themselves and their government accountable for their words and actions.

A: I'm working on a new book project about our broken public sphere and how to fix it. It's tentatively entitled We, The Propagandists.

A: I think it's easy to dismiss Trump and I think that a lot of people think that they already know everything there is to know about him and his rhetoric (after all, we've all been studying him for five years already), but I hope that my book will be useful to give folks a vocabulary to use to understand his rhetorical strategies, why he uses them, and why they work for him.