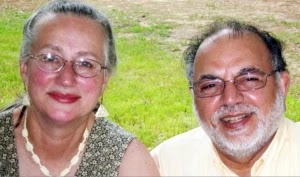 Mohammad Yadegari is the author, with Priscilla Yadegari, of the new book Always an Immigrant: A Cultural Memoir. Born in Iraq to an Iranian family, he has lived in the United States for 55 years. He is a retired educator who now resides in Guilderland, New York.

Q: Why did you decide to write Always an Immigrant, and how long did it take you to complete it?

A: While teaching Middle East history and culture in college, I used to intersperse some relevant stories of life in Iraq and Iran. My college students were intrigued with how different, yet similar, people around the world are. They suggested many times that I publish those stories. As I began to write, I realized that what I had written could become a memoir.

It took me many years to satisfactorily finish the book but I didn’t write regularly. I would wake up early in the morning with an idea and I would write a short recollection. Another early morning I would write more. I wrote these stories in no particular order.

My wife, Priscilla, offered feedback and edited each as it was written. After accumulating more than two-dozen tales we saw the possibility of forming a book worth publishing. Priscilla spent a great deal of time arranging them in chronological order.

As we read and re-read, we realized that there were gaps in time and there was much extraneous material. We removed unnecessary passages and filled the gaps with new material. At that time, we called the manuscript Vignettes. 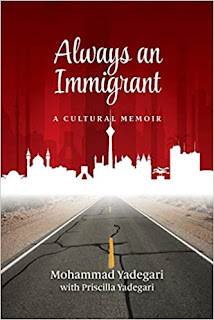 In 2017, we attended the Write Angles Conference and met Joan Axelrod-Contrada, the managing editor of Write Angles Journal, who published several of my stories as flash memoirs in the Journal, and she agreed to read and edit my book. Thus, the next two years of further rewrite and editing began. We can safely say that the book underwent at least 20 drafts. The whole process took about 10 years.

As the final copy edit approached, months before publication, it occurred to me that by virtue of being born as an immigrant in Iraq, spending four years in Iran where I was considered an outsider, traveling through Europe as a foreign tourist, and finally coming to America as a foreign student and as an immigrant, the most appropriate title for the book would be Always an Immigrant.

After all, even today, 55 years after arriving in America, people still ask, “Where are you from?” Since the book is not simply a story but a reflection of the cultures I passed through, I added A Cultural Memoir as a subtitle.

Q: You divide the book into three sections. How did you figure out the right structure for your memoir?

A: The structure developed along with the memoir. The initial vignettes became part I (my early years in Iraq). The years in America became part III and most of part II was written last as transitional material.

Q: Given the particular focus on immigration in recent years, what do you hope readers take away from your book?

A: I hope that some Americans who often consider themselves “better” than the Other realize that the most important factor distinguishing between people is in the level of their knowledge. History shows that in politics, polemics, wars, and many other occasions the smart, clever, and more knowledgeable people succeed over the mightiest opponents.

The story of David and Goliath in reality is the story of cleverness and skill versus colossal power. Those who oppose admitting immigrants into this country must remember that America was built upon the shoulders of immigrants.

Police brutality against the people of color is a sign of fear. Racist tendencies are, indeed, signs of cowardice. Even though such brutalities may exist in other countries, the world expects America to be an exception to such arrogant actions.

A: For the moment, we are promoting the book by speaking to book clubs, doing podcasts, and sending press releases. For the future, I am toying with the idea of writing about my experiences with the political intrigues I encountered as the president of Ravena Coeymans Selkirk Teachers Union (1995-2000).

A: The book has several themes often visited throughout. The discussion of these themes is presented in the form of childhood stories deliberately avoiding a didactic or pedantic presentation. The themes of veiling and seclusion of women, the concept of the Messiah, and prejudice emerge again and again.

The book can be read on different levels. It is written in a simple, very readable, conversational style that will be appealing to many readers. For some readers it is a story of a young boy who always questions what his elders tell him and who has a dream of going to America where everything is “idyllic.”

For those interested in learning about the Middle East and the root causes of some of today’s problems there, it can be read with that in mind while enjoying a compelling story.

Lastly, for those interested in social activism, it describes many subtle instances of racism that people often overlook as normal.