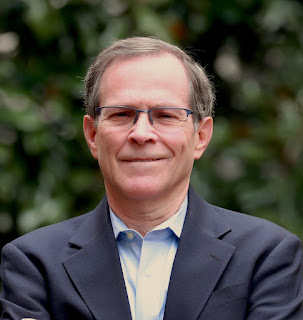 David E. Lowe is the author of the book Touched with Fire: Morris B. Abram and the Battle against Racial and Religious Discrimination. He worked for the National Endowment for Democracy and the Anti-Defamation League, and is a Washington, D.C.-based consultant for nonprofits.

Q: You write, "I can't believe how many people never heard of Morris Abram." Why did you decide to write a book about him?

A: The quotation is from a partner in Abram’s law firm in Atlanta during the 1950s who sadly died shortly after I interviewed him.

Abram grew up in a small, rural town in South Central Georgia during the height of Jim Crow segregation. His was one of 12 Jewish families in the town.

Yet he rose to become one of the leading civil rights lawyers in the country and the chairman of the Presidents Conference of Major American Jewish Organizations. He led the campaign to end his native state’s racially motivated voting system that resulted in the U.S. Supreme Court’s establishment of the “One person, one vote” principle. It would be hard to argue that this is not a remarkable story.

A: My research combined documentary evidence from his voluminous papers at Emory University and his extensive writings and speeches with one-on-one interviews with people who knew him at various stages of his life.

That list includes former law partners in Atlanta and New York;  civil rights activists such as Vernon Jordan and the late John Lewis; past and present Jewish communal leaders; current and former members of the Brandeis University administration and faculty who recall his brief tenure as its second president; and those who worked with him in Geneva, Switzerland during the final decade of his life, when he served as US Representative to the European Office of the United Nations and after he founded UN Watch. 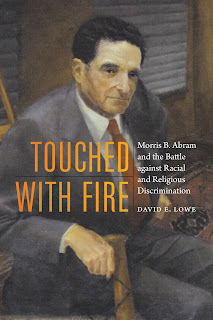 What I found surprising was how close he came to dying from AML, which arrived just after his 55th birthday. So much that he achieved, particularly with respect to Soviet Jewry, international human rights more broadly, and defense of the state of Israel at the United Nations came after he was declared cancer-free.

A: When I started writing the book, I looked to the writings of Abram’s legal hero, Justice Oliver Wendell Holmes, Jr., for inspiration. Holmes had fought for the Union during the Civil War during which he almost lost his life.

On the 19th anniversary of the end of the war he delivered an eloquent Memorial Day oration in which he paid tribute to all who fought in that war on both sides. It was this generation, he proclaimed, whose hearts were “touched with fire” in their youth and who learned early in life that “life is a profound and passionate thing.”

This seemed particularly appropriate for Abram. In fact, a number of those I interviewed pointed to his great passion for achievement and indeed for life itself.

Q: What do you think Morris Abram would make of today's politics and the current situation regarding racial and religious discrimination?

A: Abram, who crossed the political aisle in 1980 to support Ronald Reagan, always thought of himself as a liberal in the traditional sense of that term: one who believed deeply in civil discourse, in a vigorous defense of free speech, and in a fervent respect for the rule of law, the latter of which he argued is the key to holding our diverse country together.

Certainly, he would be appalled to see those values diminished as they are today. And he would be deeply disappointed to see his dream of a color-blind society, one he shared with his friend Martin Luther King, Jr. weakened by identity politics.

A: I am researching the remarkable life of Melvin J. Lasky, the American-born  founder of the Congress for Cultural Freedom, for a biography I will be writing in collaboration with a former colleague at the National Endowment for Democracy. Like Abram, Lasky believed strongly in fighting to uphold traditional Western values of freedom, democracy, and the rule of law.

A: At Abram’s funeral on Cape Cod in March 2000, his daughter Ann talked about her father’s insatiable intellectual curiosity. His son Joshua said that until the day he died, Abram woke up wondering what he could learn that day.

It was this thirst for learning that led him from his humble origins in a small, rural community in the deep South to comfortable interaction with presidents, prime ministers, and even Pope Paul VI, whom he lobbied to eliminate anti-Semitism from the Church’s teachings.

What struck me in my interviews was how many of those who knew him best were most impressed by his ability to listen to, think carefully about, and engage with the ideas of others, even when they expressed viewpoints with which he disagreed. A nice lesson for all of us.

--Interview with Deborah Kalb. David E. Lowe will be participating in a virtual talk with the Bender JCC of Greater Washington on Sept. 30 at 5pm Eastern. Here's the link for more information. The talk is part of the Lessans Family Literary Series.