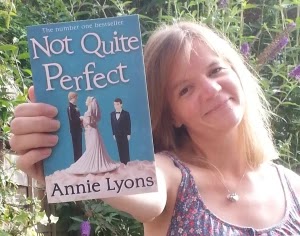 Annie Lyons is the author of the new novel The Brilliant Life of Eudora Honeysett. Her other books include The Choir on Hope Street and The Happiness List. She's based in London.

Q: How did you come up with the idea for your new novel, and for your character Eudora?

A: I have always had a mild to serious obsession with death. It probably stems from my own fear of dying and firm belief that the best way to deal with your fears is to talk them through (or in my case, write a book about them). Of course contemplating your mortality isn’t new for writers but everyone’s view of it is personal and different.

The reality of death started to hit me properly as I in turn, hit middle age. It hadn’t actually occurred to me before that middle age meant you were effectively halfway through your life. How to deal with such a momentous thing? It probably won’t surprise you to learn that I turned to books.

As I started to read and peel back the layers of this thorniest of subjects, I was struck by the fact that we spend a lot of time denying death. We just don’t like to talk about it.

I understand. Really, I do. It’s hard contemplating the end of life but I have a sneaking suspicion that it wouldn’t be so overwhelming and devastating if we did; if perhaps we could accept that dying is as much a part of life as being born.

Furthermore, because we don’t talk about death, we never discuss how we would like the ending to our lives to be and in doing so, we often miss an opportunity to leave the world with dignity and peace. As the idea formed in my mind, it became immediately clear that I would need a very special protagonist to carry this weighty topic. 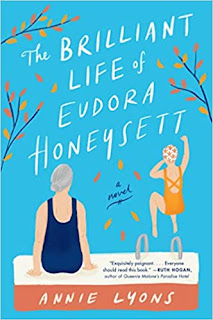 Luckily, I had a huge source of inspiration in the form of my own mum. She was a different character to Eudora but very much cut from the same cloth having grown up during the Second World War.

I have always been struck by how much fortitude and resilience people of this generation show. This was fundamental for Eudora’s character – she is stoic to the point of stubbornness but most importantly, death doesn’t faze her. This meant that I could tackle the subject head on.

I also relished writing about a strong elderly character because I feel that there aren’t enough of these in contemporary fiction.

A: I did a lot of research about death and dying and read many books, articles and watched films on the subject.

I think the most surprising part for me was how dark the world gets when you start to research assisted dying. It’s still hugely taboo, particularly in the UK where it’s illegal. There is a definite reluctance from people to discuss the idea of someone from the UK travelling abroad to end their life because the act of assisting people in this can result in prosecution. 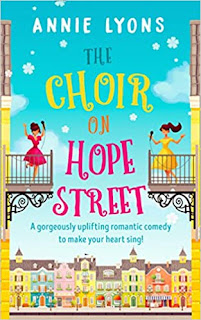 I ended up contacting an organisation in Switzerland called lifecircle who were very helpful but even they have had legal proceedings brought against them.

I understand that this issue is hugely complex and nuanced but I believe that we at least need to have conversations about a human being’s right to a good death. People are reluctant to discuss something they fear but I believe that the only way to diminish that fear is to be open and honest.

A: I wrote a different ending in the synopsis but as I started to write, it quickly became very clear which way I needed to go. I actually wrote the final ending when I was about halfway through the first draft and it hasn’t changed much from that version. It was very reassuring to know where I was heading!

Q: What do you think the novel says about how people approach the idea of death?

A: It explores our denial and inability to face death as a reality. However, through Eudora’s honesty and Rose’s curiosity, it also shows different ways to view death – whether it’s through Eudora’s discussions with Petra at the clinic in Switzerland or Hannah, the death doula’s talk on what it is to have a good death or Rose’s enthusiasm for the Mexican Day of the Dead. 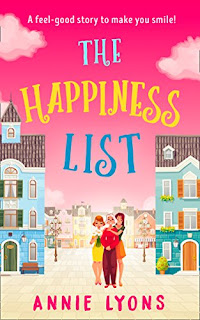 People are starting to have these kinds of conversations and I hope the novel stimulates more. If we all talked to our loved ones about how we would like the end of our lives to be, I feel sure that we could enable more people to have “good deaths.”

A: Another novel with an octogenarian in the driving seat! I am writing the story of Eudora’s dear friend, Stanley, and his life as he comes to terms with dementia. It’s a subject which is close to my heart as both my father and mother-in-law were diagnosed with it.

I’m writing this because I want people to understand that your life isn’t over if you have dementia. I’m enjoying being back with Stanley and Rose and researching more World War II stories as I revisit Stanley’s childhood with him.

A: I always love to hear from readers so please drop me a line and let me know what you think of Eudora’s story either via Twitter (@1AnnieLyons) or Facebook (www.facebook.com/annielyonswriter).

Thank you to Deborah for hosting me today.