Madelyn Rosenberg and Wendy Wan-Long Shang are the authors of Not Your All-American Girl, a new middle grade novel for kids. It features the same characters as their previous novel together, This Is Just a Test. They each have written other books separately, and they both live in Virginia.

Q: Did you know when you were writing This Is Just a Test that you’d return to the Horowitz family again, this time focusing on David’s sister Lauren?

WS: No, we had no idea we'd be returning to the Horowitz family! Test was part of a two-book deal, and we had pitched some other idea that didn't take. When we came up with a storyline involving Lauren, we had to go back to see what details we'd left behind.

MR: We’d left a lot of them, thank goodness. And Lauren seemed absolutely ready for her own story. She collected buttons, so it made sense she’d start making them and selling them. She sang, and it made sense that she’d want to go on and make her own mark.

Q: Lauren's story takes place in the '80s--how do you see the book's themes of identity resonating today? 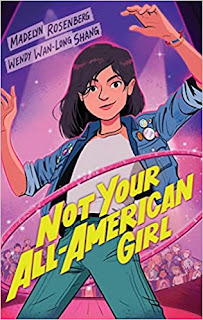 WS: Oof - the big one is the rise of anti-Asian violence and ‘othering.’ We reference the death of Vincent Chin in the book, though at the time we had no way of knowing how relevant it would be in 2020.

MR: I think identity is always an issue in middle-grade novels, because in middle-grade life, kids are trying to figure out who they are and explore all parts of their identity. How others see them unfortunately plays into that.

When we were writing the book, it was right after Charlottesville happened, and Wendy had to hold me back from being completely didactic. My inclination was to write a book that said: Anti-semitism is bad. Racism is bad. But “othering” still worked its way into what we were writing, hopefully organically. The good news is that many people seem to be willing to do the hard work of exploring these issues.

Q: Was your writing process similar this time around, or were there some differences in how you collaborated?

MR: It was fairly similar in that we took turns writing, with lots of overlaps. One person writes. The next person edits and writes some more. In that way, the story inches along.

WS: For me, the most memorable moment in the writing process was coming up with the musical. We had been trying to reference, without actually quoting, an existing musical, but it just wasn’t working. Once we decided to come with our own musical featuring the emergence of hula hoops in America, we were off to the races! I truly believe that a hula hoop-based musical could be an actual thing.

Q: What role do you see music playing in the story? 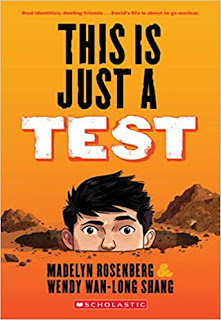 WS: Music plays such a huge role in this book! Music expresses joy and sorrow, brings people together, and creates great questions.

MR: And it moves the plot along, too.

WS: I’m working on a middle-grade novel (I know, surprise!), and I have my first picture book coming out in 2021.

MR: I just finished up my first sci-fi middle grade, which comes out in 2021 as well. I’m working on another picture book and I hope to work with Wendy on a project to be named later.

WS: This book describes what happens between two friends when issues of racism begin to drive them apart, due to both external and internal forces.

Lauren, who is Chinese and Jewish, should have gotten the lead role in the musical, but Tara gets the role because Lauren does not look "all-American." Then Tara commits a series of microaggressions, which leaves Lauren unsure how to deal. Should she say something, or keep her mouth shut?

As Wendy mentioned earlier, anti-Asian sentiment emerged this year in a way that we hadn’t expected, and I’m glad we got to explore that subject, shining light on what it means to American and on what it means to have more than one identity. Lauren spends a lot of time pondering her Chinese side, but Jewish themes such as exploring identity, questioning, and choosing a friend are also present.

Oh, and you should also know that Patsy Cline is from Virginia! (So am I, so is Wendy, and so is this story.)