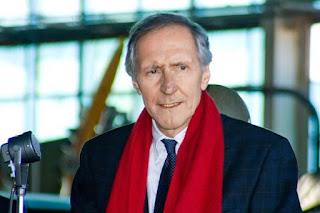 Robert J. Mrazek is the author of the new book The Indomitable Florence Finch: The Untold Story of a War Widow Turned Resistance Fighter and Savior of American POWs. His other books include Stonewall's Gold and Unholy Fire. A former member of Congress, he lives in Upstate New York and Maine.

Q: How did you learn about Florence Finch, and at what point did you decide to write a book about her?

A: Learning about her story was entirely serendipitous. I was meeting a friend in New York City named Fred Roos, who produced the Coppola film Apocalypse Now and all the Coppola films since. He handed me the New York Times obituary page and there was the very long obituary of Florence, who had just died at 101.

Fred was very interested in the Philippines because he spent two years there making Apocalypse. What an incredible woman, he said to me, and he was right. When I contacted Florence’s daughter, it turned out that her brother had read another of my World War II nonfiction books and he told her that if I could tell her life with the same sensitivity I wrote that one, I was the person to write the book. 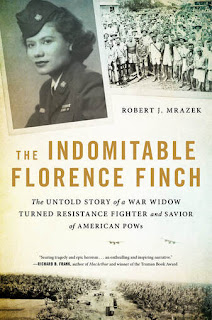 A: I became the beneficiary of the “Florence archives,” with hundreds of her pre and post-World War II letters that allowed me to gain a lot of insight into who she was as a young woman and who she became during the war. After the war, she corresponded regularly with the other principal individual in the book, Carl Engelhart, whose life she saved along with many other prisoners of war.

Those letters provided valuable information about how she was able to divert tons of fuel to the Philippine underground, selling much of it to buy food and medicine for the American POWs.

The most startling piece of research that shed light on the story consisted of 80 pages of court records dealing with the legal battle over Florence’s father’s estate. These revealed the traumatic events that blighted her early years.

A: Her legacy is one that in a world today where so many people are driven to become self-aggrandizing, famous “celebrities,” it’s refreshing to be reminded of the level of humility Florence embraced throughout her life. She was an extremely positive person and always looked forward, rather than dwelling on the past.

She never viewed what she did in saving so many lives as heroic. She felt the people she served with in the underground who were killed by the Japanese were the true heroes and heroines.

A: I hope this book will be inspirational for a modern generation of Americans, particularly young women, who will learn how a brave and resourceful woman could achieve extraordinary things in a world war then dominated by men.

There have been tens of thousands of books about courageous men in war, and we are only now finding out the important role women played in so many aspects of achieving victory against fascism in World War II.

A: The world we are currently living in bears little resemblance to everything that has come before, at least in my 74 years. It’s my hope to choose a worthy subject that reinforces the values of honor, courage, and sacrifice to help build a better world.