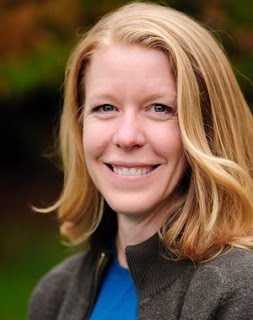 Sarah Jane Marsh is the author of the new children's picture book Most Wanted: The Revolutionary Partnership of John Hancock and Samuel Adams. She also has written the book Thomas Paine and the Dangerous Word. She lives in the Seattle area.

Q: Why did you decide to focus on the partnership between John Hancock and Samuel Adams in your new book?

A: For over 10 years, John Hancock and Samuel Adams worked together behind the scenes of key events that ignited the American Revolution.

Although Paul Revere’s midnight ride has become famous, it’s less known that his actual destination was to warn Hancock and Adams. The two men had caused so much trouble for the royal government that after the bloodshed in Lexington and Concord, British General Thomas Gage issued a pardon for all colonists except John Hancock and Samuel Adams — literally calling them out by name.

I couldn’t resist telling the story of origins of the American Revolution as seen through these two troublemakers.

Q: How would you describe the dynamic between the two?

A: Although they didn’t always get along, the political partnership of John Hancock and Samuel Adams is legendary. They are the American Revolution’s odd couple and a delightful study in contrasts.

Hancock was rich and vain (and threw great parties) so he added an influx of cash and a celebrity factor to the patriot cause. Adams was older, wiser, and a respected voice in politics. Together they made a powerful pair. 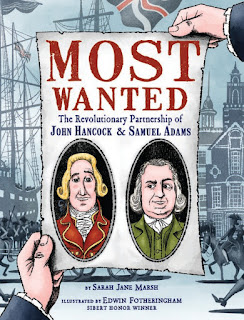 At times, Adams had to sway Hancock away from rash decisions or soothe his ego to keep him moving in the right direction. A popular saying was “Samuel Adams writes the letters and John Hancock pays the postage.” The two men were still working together when Hancock died in 1793. Hancock was serving as governor of Massachusetts with Samuel Adams as lieutenant governor.

A: This project required an immense amount of research into the individual lives of both men as well as the historical events and context of the time. We cover ten years of revered history, so it was important for me to separate fact from myth.

I always use both primary and secondary sources in my research.

A favorite example of a primary source is Hancock’s letterbook, written in his beautiful handwriting and digitally preserved online by Harvard Baker Library. I used this to confirm his actual quotes. For secondary sources, I read many books and journal articles, but historian J.L. Bell’s daily blog Boston 1775 provided an invaluable deep dive into the people and events of the time.

I was surprised to learn that Samuel Adams at the time was more famous than his cousin John Adams. When John Adams traveled to France in 1779 to seek French assistance in the war, he was repeatedly asked if he was “the famous Adams?” Politely, he would explain they were thinking of “Mr. Samuel Adams, who was excepted from Pardon by Gen. Gage's Proclamation.”

To his embarrassment, it became clear that John Adams was ”not the famous Adams” but rather “some man that nobody had ever heard of before — and therefore a man of no consequence.” Poor John Adams. However, he has had the last laugh. He is now considered the more famous of the two Adams cousins. 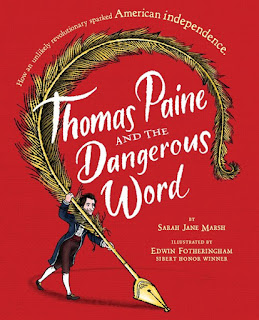 A: Edwin Fotheringham also illustrated my previous book, Thomas Paine and the Dangerous Word. I love his trademark warmth and wit. He created an image of Hancock on a getaway sailing vacation where Hancock is perched on the bow, a la Leonardo DiCaprio in Titanic. What a hoot!

But most impressive is Ed’s level of historical detail. He crafted stunning scenes to give us a sense of the power of “the people,” like the 5,000 Bostonians who gathered at Old South Meeting House on the evening before the Boston Tea Party. He even recreated the exact markings on the tea crates.

The book is a treasure hunt for history fans. Prince Estabrook, Phyllis Wheatley, Boston’s Old State House, the famous Copley portraits of Hancock and Adams — and more — all make an appearance in this book.

A: We are in a time of political and social upheaval, and as a result I’m reflecting on my role as a storyteller of history for children.

What does it mean when we say America was founded on the idea that all men are created equal? Where have we fallen short in that reality today? I’m experimenting with another picture book that tackles these issues. I can’t tell if it’s brilliant or terrible, but I’m enjoying the creative challenge!

A: This is a wild time to be discussing American history. We are seeing a battle over the narrative of America: who we are, how we came to be, who is included and who is excluded. It’s easy to view the events of the past as preordained and inevitable, but we are living history as it unfolds messily before our eyes.

The future is not certain. It is up to us to be active participants in our democracy and not take it for granted. “We the People” have a lot of work to do!