Kelly Leigh Miller is the author and illustrator of the new children's picture book Stella, Star Explorer. Her other books include I Love My Fangs!. She lives in Chicago.

Q: What inspired you to create your character Stella?

A: During the pandemic, I was missing traveling and visiting home since I don't live in the same state I grew up in.

When I was younger, I always wanted to explore other places and was often lost in my imagination. I wanted to take those feelings and mix it with my love of space, since I always found space interesting as a kid. My favorite planet was always Saturn! I loved the rings.

Q: How would you describe the dynamic between Stella and her new friend Io?

A: Stella and Io are sort of inspired by when I take someone around who isn't used to where I grew up and show them all the cool things, whether it's my husband or a friend.

There's a lot of things that you sort of take for granted as being experiences everyone else must have when in reality that might not be the case. It's kind of fun to show people around! 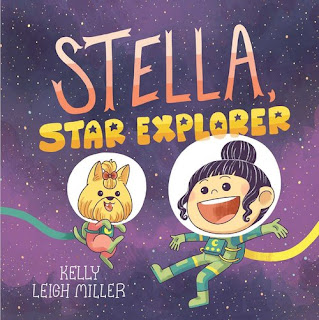 On the flip side, it's also fun to be Io and try out all kinds of new experiences! I feel like we are often both Stella and Io in life.

Q: How did you create the illustrations for this book?

A: I created them like how I do most of my illustrations! I usually draw the initial sketches on my iPad with procreate since I like to write and draw in different places if I can.

I usually write and draw at the same time nowadays so the illustrations and words go hand in hand. Then when it comes time to do the final artwork, I sit down at my desk and clean up the sketch in photoshop. I use my wacom tablet to draw the rest in photoshop!

A: Sometimes you need to see things from a different perspective to truly appreciate what's around you. Also some space facts!

A: I can't talk about what I'm working on exactly yet unfortunately, but I can tell you it's a new story AND it's a new format! You can take some guesses from that, but I can't confirm anything. I can't wait until we make the announcement though!

A: I have an Avatar the Last Airbender early reader comic coming out next year in January! It's called Aang's Unfreezing Day and it's published by Dark Horse. I'm the writer and Diana Sim is the illustrator. Her work is so adorable!