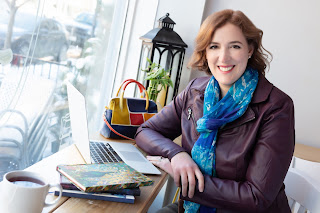 K.B. Jensen is the author of the new story collection Love and Other Monsters in the Dark. Her other books include A Storm of Stories. She lives in Littleton, Colorado.

Q: Over how long a period did you write the stories in Love and Other Monsters in the Dark?

A: It has been a long journey assembling this collection with the threads of love and horror. I’d say over half of Love and Other Monsters in the Dark was written during the pandemic, and this is when the theme found its shape. A ton of revision happened during this time.

Some first drafts of the stories go back well into the before times. I wrote a first draft of “The Hoarder” about 10 years ago at a writer’s circle at an old mansion taken over by artists in Chicago.

“Grandma,” which won an award around the time I moved to Denver, well, the first draft was written eight years ago at class, and during a time when Ebola was all over the news, hence the reference to Ebola.

“Paper Dolls” is the oldest story in the collection and was actually written when I was in my late 20s, I believe. It was a time when I was so tired of being objectified that I actually looked forward to becoming less attractive. I had to do some updating to that story as my writing style has evolved.

Some stories were written in sessions with Indie City Writers, a writing collective on the South Side of Chicago I formed before I moved to Denver. It was my unofficial build-your-own MFA writing workshop with prompts, live-lit readings, author talks and critiquing.

I also wrote some stories during an amazing flash fiction writing retreat in Casperia, Italy, with flash fiction queens Nancy Stohlman and Kathy Fish. If I had a spark for flash fiction before hanging out with them, they doused it with gasoline. I also enjoyed revising and reading my stories at Denver’s infamous F-bomb readings.

I’m not a fast writer by any means, and I like stories to ferment.

A: Some of the stories felt natural on placement. The opening story, “A Siren in Stone,” was all about excavation and discovery. I felt that it was a good metaphor for what was going on with me as a writer. It was the perfect starting point because of the things you find in your own stories. The whole book is an excavation of my subconscious mind.

I tried to balance the light and the dark, the long and the short throughout. I didn’t want a lopsided book, but as you get to toward the end, there are more pandemic stories.

The last story, “Arnav and the Apocalypse,” seemed like a natural fit for the ending. It’s kind of a crescendo, a grand finale. 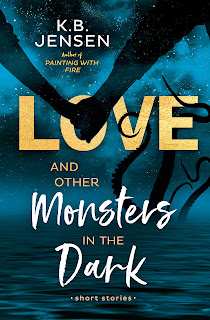 A: I had the working title for several years. At first it was Love and Other Monsters, a title I loved and felt so natural given the mix of horror and relationships, but then that movie Love and Monsters came out and I was like what now?

I also looked at Amazon and realized it would be buried with that title so for the purpose of good SEO [search engine optimization], I opted for Love and Other Monsters in the Dark. I actually like the title better than the original. Because love and monsters are both with you in the dark.

Nowhere on my back blurb does it say: this book has characters experiencing depression, grief, or mania, and not all of them have that experience, but some do. I didn’t want to be sidelined or marginalized.

My intention was that this is subtle, not something that’s hammered in.

A: The funny thing is I wouldn’t be surprised if I’ve already started my next project but I haven’t realized it yet officially. Now is a time for exploration and dabbling.

I tend to struggle with commitment issues when it comes to new projects, but poetry has been calling me lately. I feel like my writing just gets shorter and shorter. I started a paranormal novel, but the characters aren’t speaking to me right now.

I also have been playing with short memoir style pieces. I’d like to write more about my life but I also feel like I have to live more of it to do so.

Like some of my characters, I’ve had some mental health challenges and I’d love to write more about that, but it’s one chapter of my life and a little thread that streaks through my story. It’s not who I am. It doesn’t define me. I feel like poetry might be the best language to tell that story, but it may take me a moment to commit to it.

A: I have two other books out, Painting With Fire, a crime novel, and A Storm of Stories, which veers literary and handles love, craziness, and impossibility, as well.

You may also notice two other books under my umbrella on Amazon, juvenile fiction anthologies written by the kids in the online summer camp program I run with my colleagues at My Word Publishing.

It’s an honor to work with these diehard, serious writers. Their first book, A Thousand Feelings, won first place in the Colorado Independent Publishers Association Evvy Awards for juvenile fiction. The second book, Other Realities, is critically acclaimed too.

My daughter, also a writer, is part of the program and why I started it. We were inspired to help kids publish when summer camps were cancelled in 2020. When times are hard, turn to art.