Q&A with Susan B. Katz 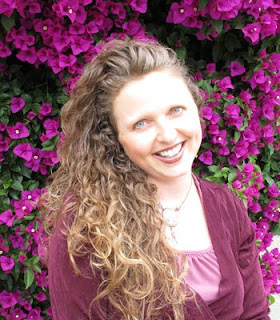 Susan B. Katz is the author of the new picture book biography Gaudí: Architect of Imagination. Her many other books include Meditation Station. She is also an educator and artist.

Q: Why did you decide to focus on Gaudí in your new picture book?

A: I taught in Spain in the mid-‘90s. Frequent visits to Barcelona made me a huge fan of Gaudí’s mosaic work. I fell in love with the tile work, colorful patterns, and undulated teacup benches in Parque Güell.

After taking a ceramics class while I lived in Spain (with my friend Amparo to whom the book is dedicated), a box full of handmade pieces broke in my move back to San Francisco. I figured, why not try my hand at mosaics?

So, I took a class and then began teaching mosaic classes to adults and children. I even started a mosaic business, selling mosaic frames, tables, and mailboxes at the local farmer’s market.

I’ve gone back to Spain many times since I lived there. I always visit Gaudí’s park, overlooking Barcelona, and his other landmark houses with tiled façades. Gaudí was ahead of his time and I admire his use of color and shape—everything from broken dishes to the bottoms of glass bottles. His vision and out-of-the-box thinking inspire me as an artist and writer.

Q: What do you think Linda Schwalbe's illustrations add to the book?

A: Linda’s palette, composition, and almost surrealist viewpoint bring this book to the next level. I love the way she uses perspective and color to draw the reader’s eye in. She was the perfect choice to illustrate this book with a bold palette and strong depictions of the amazing architectural masterpieces Gaudí designed and built.

As a former educator, I know that the cover and interior artwork is what initially draws a child into the book. Linda definitely created an eye-popping, engaging book that complements Gaudí’s story in every way possible.

Q: How did you research Gaudí's life, and did you learn anything that especially surprised you?

A: Having lived in Spain and gone back many times helped a lot. I got to immerse myself in his creations and literally feel his style and craftsmanship. I also did research and read up about his life and process. 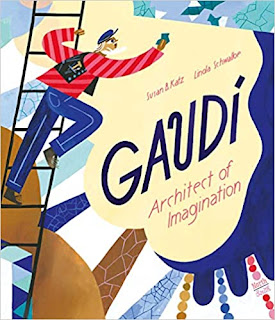 Several things surprised me: 1) He experienced a lot of sadness in his life. Several family members and his mentor died, around the same time, and he also got really sick with Maltese Fever and almost died, himself. Still, his works of art are so bright and uplifting—not at all reflective of his often depressive state.

2) There are several buildings in Barcelona that look like Gaudí’s work, but are actually by people who were inspired by him or who inspired him. For example, the Palau de la Música has mosaic pillars that one would assume were Gaudí’s art nouveau creations, but are actually by his contemporary, Lluís Domènech i Montaner.

3) When Gaudí was struck by the cable car and killed, he was dressed like a pauper. People didn’t recognize him as the artist icon and genius at first—until they did, and then everyone jumped in to help.

Q: What do you see as Gaudí's legacy today?

A: The entire city of Barcelona is like an open-air Gaudí museum. If you’ve been, you know that there are houses, parks, and cathedrals dotting the city with Gaudí’s brilliance. His work is almost synonymous with the city itself and, some might say, with Spain.

For modern-day artists, I think Gaudí is a testament and a call-to-action to be innovative and cutting edge. In his lifetime, many people questioned his artwork as eccentric, but Gaudí wasn’t afraid to be ahead of his time and create pieces like nobody had before him.

He was a true artist with vision and the willingness to take extreme risks to bring it to life. The ancient art of mosaic making dates back to Roman and Greek times—but Gaudí put a modern twist on square tesserae and tiles, by smashing round, found porcelain plates and empty sea-glass colored bottles.

A: Several projects simultaneously: 1) I am writing the first two books in a new STEM-early chapter book series, since my academic background is in environmental studies.

2) Against my squeamish side, I’m writing a three-book scary stories series.

3) I’ve also partnered with a well-known, local artist and am writing some books that pair perfectly with her colorful artwork. She passed on a few years ago, but her daughter is in charge of her brand and we are collaborating on these books. I’ve been a fan of her mom’s work for 30 years, so bringing her art to life through children’s books is a true honor.

A: Aspiring writers: have patience and keep “pounding the pavement.” For years, I went to writer’s conferences, flew to mecca (NYC) to pitch my work to editors, and even went to Bologna twice (twist my arm, I know!)

There was a tipping point at which I started to get more requests to write. In 2020, I had eight titles come out. In 2021, 16 of my books were published—some direct-to-school market, and some traditional trade.

As of May 2022, I now have over 40 books out and many more scheduled for publication. It takes a while to break into the industry but, once you do, editors want to see what ideas and manuscripts you have and they (sometimes) come to you with requests to write certain projects.

Still, I am trying to “break in” to illustrating children’s books with my mosaics and/or with my wildlife photography: www.behance.net/susanbkatz www.SusanKatzBooks.com

--Interview with Deborah Kalb. Here's a previous Q&A with Susan B. Katz.