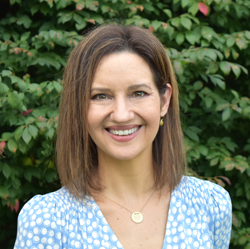 Terri Libenson is the author of Remarkably Ruby, the latest in her Emmie & Friends middle grade graphic novel series, which began with Invisible Emmie. She lives in Cleveland.

A: Young readers often send me suggestions for main characters. In the past few years, I’ve had many requests for Ruby, aka Baked Bean Girl. That’s how I knew she deserved her own story. Additionally, I like to create a “secondary” main character who appears to be opposite in nature, so that’s how I came up with Mia.

Ruby is so quirky and socially awkward; I love how her personality butts against Mia’s, who is very organized and type A, like myself (scary). 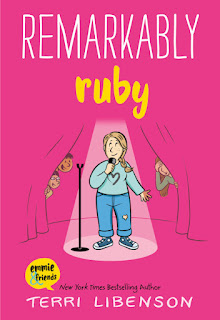 Q: How would you describe the dynamic between the two girls, and why did you decide to have Mia be a grade ahead of Ruby in school?

A: There’s a lot of tension between the two. They are ex-pals; one has moved on from the relationship while the other hasn’t. There’s a reason I decided to have Mia be a grade ahead of Ruby, but revealing it would be a spoiler!

Q: You provide cameo appearances for the main characters in your previous books--do you plan that out, or do they just appear as you're working?

A: It’s often both. I like to have cameos for the sake of continuity in the series, but often they appear just for fun.

Sometimes I’ll think of a situation that suits a certain character’s personality; for instance, Joe Lungo likes to cause trouble, so sometimes he’ll float in the background in a cafeteria scene, throwing gross, drippy paper plate frisbees.

Q: How did you develop your artistic style?

A: It took a lot of practice. It really clicked for me while I was drawing my comic strip (The Pajama Diaries). That’s 14 years of continuous artistic and character development!

A: I’m working on the seventh book in the Emmie & Friends series. This is a really fun one, a little different in format from the rest.

A: You can order Ruby or any of the other books in the Emmie & Friends series here. Hope you enjoy!