Chloe Lane is the author of the new novel The Swimmers. She is the founding editor of Hue+Cry Press. She lives in Christchurch, New Zealand.

Q: What inspired you to write The Swimmers, and how did you create your character Erin?

A: Though this is a novel centered around an assisted death, I was most interested in writing a story about family. I wanted to see what it would look like for a regular New Zealand family to help take the life of one of their own—the logistics involved, the emotional toll of it—as a way to try and make sense of some of the ways we move within our family units.

Erin and I share some character traits and interests—the swimming and love of art are the biggies. Some of how she is trying to live her life, the haphazard way she is attempting to figure it all out, is familiar to me too. Especially when I think about some of the choices I made when I was in my 20s.

She is determined to go it alone, is reluctant to let others in, and letting go of this—the competitive swimmer mindset of “it’s only you standing on the starting blocks”—is what allows her to begin making room in her heart and life for Aunty Wynn, Bethany, and Uncle Cliff.

Q: The writer Fiona Kidman said of the book, “This account of a mother and daughter’s last days together...made me weep in places. And yet, Chloe Lane offers gifts of laughter, turning a mood from intensity to outright and sometimes outrageous comedy with quick and subtle shifts of tone.” What do you think of that description, and what did you see as the right blend between seriousness and humor in the book?

A: I was incredibly flattered to read Fiona Kidman’s extremely generous review of the book. She is a writer I have admired for a long time—it meant the world to me that she read the novel and enjoyed it so much. 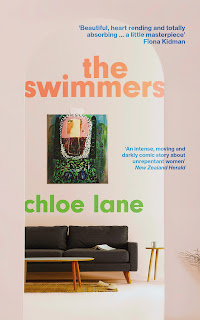 I always find it interesting to learn what other people find funny though. Some of the moments in the book that I think are funniest, often the ones I worked hardest at to be funny, are rarely mentioned.

Some of my favourite “comic” writers are also the ones who know how to break my heart the hardest—Donald Barthelme, Joy Williams are at the top of this list. Which I guess is my way of saying that always the ideal, no matter how heavy the subject matter, is to be able to do both.

In my personal experience some of the worst life moments, the real heavy ones, are also shot through with humor, levity. It’s a coping mechanism. And life is pretty absurd, I think—its weirdness, funniness is inescapable, always just hovering there.

Q: How would you describe the relationships among Erin, her mother, and her aunt?

A: At the beginning of the novel Erin talks about the dynamic within the extended family as being a kind of competition—she and her mother are allies against the rest of them.

The picture she has of her place and role is quickly rocked though—suddenly her mother is on Aunty Wynn’s team too?!—and this was something I was interested in teasing out over the course of the novel. The shifting power dynamics of three headstrong women—it was fun to think about.

My favorite relationship in the novel is between Erin and Aunty Wynn. Its evolution is important to Erin’s evolution. When Erin finally gives Aunty Wynn time—actually listens to her, looks at her without her preconceptions or judgments—she is surprised by what she finds.

They each make themselves vulnerable within the new space of this relationship, and this is what gets them through—the task at the end of the story, and what I have imagined as the tough road that continues beyond the pages of the novel.

A: The moral question of assisted death isn’t addressed in the novel—that wasn’t something I was interested in exploring. So on this subject, I have no hopes. Though, interestingly, I have heard from some readers that the experience of reading the novel poked at and shifted some of their ideas about assisted death—one way or another.

As I mentioned earlier, the core story for me is one about family and the stickiness and complexity of these relationships, and how we take care of one another. One reviewer said of the book that it hung around and annoyed her with “wondering about your life and relationships, and whether you are doing a decent job of being a human.” I love this.

That’s probably the dream takeaway for me—that the story and characters get at the reader in some way and make them think about their own relationships and choices.

Also, is it okay to simply want the book to be a fun read, a fun ride?

A: My second novel is coming out in New Zealand in August. It’s called Arms & Legs and tells the story of Georgie, a New Zealand woman in her 30s living in a small university town in Florida, and the unravelling that happens in her life after she discovers the remains of a missing college student while volunteering on a prescribed burn.

At its center it’s a story about marriage and long love, and, I guess, whether happiness is really possible?

Since finishing work on that I’ve tentatively started work on a new novel—very tentatively. The new book, will, to a greater and lesser degree, include these elements: accidental death, snake hunting, and female friendship.