Clothilde Ewing is the author of the new children's picture book Stella Keeps the Sun Up. She is vice president of strategic communications at The Chicago Community Trust, and she lives in Chicago.

Q: What inspired you to write Stella Keeps the Sun Up?

A: I have two young children, who are now 6 and turning 8 in July. I have always been an avid reader. When I was pregnant, it was exciting to think about building their library. I was struck by how little there was with joyous Black characters where the book was not focused on race. There were some, but it took some hunting.

I found an op-ed by Denene Millner in The New York Times [“Black Kids Don’t Want to Read About Harriet Tubman All the Time”] that put to words what I had experienced when looking for books when I was pregnant.

I cut the article out and put it on my vision board. I realized I was going to try to write a book and move forward on this journey.

I love my kids dearly, but my husband and I have never won when it comes to sleep! Even when my son was a baby, like clockwork, the second I was feeling comfortable, that’s when he started screaming. I went through a number of different ideas. The idea of sleep is very authentic in our house!

I was writing for a while, and I did struggle with the ending. It was so important for a child to have their own agency and figure things out on their own. We have more success when they get there on their own. Perhaps the idea of letting down a friend might resonate in a different way than your parents being sleep-deprived!

Q: What do you think Lynn Gaines’s illustrations add to the story?

A: She did such an amazing job. I was not familiar with her before being partnered with her. When I saw her work, I thought, Oh yeah, this is it! When I saw the Stella galleys, I was blown away. She nailed it. 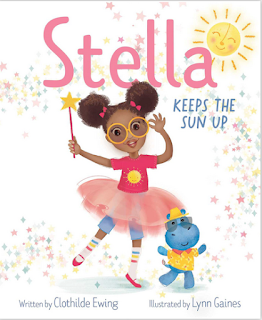 I had a general idea of what Stella looked like. A tutu and athletic socks—it’s so her! It exudes joy, imagination, fun—precisely what I was hoping for. The details on every page are incredible. She nailed it with Roger, also—the Hawaiian shirt!

Q: How would you describe the dynamic between Stella and Roger?

A: It’s interesting. I was never blessed to have an imaginary friend. A number of my friends did. They never thought of the person as imaginary. I wanted to honor that. They encourage each other, and they rile each other up. But that also provides a nice balance.

A: To lean into their imaginations. A child’s imagination is such an amazing thing. At some point in life, the spark gets dimmed a little. If they’re able to hold on to their imagination and their can-do attitude, they can figure it out. Stella and Roger think all they need to do is keep the sun up!

And I want kids to have fun with their own lives and stories.

I haven’t heard from a single parent who said their kid used the book as a way not to get sleep. It has helped!

Going back to the original inspiration, I’m really touched by the support the book’s gotten so far. I have random messages on Instagram—someone said their daughters gravitated to the book because they look like Stella. That’s great—that’s what we need more of! Or kids who look nothing like mine sent in ideas for future stories.

Q: This is the first in a series—so what’s next?

A: The second book will be out in March 2023—Stella and the Mystery of the Missing Tooth. It’s exciting!