Q: This is your second novel featuring your characters Serach Gottesman and Paloma Rodriguez--did you know that you'd be writing a sequel when you were working on Acts of Assumption?

A: I didn’t even know that I’d be writing a novel when I first started Acts of Assumption—I’d originally planned it to be no more than a short story about Serach’s little brother Shmuely, with Serach as my narrator.

It only began evolving into a novel as Serach’s own character evolved and I realized that I was as interested in her as I was in Shmuely.

And—in terms of a sequel—I thought I’d wrapped up the story very nicely once Serach and Paloma finally found one another, fell in love, and began living together. But then Shmuely’s situation began nagging at me and I added in an Epilogue that centered on him and his ongoing dilemmas.

And as reader after reader began asking me: “So what ever happened to Shmuely?” I realized that I had to write the second book.

Q: Do you think your characters have changed from one book to the next?

A: Not fundamentally. Serach is as logical and kind as ever. Paloma is as flirtatious and quick-witted and impulsive. Shmuely is as peculiar, brilliant, and stubborn. Manny—Paloma’s older brother—is as responsible and as macho.

But, of course, they are now all adults, so their challenges and priorities are different. Paloma’s and Shmuely’s underlying career ambitiousness come into high relief. Issues of social justice, marital fidelity and mental illness suddenly become relevant. And all the characters are forced to evolve. 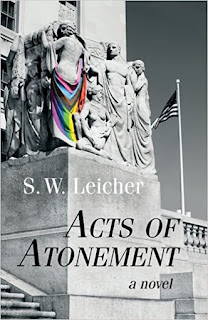 Q: How would you describe Serach's and Paloma's relationships with their families?

A: Difficult and painful. Serach has been totally alienated from her mother and sisters since her mother declared her dead for being a lesbian—and now she’s even lost Shmuely, who decides he can’t afford to be associated with her once he marries and comes into his own in the yeshiva world.

Paloma has had no relationship with her mother since that mother sent her away to Colombia as a young teenager. She is still close to her brother Manny and his three sons—they all accept her relationship with Serach and have even grown to love Serach herself—but Manny remains explosively touchy about how far his little sister has come since leaving the South Bronx behind her.

Basically, the two women have been forced to create a family comprised just of themselves. Which makes the crises that wrench them apart even more harrowing.

A: That wisdom and foolishness, bias and open-mindedness, nurturing and neglect, kindness and cruelty are not limited to any one gender or sexuality or background or upbringing. That love and faith and atonement cross all sorts of boundaries—and possess the unparalleled power to heal.

And that, given both how diverse and how interconnected we all are, it is vital to keep learning from—and learning to care about—one another.

A: I am working on a book of Torah and Haftarah commentaries in partnership with my husband. I’m mulling over some ideas for a murder mystery, and a short story about a largely ignored but marvelous Biblical figure.

I’m also toying with the idea of trying to break into the world of voiceovers so I can narrate other people’s audiobooks. I’ve rarely had as much fun as I did while narrating mine.

A: How thrilled I am that people of all backgrounds are thinking and wondering about a set of characters that once lived only in my mind. And how grateful.