Monique Polak is the author of the new middle grade novel For the Record. Her many other books include Room for One More. Also a journalist and teacher, she is based in Montreal.

Q: What inspired you to write For the Record, and how did you create your character Justine?

A: My sister Carolyn, a family law lawyer here in Montreal, was the one who told me I had to write this book. She has seen many cases of parental alienation and believes the issue needs to be more widely addressed. “You need to write about it!” she told me.

Justine has a lot of me in her — especially me when I was growing up. She believes in justice (hence her name), and she’s the kind of kid who’s always trying to fix the problems around her.

Also, she believes her vision of the world is correct, and it will be difficult for her to accept that she has become her mother’s soldier in the war against Justine’s dad.

Q: The Kirkus Review of the book calls it “Sad—but frank, supportive, and properly free of easy answers.” What do you think of that description?

A: I like it a lot — especially the “free of easy answers” part. I have found, in growing up, that most situations are complicated — that different people often have very different perspectives of the same situation — and that we can learn a lot by shifting our perspective.

I’m also glad Kirkus called the book “frank” and “supportive.” I think that as a long-time college teacher that has been my style in the classroom too — frank and supportive. I think kids needs those things from the adults in their lives. 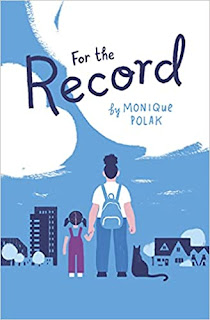 Q: How would you describe the dynamic between Justine and each of her parents?

A: For her mom,. Justine tries to be the fixer. Her mom is high-maintenance emotionally. Justine has become almost hypersensitive to her mom’s moods. In some ways, Justine has taken on an adult role with her mom, when what Justine needs is just to be a kid.

Justine loves her dad, but she is always on the lookout for his flaws. She has accepted her mom’s perspective of Justine’s dad — that he’s hapless and slightly irresponsible. In fact, that he’s a big kid.

A: This title still makes me happy. “For the record” is a legal term often used at trials when, for example, a lawyer is presenting evidence.

But of course I also meant it as an allusion to the fact that Justine is recording her father’s misdeeds in her notebook.

A: I’m working on two nonfiction books for middle graders. Both are connected to the world of science — which is an entirely new world for me.

But I happen to have fallen in love two-and-a-half years ago with a scientist. His name is Guy and he is active in the Open Science movement. So that’s the topic of one of my upcoming books.

A: That I just retired after 35 years of teaching at Marianopolis College in Montreal. But I plan to keep writing as long as I’ve got ideas. (So far, I have lots.)

Also I have my first picture book coming out in fall 2022. It’s called The Brass Charm and it will be published by Scholastic Canada. It’s illustrated by Marie Lafrance and I LOVE IT!!