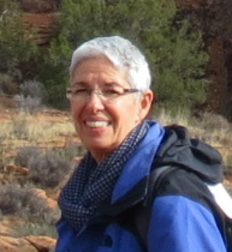 Terry Catasús Jennings is the author of the new children's picture book The Little House of Hope/La casita de esperanza. Her many other books include the Definitely Dominguita series. She lives in the Washington, D.C., area.

Q: You write, “This book was written in anger, but with pride.” Can you say more about the inspiration behind The Little House of Hope/La casita de esperanza?

A: I’m a little ashamed of this; but I was angry. A realtor friend told me that he never rented to “Mexicans” because they lived four families to a house and trashed the property. This was a friend. Someone who knew I was Cuban. And. He. Said. That. In front of me. I still remember the restaurant where it happened. I couldn’t get it out of my head.

But at first, it wasn’t about me. It was about us, as immigrants until I remembered that when I first came to the United States we lived in a house with one of my uncles.

Three families lived in the house. Sometimes there were 14 of us. And we all became citizens and all became productive members of our communities and we didn’t trash that house. And we lived together until each family was able to get their own place.

That’s when it got personal. I had to set the record straight for that realtor and so many others who might think like he did. Leaving your country for another, as an immigrant, is not something anyone does lightly. You leave family, your roots, your culture. And it is difficult. I hope I have given a window into the immigrant experience that will make a difference in readers’ lives.

Q: What do you think Raúl Colón's illustrations add to the book?

A: What can you say about such a wonderful artist? His illustrations add flavor to the story.  Honestly, I am not following a pun here, but you can almost smell the food in Mami’s kitchen in one spread.

He portrayed the immigrants with dignity. I think that is so important, so representative of the way it is. Both times, at the beginning of the book, and when the Mexican family is first seen, the colors are muted—browns. Then the palette changes to happy! (that is well-known artist palette terminology—happy!)

His characters are very expressive. When the two women are talking, when Mami meets Patricia at the diner, you can see the concern in Mami’s face, the empathy that she has for Patricia. You can see the love in the body language of Mami and Papi when they are painting. The youngest kid is so normal, slouching against his mother. 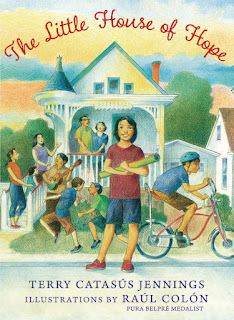 Raúl’s illustrations make the story come alive, and his colored pencil etching technique adds layers and depth. I couldn’t be happier. I think anyone who sees this book will want to open it. You can’t ask for anything more.

Q: The book was published in English and in Spanish--how did that come about?

A: Neal Porter, the editor of the book, decided that both books would come out simultaneously. And it’s a great idea, why wait? The book is equally important for English- and Spanish-speaking people.

What was extra special is that I got to translate it. My Spanish, I must confess, is the Spanish of a 12-year-old. You can imagine that my grammar is not the most stellar. But Neal gave me a translation fairy godmother, Eida del Risco, who helped me do it correctly.

Two things happened that are worth noting. The first is that the Spanish in the book has a Cuban flavor. I used words that are used in Cuba more than in other countries. For instance, I used guagua, instead of autobus for bus. And I used medias, instead of calcetines for socks. I love the more local flavor; to me that was huge.

Then there were a couple of phrases that when I translated them to Spanish, caused me to make the English version even better. So we changed the English so that the versions are both very parallel; I think I was able to pull the best from both languages.

Q: The Kirkus Review of the book says that “this book reflects the stories of many a refugee family and humanizes a group of people often othered. In an age-appropriate way, it touches on the complicated reasons people leave their homes.” What do you think of that description, and what do you hope kids take away from the story?

A: I think they got it right. That was exactly what I wanted my readers to get from the story. We are all humans, and immigrants don’t leave their homes on whims, most they have dire circumstances that force them to make the decision. And then when they get to the United States, a helping hand goes such a long way.

A: So much. There are lots of picture books in the works. Some fiction and some nonfiction. I am trying to write a problem-solving book as a companion to the Dominguita series. There are some STEM aspects to that, so I want to emphasize them. Maybe not as a real book, but at least as something teachers can use.

I just finished a work-for-hire about September 11th.  That was very interesting. I thought I knew a lot, having lived through it, but there was still more to be learned.

I am happy to say that I just finished a draft of a novel in verse about the Cuban Revolution. It’s more than the first draft, because this book has gone through many iterations in prose. Now comes the hard part of making the poems sing. But I have to say I’m enjoying that a lot and I am getting better at it.

A: Well, The Little House of Hope was just named a Junior Library Guild Gold Standard selection, so we are really ecstatic about that.

Deborah, thank you so much for hosting me on your blog. As always I love your insightful questions. It’s such a pleasure.