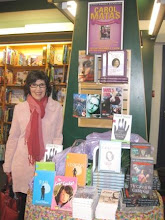 Carol Matas is the author of the new children's picture book Who's Looking?: How Animals See the World. Her many other books include A Struggle for Hope. She lives in Winnipeg.

Q: What inspired you to write Who’s Looking?

A: The inspiration for Who’s Looking happened on a walk home from the park with my then-6-year-old grandson Kai. We paused to look at the ants scurrying around and, just to encourage some fun conversation, I asked him what he thought we might look like to the ants.

He liked that question, and we had a good chat about it – so much so that when he left for home, I started researching how ants “see.”

What I discovered was fascinating.  I had assumed that ants had good eyesight or how could they be so efficient, but I was mistaken. What else had I gotten wrong? I began researching other animals to see what I could discover. It was amazing! Who knew robins could see ultraviolet light or that rabbits could see behind them or that whales saw in grey and black?

The first iteration of the book was fiction, but an editor I knew was looking for nonfiction and I decided to change it to nonfiction for her. In the end, she didn’t take it, but to be fair it changed a lot from that first draft.

It was my agent who suggested I develop a story. I decided to set it on a farm in the Pacific Northwest and create a story with siblings who discover their environment. That also dictated which animals I could use. (I had to lose the giraffes.)

Q: What do you think Cornelia Li’s illustrations add to the book?

A: The first time I saw a rough illustration what struck me was the warmth Cornelia Li brought to the project. I was very focused on getting the science right, the seasons, the choice of animals, the variety of animals, and how each page would follow the other in an organic and yet exciting  fashion. Cornelia brought a warmth and intimacy to the characters that I love.

I also really appreciate how she separated how the animal sees from how the human sees in a way that was child-friendly – that was quite a feat! 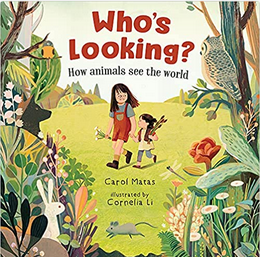 A: I joined National Geographic and used their website. I also used university sites and other prestigious science sites. I am fortunate to have a cousin who is a biologist who fact-checked the manuscript for me, and my editor was a science grad.

We really tried to get it right. The most difficult writing challenge was simplifying the science so that a 5-year-old could understand it.

In terms of what surprised me – just about everything! Robins are a good example. Did you know that they can sense the earth’s magnetic field? Wow.

But the main takeaway which I try to express at the end of the book is how differently we all see the world. That was what surprised me the most. If only we could see through each other’s eyes!

Q: You’ve written for different age groups--do you have a preference?

A: I can’t really choose a favourite age group to write for. But I can say that a picture book and a novel are totally different and yet very similar. I want to tell a strong, gripping story that children will relate to, and that they will enjoy. And maybe give then some food for thought as well! That is my goal, whatever the age.

A: I am really loving the picture book journey right now and have about a dozen stories in various stages and a few out on submission. However, at the same time I am working on three middle grade novels, also at various stages. One novel is set in Germany in 1938,  another is science fiction, and I am also working on a paranormal novel.

A: I have just published a novel called A Struggle For Hope with Scholastic in Canada and am hoping we can find a US publisher for it.

Set during the Israeli War of Independence in 1948, it follows a Holocaust survivor who must fight for her new country while confronting the past. The Holocaust section takes place in Auschwitz and tells the little known story of the rebellion there when inmates destroyed some of the crematoria.

It is very much a novel about the power of story. Ruth tells stories to heal, to help others heal, but also to warn about storytellers who can be dangerous - like Hitler. Unfortunately, with fascism on the rise all over the world right now it is very relevant as it also documents how fascism took hold so quickly – using story and lies.

Because Ruth is a storyteller I created numerous stories that she shares in the book - I loved that part – making up all these little stories. Often after writing one of the stories I would think, “Where the heck did that come from?” That’s the joy of writing.